Blasphemy in Lahore: They vandalised my school 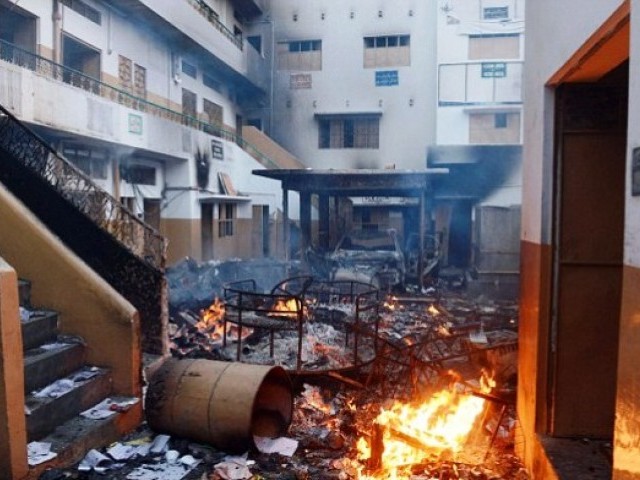 The verdict was out: the school was not to function there any longer and the protesters were not willing to wait for the outcome of legal investigations which had been initiated by the police. PHOTO: AFP

On October 31, a young girl Maryam, clad in a shalwar kameez and headscarf, looked down from the roof of her house located across the Farooqi Girls High School in Lahore, as protesters vandalised the school where she studied in grade three.

“We won’t be going to school for sometime Ami says,” she said to me, as the mob set fire to the school, where just a day earlier she had attended classes.

Located in a densely-populated area near Kareem Park, the school had been providing education to girls up to grade 10, with most of its former students now sending their children to the same school.

Owing to the nature of the blasphemy allegations levelled against the school administration and a sixth grade teacher, emotions of the protesters were high that day.

These charges stemmed from comments allegedly written by Iftikhar in a class 6 student’s notebook while checking a homework assignment to translate a passage about the Holy Quran and the Holy Prophet (pbuh) from English to Urdu. Photocopies of the offending page were being handed out at the protest.

As I talked to the protesters, I realised they had, it seemed, made up their mind. The verdict was out: the school was not to function there any longer and the protesters were not willing to wait for the outcome of legal investigations which had been initiated by the police.

The protesters took charge of the street on which the school is located, burnt its furniture and computers and spray-painted “Gustakh-i-Rasool” on the walls. A car parked in the courtyard was destroyed. For almost an hour, violent protesters chanted slogans and burnt down every single thing they could lay their hands on in the school.

Despite a heavy police presence of around 200 officials, protesters managed to not only vandalise the school but also attack law enforcement officials, eventually claiming control of the entire street, which soon turned into a battlefield. They charged on police officials from both ends of the street forcing everyone —police, journalists and even peaceful local residents — to take refuge in small alleys and on rooftops of nearby houses. Eventually, after having thoroughly demolished the school, the protesters calmed down, following intervention by a few elders of the area allowing the police to return.

But amidst the unrest, what was most disturbing was the helplessness with which local residents looked on as the mob vandalised and destroyed a 30-year-old school in front of their very eyes.

Matters of faith are, indeed, sensitive but does that justify the mob’s actions against the school?

If no, why did this happen?

If yes, then can somebody please tell Maryam where she should now study?

I failed to answer her query.

Read more by Aroosa here, or follow her on Twitter@AroosaShaukat

A reporter at The Express Tribune who has a Textile Engineering degree from the National Textile University in Faisalabad. She tweets @AroosaShaukat.

The genie does not fit the bottle anymore

Why give female reporters 'soft' beats?