What sandy did to us 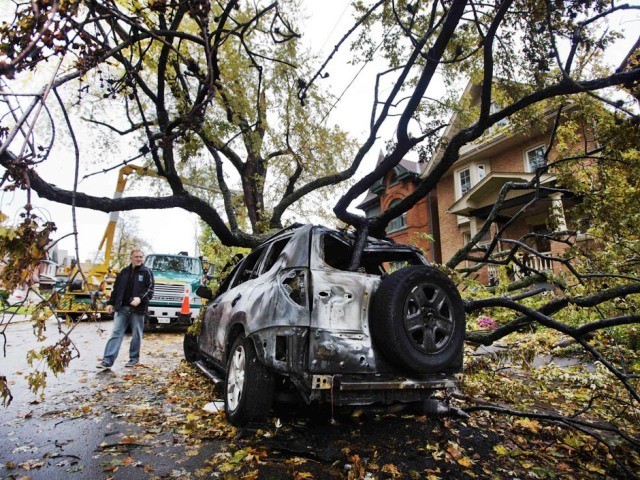 We couldn’t believe our ears when we heard about the absolute devastation that Sandy had left in her path. We decided to take a drive around the neighbourhood to see Sandy’s effects for ourselves. PHOTO: REUTERS

Throughout our lives as Muslims of Pakistani heritage, we have been told that guests are a cause for great celebration and blessing. However, Sandy was one guest that everyone, especially those living on the eastern coast of the United States, wishes had stayed away.

A few days before Eid, my editor emailed me and asked me to write a blog about the upcoming elections in the United States. A simple enough task to do, I thought, as our family is just shy of being officially qualified as political junkies. We wait impatiently for the debates and then discuss the implications of sentences and gestures for hours. We follow political analysts and forecasters and yell at them through television screens when their opinions show absolute disconnect from facts clear as day to us. We praise their analytical and interviewing skills when they manage to elicit responses from candidates or their representatives that determine the flow of public opinions.

In short, a blog on elections?

I figured I would get through the Eid weekend and then get around to writing the piece afterwards; at that point, Sandy was far on the horizon and not a cause for great concern. Only later did we realise how greatly we underestimated that hurricane.

My ears first perked up when meteorologists started saying that they had never seen a storm like this in their entire careers. That sounded rather scary, especially when some of these experts have had over twenty years of experience! They discussed that once in 1991, a storm like this had developed, but never made landfall. In spite of that, this ‘perfect storm’ had gotten enough attention to be the subject of movies and is still talked about in hushed whispers among weather forecasters.

This time, the ‘perfect storm’ was going to make landfall.

We prepared to lose power, maybe even for days. The south shore of Long Island and other coastal areas were mostly evacuated. Trains were stopped a day before the storm, and moved to locations where they would not be damaged by the salt water. People were advised to stock up on batteries, candles and water and then to hunker down and to wait for Sandy to pass.

Sandy hit land with the ferocity of a freight train and then just kept going. We lost power along with 90% of all other Long Islanders. The night of the 29th was spent listening to the wind blowing, with gusts up to 90 MPH, and the rain coming down in sheets. We ended up sleeping fitfully through the night as Sandy raged around us.

When morning came Sandy had mostly moved on. Since we had no power, we had to use a battery operated radio to find out how the rest of the affected areas had fared.

We couldn’t believe our ears when we heard about the absolute devastation that Sandy had left in her path.

We decided to take a drive around the neighbourhood to see Sandy’s effects for ourselves.

We live in the middle of the island, with the ocean about fourteen miles away; as far as destructiveness went, we were the least affected, and yet everywhere we went we saw devastation. Trees, some over 50-years-old, were uprooted taking blocks of sidewalk with them.

Some had fallen over, bringing down electrical wires. Others had crashed through people’s homes, while others still had crushed cars.

Shingles had flown off roofs, leaving people with pools of water in their homes. Men and women were walking around their yards; some were trying to assess the damage while others just looked dazed.

We continued to hear about the total destruction of seaside towns in New Jersey and on the south shore of Long Island. Sandy had focused her vicious gaze especially on the little town of Long Beach, Long Island, which was left in such utter chaos that even seasoned reporters were at a loss for words trying to describe the situation.

In the wake of Hurricane Sandy, the southern end of Manhattan Island was arguably hit the hardest. Especially sobering was the sight at the entrance to the Brooklyn Battery Tunnel. The tunnel had been closed in anticipation of the storm and the entrance had been blocked with a truck. When Sandy hit, both the East River and the Hudson came rushing over land and poured into the tunnel, in a sight that New York Governor Andrew Cuomo described as “frightening”. When the storm had passed, the truck that was blocking the entrance was now mostly submerged in the water that stood in the tunnel.

It has been four days and we are still without power, as is the majority of the storm-struck area. Thankfully, however, we are in our house and we are safe. The only news that we are able to hear is from the car radio while we are driving, something we try to do as little as possible because gasoline is becoming increasingly scarce.

Honestly, I really don’t know what has been happening in terms of the election over the past few days; the only thing I’ve heard is that President Obama was away from the campaign trail for three days as he surveyed the ravaged areas, and instructed all agencies to cut through the red-tape, “lean forward” and get the work done.

Right now, all my prayers are with those struck by natural disasters all over the world.

A graduate of Bolan Medical College, Zeba has been researching and writing for various organizations and websites. She writes from the perspective of the common man and tweets as @zebansari

President Obama's speech and the continuation of drone strikes

Democracy is nothing but a politician's catch phrase