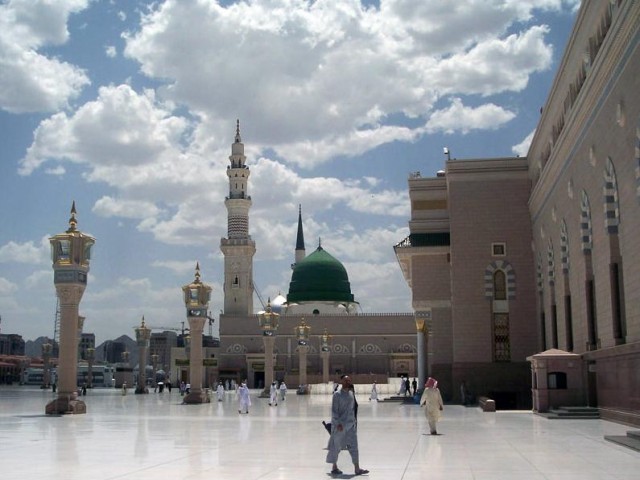 Muslims of the world are prone to delve into murderous rages over any slight offence to their religion, but choose to remain quiet when the very roots of early Islamic history are being erased. PHOTO: FILE

The current controversy of the potential Saudi demolition of Riyad-al-Jannah and the graves of Islamic caliphs Hazrat Abu Bakr (RA) and Hazrat Omar (RA) is one in a long line of projects that the world’s biggest exporter of crude oil has undertaken to erase Islamic heritage sites.

The Saudi obsession with everything concrete and steel is a cause of concern for Muslims around the world. The construction of enormous towers and skyscrapers, including the ghastly Mecca clock tower, tell us something about the future plans of the Saudis.

A 2011 report in The Independent titled “Mecca for the rich: Islam’s holiest site ‘turning into Vegas’” written by Jerome Taylor (who wrote the recent story about the planned Saudi destruction of Riyad-al-Jannah), says that the Saudis are planning to turn Mecca into a playground for the rich. They will do this by building sky scrapers and luxury hotels that cater to the rich Muslims coming from all over the world. The same newspaper reported back in April 2006 about the Saudi construction rampage in Islam’s holiest sites.

Systematic destruction of the holy sites and building hotels and resorts is being backed by the blessings of its religious clerics, who have taken upon themselves to erase sites whose significance to Islam is as great as any archaeological site pertaining to the early Christian or Jewish history in Jerusalem.

Such a work is being undertaken and not a voice is being raised. This is a cause of concern for Muslims around the world, especially if they are prone to delve into murderous rages over any slight offence to their religion, but choose to remain quiet when the very roots of early Islamic history are being erased (read: bulldozed).

However as it turns out, the Saudi kingdom seems to be on something more than destroying shrines and graves.

Even a cursory search reveals that the Saudis are embarking on real estate and renewable energy projects as they plan for the future post-2030. This is the period when it is feared that the supply of oil, which generates 86% of the kingdom’s revenue, might start to dwindle thus forcing the Saudis to import additional oil from other countries.

The Economist states that the rapid increase in demand for oil inside Saudi Arabia has increased by 37%. Moreover, 65% of its electricity is generated by the oil that it produces. For now, increase in oil price has caused the wealth of Saudis to soar, quite literally, and their construction of the Kingdom Tower is a testament to the money flooding in.

However the increase in oil consumption, the increasing American reliance on shale gas, the expectation that Canada and Mexico might become the new middle east. Moreover, the awareness of the fact that oil reserves would not last forever has led Saudi Arabia to consider alternate forms of revenue generation. These include real estate, Hajj (obviously), the banking sector and other renewable forms of energy.

Khalid al Falih, the president and CEO of Saudi Aramco, reflects the future strategy of the Saudis when he says that Saudi Aramco wants to transform from an oil and gas company to a ‘global energy and chemicals enterprise’. Apart from energy sources, the real estate sector is booming, thanks to the swelling population and the increase in tours by the increasingly affluent middle class of the Muslim world.

So how does the new course of Saudi economy relate to destruction of Islam’s holy sites? In this regard, my hypothesis is that the Saudis under the valid pretext of real state expansion are destroying the holy sites with the help of fanatical clerics who oppose reverence to any shrine or grave.

The real estate development and other modernisation projects can be undertaken anywhere in the kingdom, but it seems that the clerics are capitalising on this opportunity to erase the early history of Islam and increase their hold on the religion. Few countries have dared to raise voice against this heinous crime of the destruction of Islamic holy sites, fearing diplomatic repercussions that might arise. Yet we Pakistanis Muslims scream over the depiction of the Holy Prophet (pbuh) in the western media, burn buildings, kill people and block websites in protests but do not raise a single voice when the house of Hazrat Khadija (RA) is turned into a public toilet block, and when the Saudi Islamic affairs ministry declares that “the green dome (of Masjid Nabwi) shall be demolished and the three graves flattened in the Prophet’s Masjid”.

The time to raise voice against this crime of titanic proportions is now!