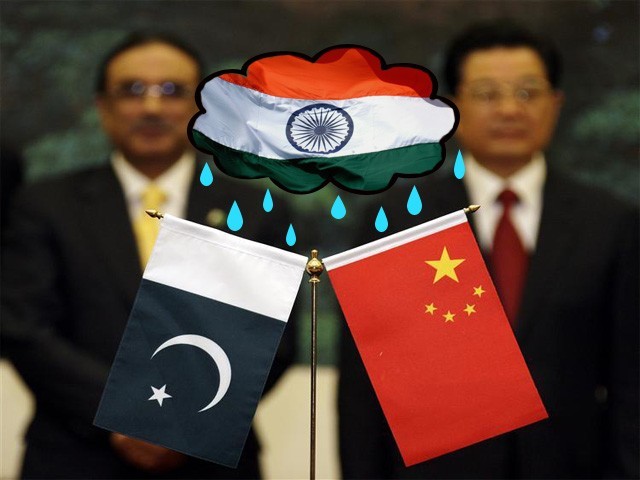 Unlike the Cold War standoff, one cannot argue that its rapprochement with India will affect China’s relationship with Pakistan because of the gravity of China’s interests in Pakistan. DESIGN: ERUM SHAIKH

China and Pakistan historically have enjoyed long standing, versatile and cordial relations. From the very beginning, in 1955, when the then Prime Minister Chaudary Muhammad Ali and his Chinese counterpart Zhou Enlai consolidated their support on mutual understanding, the relationship between the two countries have remained ‘tested by adversity’.

Pakistan was a key ally for China throughout the Cold War period in coping with India and the Soviet Union until the Gorbachev and Beijing reached and acceded to certain demands. However, many advantages were also accrued to Pakistan as a result of its alliance with a more culturally diverse,  communist country like China. It furthered Pakistan’s security, rendered Pakistan weaponry in the 1965 war with India and China adopted a pro-Pakistan stance on the Kashmir dispute.

However with the dawn of the current century, China’s relations with India and Russia have undergone a dramatic shift in strategic partnership from enmity to entente. In the case of Pakistan and India, the uncertain triangle of China-Pakistan-India has historically been constructed around the lines that the dilution of China’s relations with one country provides an impetus to China’s improvement in relations with other country. This current paradigm shift therefore gives rise to an important question;

What impact will the ongoing Sino-India rapprochements have on the Sino-Pakistan relations?

Will it lead to a weakening of Sino-Pakistan entente?

The answer I believe is no.

This is because there are essentially three underlying factors that continue to uphold the Sino-Pak cordiale despite China’s evolving economic relations with India and concurrent partnership with Russia.

The first rationale for China’s continued friendship with Pakistan lies in Beijing’s economic focus and its utmost priority of economic growth. During the Cold War, Pakistan was an important strategic partner for China in coping with India while at the moment China sees Pakistan in terms of its economic interests. China currently is the world’s second-largest consumer of oil. Apart from the significance of Pakistan’s strategic location, the Gwadar port situated in Balochistan has reinvented Pakistan’s regional significance as an energy corridor for China. China’s enthusiasm about the Gwadar port and its immense technical assistance to Pakistan is one such example of this economic co-operation between the two countries.

For China, the economic incentive for its heavy investment in the construction of this port lies not simply in all ‘weathered friendship’ dynamics between Islamabad and Beijing but in the strategic value attached to the Gwadar port, which for China is no lesser than that of the Karakoram highway.

This port provides China with the closest access point to the Persian Gulf and also renders an access route to the Arabian Sea’s warm water to many of the central Asian landlocked republics including the Chinese Xinjiang. Currently, China receives a majority of its oil supplies from the Middle East, but through this port Pakistan does not only provide China an alternate transport route linking from Pakistan instead of Iran and Sudan, but at the same time Pakistan has become crucial to China’s bid for regional influence.

Secondly, China at the moment is highly sensitive about the growing role of the United States in the region and the US leaning towards India in the Asian continent. To counter this, China perceives Pakistan as its best, if not its last, bet in terms of the diplomatic support which Pakistan historically has rendered to China. Whether it be the facilitation of the United States Secretary of State Henry Kissinger’s visit to China through the diplomatic support of Pakistan in 1971, or the question of China’s right over Tibet and Taiwan, Pakistan has always advocated full diplomatic support in favour of China.

Importantly as well, was Pakistan’s valuable support for China to gain seat in the United Nations.

Thirdly, China’s interest in a stronger Pakistan parallels its own interests. It tantamount to China, that the situation in Pakistan and Afghanistan does not get further exacerbated. For Beijing one way is to be aligned with Pakistan and cooperate in order to mitigate the outcome. Although China has its own reservations with US presence and its heightened activities in Pakistan and Afghanistan, it certainly does not want the US to fail in Afghanistan. A failure of such magnitude could eventually drive radical elements into Chinese territory and with radicalisation of the region also acts as a trigger for extremism and separatist activities within Xinjiang, where separatist activities are already at peak.

A weaker Pakistan under the influence of the Taliban, or any other extremist group, for China acts as facilitator between various entities operating in Afghanistan, Pakistan and insurgent elements in its own region of Xinjiang. Thus, a progressive and strong Pakistan also benefits China because it mitigates the violent outcome in terms of the criminal elements operating in the Uyghur region of China. Therefore, it is China’s own domestic interests that make its role in the Af-Pak struggle is of great importance and its support for a strong, independent Pakistan is crucial for its own geo-strategic needs.

On the Afghan front, China is vigilant of maintaining good relations with Kabul without offending the Pashtuns elements in the Taliban itself.

Thus, China today being a major power sees the world through the prism of its global interests. Unlike the Cold War standoff, one cannot argue that its rapprochement with India will affect China’s relationship with Pakistan because of the gravity of China’s interests in Pakistan.