This Eid, try these middle-eastern treats with a Pakistani twist! 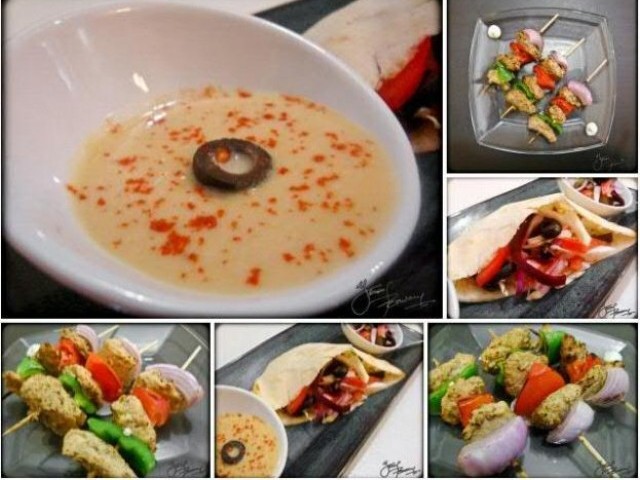 I’ve added a Pakistani twist to both recipes, so instead of a traditional Shawarma and Shish Tawook, I present to you the Roast Beef Shawarma with Hummus and Shish Malai Boti with Vegetables. PHOTO: YOUSUF BAWANY

Eidul Azha marks the remembrance of Prophet Ibrahim’s commitment to sacrifice his own son. Sacrifices aside, the thing we all look forward to most is the food and the endless BBQs that are sure to follow.

However, after a few meat-eating days, one (or shall I say ‘the stomach’?) finally deserves a refreshing break from all the heaviness. It’s often difficult to find the right balance between light and delicious; fortunately, there are a few middle-eastern staples that fit the bill. However, I’ve added a Pakistani twist to both recipes, so instead of a traditional Shawarma and Shish Tawook, I present to you the Roast Beef Shawarma with Hummus and Shish Malai Boti with Vegetables.

For the Roast Beef Shawarma with Hummus, this is what you will need:

Two to three cloves of garlic

Paprika or cayenne pepper for garnish

Take a pan and add all the ingredients for the roast beef into it; cook on low flame till the meat is tender and the water has completely dried out.

Wrap the meat in a foil and put it in the oven for three to five minutes on medium temperature. This step is optional.

Take it out of the oven and let it cool. Cut into thin slices and set aside.

Put garbanzo beans, sesame seeds, olive oil, garlic, yogurt and salt into a jug and blend till everything is a smooth paste; set it aside in a bowl.

Cut pita bread into half and spread a tablespoon of hummus on the inside.

Add two to three slices of roast beef to it.

Top it off with onions, iceberg lettuce, cabbage, pickled vegetables and tomatoes.

Serve with a side of hummus (garnish with paprika/cayenne and olives) and pickled vegetables.

Note: You can easily pickle vegetables at home. Just dice the veggies you wish to pickle and mix them in vinegar, some salt and sugar. Heat this mix in a pan for five to seven minutes to get instant results.

To make Shish Malai Boti with Vegetables follow this recipe:

One small piece of hot coal

Mix all the ingredients in a bowl for malai boti and marinate the chicken for an hour.

Put the marinated chicken in a pan and cook on medium flame till it is tender.

If you like adding a smokey flavor to the chicken, (a) take a small steel bowl and put it in the centre of the pan, (b) place the hot coal into it, (c) drizzle the olive oil on the coal, (d) cover the pan immediately, (e) let it stay for two to threee minutes.

Once the chicken has cooled significantly, put the individual cubes onto bamboo skewers interleaved with pieces of tomato, onion and capsicum.

To give the skewers a slight char, place them directly over a flame; be careful not to set the bamboo skewers on fire.

Serve with a side of tamarind chutney or mint raita.

Enjoy these delicious treats warm with your family and friends this Eid!

The original version of this post can be seen here.