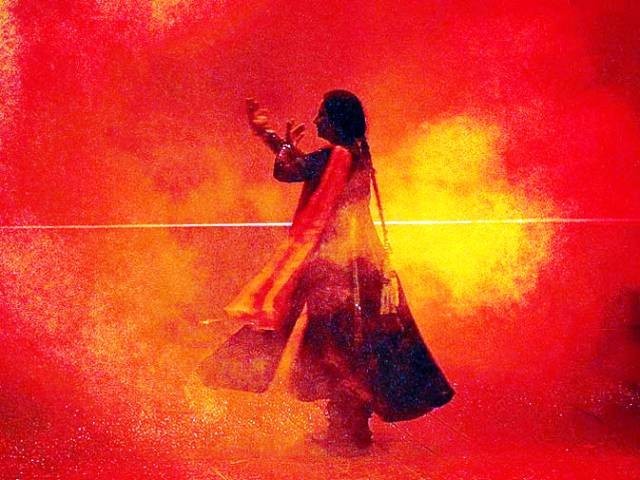 Floating across the stage with exquisite delicacy on the composition `Raks Karo`, Sheema Kirmani seemed to embody the natural grace. The performances carried powerful messages of gender equality and a demand for change in attitudes. PHOTO: AFP

At the second South Asian Women in Media conference in Bhurban over the weekend, there were no simple answers to address all the concerns raised. But there was a unanimous resolution to fight the rightwing propaganda that is increasingly dominating the media and the regressive mindset it represents.

Women as journalists, anchors, actresses and directors are breaking stereotypes. They are braving death threats from militants and fighting harassment and discrimination. The delegates were from diverse backgrounds and represented a cross-section of the media. We endorsed a declaration to oppose restrictions on freedom. But more important than any document was the collective resolve to unite in the face of threats to media and individual freedom.

More than 200 journalists and artists have signed a petition to register their protest against a case in the Supreme Court soliciting judicial intervention to define obscenity for the media. As far as affirmative action goes, it was a small step, but an assertive one nevertheless.

It is time obscenity is defined in terms other than a woman’s body or her clothes. In a country where an aversion to freedom of expression extends to aesthetics and the fine arts, the definition is likely to be abused to stifle the broadcast of embarrassing truths.

In view of the fact that religion is exploited to restrict free expression, it is all the more important to resist a superimposition of a framework that curtails freedom. Delegates were unanimous in their view that the media can regulate itself best when it comes to censuring objectionable content.

The women present wanted to see themselves portrayed in bold and independent roles in sharp contrast to the oppressed female characters dominating the airwaves. Sheema Kirmani seconded the delegates;

“Every week I stage street theatre for marginalised communities and women always come forward to appreciate the strong female characters in my plays.”

Samina Peerzada said she had now refused to act in plays which depicted women as weak.

“It is important to continue the tradition even if successive actresses take on roles we refuse.”

Madiha Gauhar ended her career in television because she did not want to promote subservient women as an ideal.

On the sidelines of the conference were touching instances of sisterhood in which delegates reached out to each other for advice and support. The women I talked to wanted to make a difference. They wanted to learn how to fend off harassment and sexism. They were confident of their abilities and wanted a chance to prove themselves.

With greater opportunities, come greater challenges, and if there is one thing every journalist should internalise, it is to stand up for their rights and those of their colleagues and make their contribution count. Create an environment where everybody is respected and not expect their organisations to implement gender policies. We cannot afford to wait for others to create an ideal world for us; we have to take responsibility for ourselves.

The mediascape has changed in the last decade and with the advent of more women in the ranks, the perception of an all-male newsroom stands forever shattered. It is now up to the women to fight sexism at the workplace and in the stories and programmes they produce.

Faced with an onslaught of an increasingly vocal right wing and support for regressive policies, women need to raise their voices to be heard.  We can best promote an alternative narrative if we act in concert.