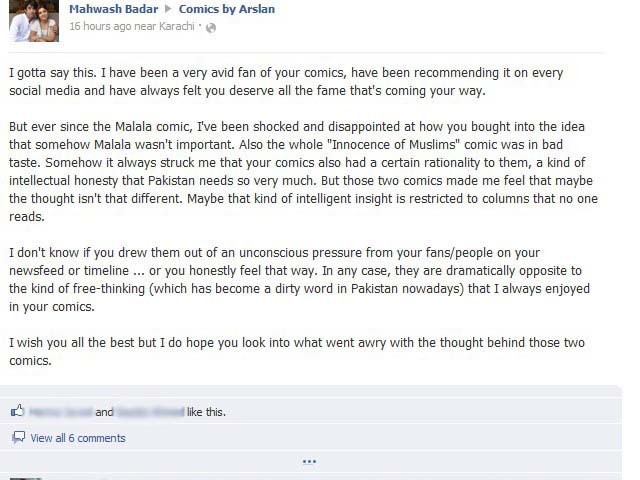 I posted this comment on the page and the reply I got was shocking! PHOTO: SCREENSHOT

It takes a certain degree of egotism to bring me to this level of hot-headedness.

This page has been on Facebook for a while now and I have categorically expressed many times that this man is very witty and makes some great comics. They’re a little too slapstick at times, but this is not a critique or a comment on his comical abilities.

In Pakistan, anyone who even gets two posts published in an online magazine gets to consider themselves a demi-god. If you’ve got more than a few hundred followers on Twitter, you’re a celebrity. If you get two blogs published in The Express Tribune, and you’re a social critic who can end all of the world’s problems if you had the chance. If you have a few hundred people liking your photography page, you’re the next Annie Liebovitz. If you can make slightly legible stick figures, you’re Leonardo da Vinci. If you can write two witty statements coherently in your status update, you’re fit to be holding the editorship of The New Yorker.

The whole attitude is befuddling. Social media is producing more and more egotistical, maniacal, self-involved narcissists than ever.

Then there are the people who hero-worship these self-obsessed narcissists, and these gushing fans have no idea what their breathless adoration is doing to the growing egos of these megalomaniacs.

Yesterday, when I posted the following words, on ‘Comics by Arslan’, I could hardly contain my surprise at the reaction I got.

“I gotta say this. I have been a very avid fan of your comics, have been recommending it on every social media and have always felt you deserve all the fame that’s coming your way.

But ever since the Malala comic, I’ve been shocked and disappointed at how you bought into the idea that somehow Malala wasn’t important. Also the whole “Innocence of Muslims” comic was in bad taste. Somehow it always struck me that your comics also had a certain rationality to them, a kind of intellectual honesty that Pakistan needs so very much. But those two comics made me feel that maybe the thought isn’t that different. Maybe that kind of intelligent insight is restricted to columns that no one reads.

I don’t know if you drew them out of an unconscious pressure from your fans/people on your newsfeed or timeline … or you honestly feel that way. In any case, they are dramatically opposite to the kind of free-thinking (which has become a dirty word in Pakistan nowadays) that I always enjoyed in your comics.

I wish you all the best but I do hope you look into what went awry with the thought behind those two comics.”

(Comic on Innocence of Muslims. PICTURE: COMICS BY ARSLAN)

“Baji you on periods?”

I could only roll my eyes. That sounded so typical eighth-grade male, I wanted to laugh after I had rolled my eyes. I didn’t want to think more about it so I wrote:

A friend of mine agreed on my post and said that the comics were often homophobic and sexist. One of my friends, who was on Mr Arslan Naseer’s friends list, brought this issue to him and he told her to ‘f**k off’.

The replies to the post are hence pasted in this image below.

I hope this screenshot helps you see the kind of mentality that these so-called ‘artists’ are creating for the masses. If you’ve ever been a fan of this page, like I was, perhaps it is time to give these comics a serious thought. I don’t like armchair activism, I don’t like Facebook fights, and I don’t like politicising issues that just have opinionated authoritarians instigating them. But apparently when I get ‘banned’ from the page, along with my two other friends who supported my argument, it was taking it too far.

So much for free speech in this country.

I don’t expect much to happen since I was banned for simply not gushing over the comics. Somehow, people in this country are having harder time accepting responsibility and, in the meantime, having a grand old time enjoying the hero-worship that comes along with social media.

It’s interesting to note that this attitude is just fuelled by social media – and is not an exclusive product of its volume.

I just got almost run over by a car and instead of apologising to me, the driver began shouting at me. I was walking out of the hospital with my two-year-old boy in my arms, and he had the nerve to yell at me for his own needless speeding in a pedestrian zone.

I walked out of there too, after a few choice words. I walk out of most situations now because there is no point trying to tell people anymore that they are way out of line. Whether it’s the Taliban, a lack of education, or corruption – Pakistanis just don’t like being criticised. Why would we? It’s all done by the Yahoodis and the Amreekis and the Hindustanis anyway ─ a thought that is often purported by pages such as these. The kind of mob mentality that Pakistan is suffering from is often clearly seen in the comics at times.

I get it; it’s social media, everyone’s got an opinion and everyone’s a hero. That’s the magic of the internet. Some idiot can pretend to be a total saint and a totally normal person can be made out to look like a villain. But don’t go around insulting other people for doing absolutely nothing except differing from your politely-stated, non-adoring point of view.

Humourists of any society are always the bravest people. People who can laugh at themselves as well as others. They are the people who will help resolve serious issues with wit and comic relief – so that people can stop feeling so intensely about it. That’s where freedom of speech comes in. Comic artists, comedians, and sketch artists are able to make jokes because people in the audience are able to accept criticism. Freedom of speech and acceptance of criticism is how these people make a living and create an art out of it.