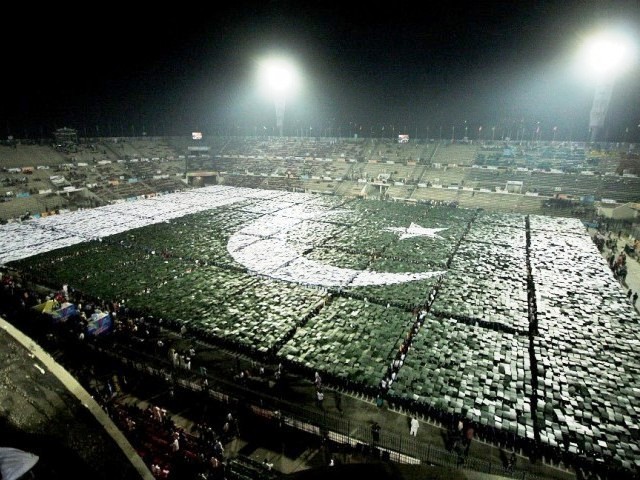 Pakistan soared in to the international news once again on October 20, 21 and 22, but this time around it was a happy moment for everyone! We made it into the news for something positive and progressive. (Some kids run with the Pakistan flag prior to the record attempt in Lahore. PHOTO: SHAFIQ MALIK)

In a country that is so accustomed to digesting the news of target killing, honour killing, bomb blasts, terrorist attacks and drone strikes, the news of Pakistan setting a record after record brought nothing but moments of pure joy and national pride to us. Amidst all the sad news and negativity, these small events serve as ventilators that bring in fresh air for those of us who seem to have lost hope. (Saddi Muhammad set a record by using his moustache to pull a 1.7-tonne pickup truck a distance of 60.3 metres. PHOTO: AFP)

The Punjab Youth Festival (PYF12), renamed as the ‘Pakistan Youth Festival’ by Chief Minister of Punjab Shahbaz Sharif is void of any political affiliation. It is a one-of-its-kind initiative for the youth of Pakistan; an opportunity for the common people of this nation to spread hope and the vision of progression. (12-year-old Mehek Gul took just 45 seconds to arrange the pieces on a chessboard using only one hand. PHOTO: AFP)

I sincerely hope that all Pakistanis enjoyed witnessing these events in their respective provinces and cities.

Although I wasn’t physically present at the National Hockey Stadium of Lahore when these records were broken, I witnessed and recited the national anthem along with the 44,200 participants who sang it. It felt great; a moment of pure national pride, unity and sheer pleasure. There have been only a few times this year that Pakistan made its presence felt in a positive forum, and this record setting activity has, by far, taken its place at the top of the list. Amongst these records was that of 24,200 students holding up sheets of paper to form and break the record of the largest national flag record. With patriotism pulsating through the veins of all those watching, we knew that this day was going to bring smiles to the faces of millions of distressed, agitated, disappointed and worried citizens. It was a moment of collective realisation and pride; it is these little things that will help build the image of our country in the international arena. Amongst other news that became a source of jubilation for Pakistanis were the exhibition matches between Pakistan XI and International World Stars XI, showing the world that Pakistan was making its way back into international cricket.

Many believe that all the terrorists and Taliban of the world are manufactured and exported from Pakistan. However, on that day, perhaps only for that one day, social media forums turned green. People texted, tweeted and posted congratulatory messages to one another, and the unity and public acknowledgement was overwhelming!

This happy episode continued until I came across the unfortunate cynics who are the sole reason for the disparity and discontent in this nation. These were some of the truly disappointing tweets I came across;

Regardless of political hatred for the Punjab government or PMLN, we should have all partaken in these moments of national pride in a time when all we get is bad news. Yet, PTI trolls took to social media forums, not to boast their nation’s newest achievements but to belittle it and spew hatred against the Punjab government for corruption. The Punjab government spent billions of rupees on PYF12, yes, and if that is what corruption looks like or if that is where all the ‘looted’ money goes to, then so be it; I will happily accept this reality. Unfortunately, what all this proved is that political hatred in the nation is greater than patriotism or love for Pakistan. Political leaders and opinion makers need to divert their attention immediately to this misfortune before it becomes an even worse epidemic than it is today. This division between loyalty to the country or to a political party is not only disturbing. it is the cause for many of the problems Pakistan faces today.

This brings two simple questions to my mind that I would like to ask all the self-claimed-revolutionists out there:

1-  If this money could be so well used otherwise, why didn’t they donate all the money for the rehabilitation of drone victims instead of creating all the hype and drama for the so-called ‘peace march’?

2- Are these records building Pakistan’s image or the Punjab government’s image? Who participated; common man or political workers? In case PTI comes into power, should we expect no-sports in Pakistan, since it’s such a waste of time and money?

In my humble opinion, we’ve already suffered a lot and the reason behind this is our inability to unite. We are so segregated by these ‘classes, be it ethnic, political, sectarian or social. We cannot rise unless we break free of these barriers that are keeping us separated and injecting intolerance and hatred amongst us. It’s about time we put in a combined effort for the sake of Pakistan alone – beyond political bias – and learn to give credit where it’s due. Let us unite and cherish these moments of national pride and joy together, and show the real soft image of Pakistan to the world.

A telecom professional, Abrar holds an MBA degree in marketing. He tweets as @Abrar_kureshy twitter.com/Abrar_Kureshy and occassionally blogs at abrarkureshy.wordpress.com