A true patriot lost with the demise of Chacha Pakistan 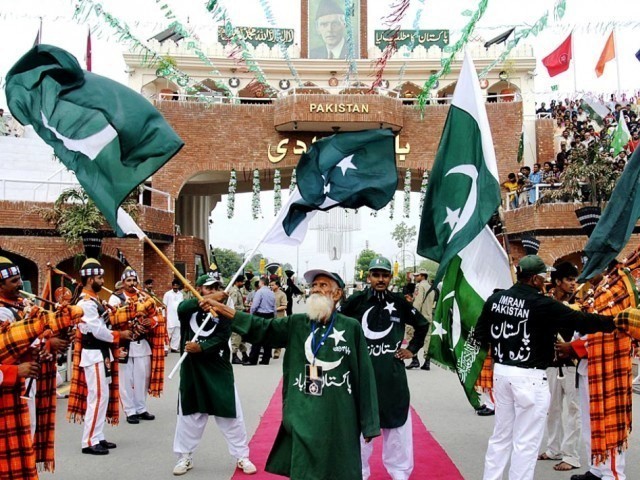 Pride of the Wagah Border, "Chacha Pakistan" passes away at 90. PHOTO: ONLINE

A man called ‘Chacha Pakistani’ was at the flag lowering ceremony at the Wagah border every single day of the year.

The flag lowering ceremony, a ceremonial thumbing of the nose by the troops of India on one side and Pakistan on the other, has taken place at the Wagah border since 1959. Even though the contempt has since been toned down, it remains a sort of civil baring of the teeth on either side, or as Michael Palin described it, a ‘carefully choreographed contempt,’ of one neighbouring country for the other.

Born Mehar Din ninety years ago, Chacha Pakistani moved to Pakistan a bit after 1947.  Never married, or, as  far as one can tell employed, he lived with his nephews and imposed this border routine upon himself after the 1971 hostilities between India and Pakistan. He donned his special clothes every day: the green Pakistani flag complete with the crescent and star made into a long shirt, a white shalwar, and a green hat. His white beard and erect bearing, coupled with his resonant patriotic slogans audible well across the border, rendered him somewhat larger than life, as much a distinctive feature of the ceremony as the exaggeratedly turbaned soldiers on either side. So much so that the Pakistan Rangers were moved to confer an award upon him for his services to the nation.

When he recently failed to appear at the border for some days, however, officials do not appear to have enquired why. The reason of course was that sadly, following a period of illness, Mehar Dina aka Chacha Pakistan died yesterday (Sunday, October 21,  2012) at the age of 90.

When larger than life personalities die it is almost too mundane an act for them to be caught at, something they’d never do while alive, not but what a person only ever dies while alive… but you know what I mean.

It appears that Pakistan can boast more than a single ‘Chacha’. There is the other Chacha Pakistani, a Mr Jawed Akhtar…and a Chacha Cricket, a Mr Abdul Jalil. Jawed Akhtar is known for travelling from mausoleum to mausoleum (Jinnah’s to Iqbal’s) on his motor bike, every year, trying to raise patriotic sentiment among the youth, while Mr Jalil is a sort of live cricket mascot, adopted by the Pakistan Cricket Board, a familiar figure at every cricket match played by the Pakistan team.

It makes it an interesting reflection…all these Chachas, why do they do it?

Why did Mehar Din, make such an effort to get to the border daily for the past 40 years and shout his support for Pakistan every single day?

Is this being a patriot?  Which is what, exactly?

Mark Twain was not too impressed with patriots, because he defined a patriot as a person who hollered the loudest without knowing what he was hollering about.  Adlai Stevenson, on the other hand defined patriotism as the tranquil and steady dedication of a lifetime, rather than short, frenzied outbursts of emotion.

Chacha Pakistani lived in the small Pakistani village of Chandrai near the Wagah border. When I say ‘near,’ I mean in terms of a comfortable ride in one’s own car, because Chandrai is just 40km from the border.  For Chacha however, who neither owned nor drove a car, to attend the flag lowering ceremony meant a hitched ride or two and even a walk part of the way every single evening, for the past 40 years.  Surely, this is a tranquil and steady dedication of a lifetime, even though he did holler louder than everyone else once there.

The origin of the saying that ‘there is more than one way to skin a cat’ is lost in the mist of time, but every so often someone comes along who lives the idiom. The various Prophets of history have stressed that each man worships according to his ability, and worship manifests itself in different guises. Was it the Prophet Moses who received a divine reprimand for chiding a woman on her very personal method of demonstrating devotion to God? The same surely applies to other sentiments, including patriotism.

It is not within every man’s power to build bridges, or lay down his life for his country (in fact not everyone who can does build bridges). Patriotism, like religion, has to be an expression of love for a homeland to the best of a person’s ability. And against such a definition, Mehar Din was a patriot, because he was steadfast in the expression of his love for his country, to the best of his ability, almost all his life.

May his soul rest in peace: Amen.