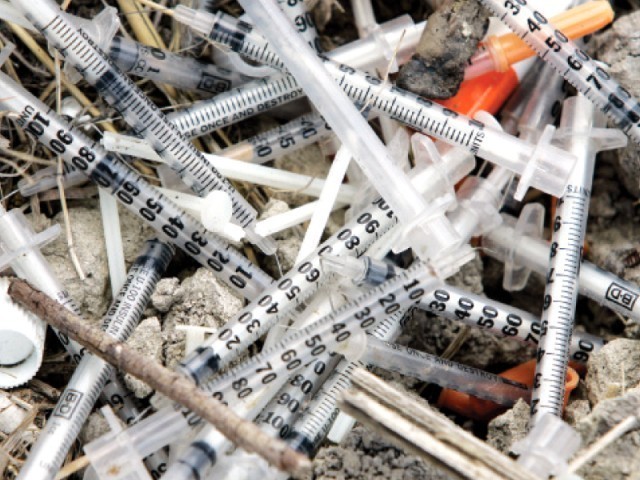 The unhygienic practice has been going on for years as there is very little legal accountability of those engaging in acts of selling hospital waste. PHOTO: FILE

Instead of incinerating the infected disposables, they inserted them into a crusher installed on hospital premises and sold them for higher prices. The crushed infected plastics travel to plastic scrapyards, situated along Lahore’s Bund Road, and are further treated for making straws, plastic cutlery and dishes.

The unhygienic practice has been going on for years as there is very little legal accountability of those engaging in acts of selling hospital waste. Shalamar Hospital is not the only institute selling infected plastic waste. The list goes on to include the Services Hospital and the Children’s Hospital, of which the latter possesses two incinerators and collects the waste of 25 hospitals for incineration.

Currently, seven hospitals across Lahore have incinerators but only three are in use. Despite several actions taken by the Environment Protection Department (EPD) in recent years, under its Hospital Waste Management rules 2005, no significant improvement towards proper disposal has been observed.

According to an EPD survey, only 10% of waste is being incinerated in Lahore. Hospitals produce 1,500 tonnes of Lahore’s 6,000 tonnes of waste, which is disposed daily into the Mehmood Booti dumping site on the city’s outskirts.  However, a large portion of this waste is also being sold.

Legal actions initiated — many times — against units using the plastic scrap and against hospital administrations selling it have gone in vain. The reason is that the Punjab Environment Protection Act 2012 is too weak to pursue the cases effectively and the EPD is too inadequately staffed.

An EPD inspector, working for five years and tasked with the responsibility of checking the hospital waste, rightly puts the problem,

“The doctors have a cut, the sanitary workers have a cut and so do the nurses. Not many report the nuisance or diseases it is spreading. Once the hospital waste mixes into garbage, the bacteria multiply”.

The dengue outbreak of 2011 has resulted in the Punjab Health Department hiring 88 inspectors to research mosquito larvae and figure out how to eradicate them. If this problem could be fixed, so can the problem of plastic waste, especially if the chief minister of Punjab intervenes and takes direct action.

A solution to Lahore's traffic woes