Can the jirga and women co-exist? 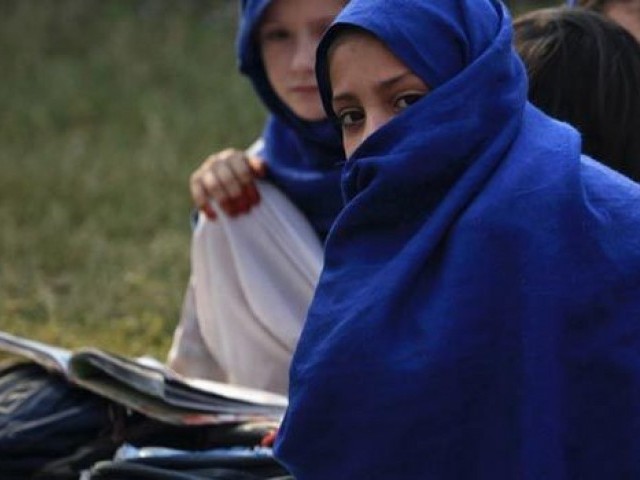 A loud screech from the speakers drowned out the last word of the lecture ─ the word which happened to be ‘peace’. Nervously, the girls leaned forward to make sure they missed nothing else. They were to write an essay.

Their teacher, her voice thick with distaste, pronounced the words,

“…the existing judicial system and its failings, and how the jirga can help…”

But the rest was lost again as a throat was cleared explosively, and the azaan burst onto the airwaves.

Shifa rubbed hard at her eyes. Damned if she did and damned if she didn’t, this was the gist of her thoughts ─ turbulent images that broke her mental barriers only too often, frequently into reality.

The drones had come again last night, and there was screaming within and without. This time no one was killed. However, the week before, one moment a young cousin was scattering grain for her chickens, and the next, a tail of sound whipped through the air and she was gone, like a comet.

“It is a curssse from Allah (SWT),” the mullah had said softly, one hand beside the shrouded body on its bier.

Then, as now, everyone leaned in to catch his words. It was not normal for mullahs to whisper, and this one’s sibilant delivery invested his speech with an undercurrent like a slither on frozen undergrowth.

Shifa’s father had frowned and looked at his feet, and from behind the curtain, Shifa hugged him in her mind. She knew his thoughts, and shared them, but in this they were alone.

Shifa’s mother had never learnt to appreciate her freedom. She wanted ‘normalcy’, which to her mind was the way her sisters lived. Each of them was a prisoner and a slave in her home, and often upbraided her husband for what she perceived as his laxity and indifference in his rearing of their daughters.

“Tahira is never allowed to set foot outdoors,” she snapped, scrubbing her dishes, and throwing them aside. “And here are Shifa and Sidra walking to school (thump!) and back every day (clatter! crash!). Why can you not teach them at home? (crash!) Why do they even need school? (bang! thud!) I never went to school, and look at me! My only problem is you, and….’

It was the daily tenor of their home life ─ a repayment for her father’s wisdom. Shifa wondered which would give way first, their very existence, or her father’s spirit? Both were battered so mercilessly on every side. Although it was his strength that bolstered her resolve, there was, for now, little else he could do.

Shifa yearned to know the reality of things, about why some things were presented in clean wrapping when inside they were otherwise.

She believed there was a reason for every problem and a solution. This, her father had taught her.

Once when she cut her finger and it bled, her mother tried to bandage it immediately, but he stopped her for a while.

“Look, Shifa, see how you lose blood, more when you hang your hand limply by your side than when you hold it up?” he raised her hand above her head, her fist clenched, “Like this,” he said, looking into her eyes. She understood.

“It will not stop until your cells makes a little net like your muslin chaddar, to trap the blood inside the cut,” he said, and they smiled at each other, each knowing that the other thought of the various ways, good and not so good, in which nets trapped things.

Every day when he changed the bandage, he showed her the skin knitting over the wound.

“It takes time,” he said softly, his whisper a promise.

So Shifa knew the jirga was no solution, because a year ago in one of several instances in Shifa’s short life, her 14-year-old friend was trapped in marriage to 70-year-old Tahir from another tribe, since the jirga said that her brother had seduced Tahir’s sister.

“The big court in the city has still not even given a date for the hearing,” Shifa’s mother scoffed, “and here’s the girl married and settled already.”

Shifa would rather be shot than be ‘settled’ with Tahir, but she knew she was wrong even to think in such terms. Only the day before she ceased to exist under the drone, her cousin had wished for something out of the way to happen to her, for once in her life.

So, “A jirga is not a solution to the deficiencies of the judicial system in our dear watan (country),” she wrote that night. “It is cruel…”

But for the first time in her life, her father disagreed. He snatched her book from her, and tore up the page. Pale and shocked, Shifa’s hands balled into fists by her side, and the blood thundered in her ears.