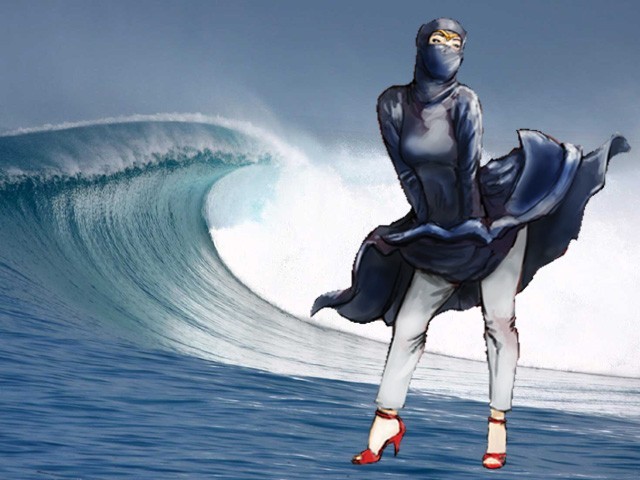 Shame on us because we have liberal fascists and murderous mullahs, burger bachas and smelly bun-kebabs, but no true Pakistanis. DESIGN: JAMAL KHURSHID

Pakistan is at a crossroads, a critical juncture, staring into an abyss that is winking back at us and making inappropriate kissy noises.

Or was that the other way around?

Doesn’t matter. What matters is that we have to choose ─ choose between light and darkness, between progress and decline, between de-caf and double mocha. It remains to be seen if time will tell if we will wake up. In any case, shame on us.

Shame on us because we have liberal fascists and murderous mullahs, burger bachas and smelly bun-kebabs, but no true Pakistanis. We have bathtub tsunamis and disrespectful bakery boys. We’re part Arab, part Indian, all idiot and possibly one-tenth brain-eating amoeba. We also hate our women who hate themselves because some of them choose to cover their heads clearly indicating that they have internalised the dominant patriarchal paradigm that oppresses them even though they are living perfectly normal lives and their husbands walk in fear of them, but they’re still oppressed, and why oh why won’t they just let us liberate them? When will al Huda start teaching Gloria Steinem? When will Jamia Hafsa stage its fashion week?

For that matter, why aren’t there drone strikes in Karachi? When will Imran Khan march against the guy who cut me off at the last signal when I was running a red light while tweeting and checking out the sweet looking girl getting into a rickshaw? Yes, rickshaw. Why are you so elitist that you’ll only ogle girls with LV bags? When, oh when will we unite as one? The green of our blood is running with streaks of white and confusing blood banks from Karachi to Khyber.

I’ll tell you when, because the six bots who follow me on Twitter are a clear indication of my massive support. Because the three blogs I wrote, including one on my dead cat, qualify me as the cross-dressing Christiane Amanpour of Pakistan. It’ll happen when we put the ‘Khuda’ back with ‘hafiz’ and the ‘z’ back in ‘Ramadan’.

It’ll only take place when we purge ourselves of all Western influences apart from our favourite TV shows, computers, phones and blue jeans; when we stop having horrific customs like mehndis where unmarried women dance to the accompaniment of Salman Khan numbers. In short, not until the paint job on my brown horse is compete and I ride him to Delhi when the Ghazwa-e-Hind begins.

In any case, and with all seriousness, the government needs to take immediate notice of this with an iron hand or we will remain as rudderless as a, well, boat without a rudder. At least, that’s what my sources, who cannot be named due to their not existing in the four dimensional framework we so naively call reality, have to say.

The writer, currently magazine editor of The Express Tribune has either suffered a mental breakdown or has tabulated every single cliché into one glorious and awe-inspiring whole. Take your pick. No actual clichés were harmed in the writing of this piece. Allegedly.