Where labelling has taken us 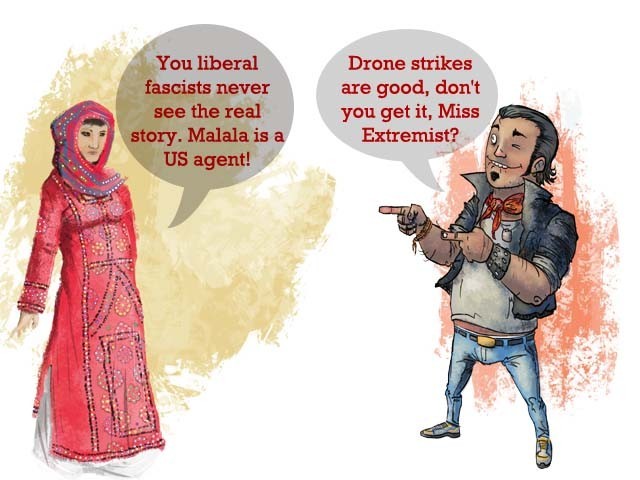 It is not so much about these arguments and them being right or wrong, but rather the fact that how even the most educated amongst us are willing to jump to conclusions, which upsets me. DESIGN: JAMAL KHURSHID

I hate it when people become judgmental. More, so, when they pounce to those judgements listening to only a singular opinion of yours and conjecturing the rest. It has happened many a times. I criticise the Taliban – I’m an American lackey. I defend Taliban – I’m a fundo. Similarly, if I attack women for crying too much about nothing, I become a misogynist. If I defend them, there would certainly emerge at least one person who would label me a western agent.

It is not so much about these arguments and them being right or wrong, but rather the fact that even the most educated amongst us are willing to jump to conclusions which upsets me.

Perhaps that Aristotelian notion of ‘education enabling a person to entertain a thought without accepting it’ is lost on many associates of mine.

Perhaps our education is to be blamed for that too.

Hardly ever are we taught to analyse here in Pakistan. Rote learning is the rule of the day. More importantly, we are made to learn to espouse the opinions of others. Respect we must, but what good is an opinion if we agree with it just because one of our elders is a propagator of such. A society beset with lack of debates and curiosity is bound to create extremists.

We think upon bipolar lines. Our thought pattern has become binary. If one doesn’t agree with me he must have a hidden agenda. He must be the other kind. There is no idea of modernity. There is no place for the central path. Islam may state; “We have made you the bearers of the middle path, so that you may witness the truth of others”, we are adamant on showing to the world the ‘truth’ ourselves.

I’m anguished by how people believe you have to be on the either end of the spectrum. Tell them you believe drones are counter-productive but that America is not so bad either and they’d blame you for shying away from stating your opinion and perhaps even of being confused.

I’d learnt to hate the crime and not the criminal. I do not believe people are incorrigible. I do not think some of us are better dead, because I’m nobody to be making those decisions.

Whether we talk of the holy war or the latest debate on blasphemy, the idea of conspiracy has made us paranoid. And in that paranoia we look for the devils where there are none. Anybody stating a contrary opinion has to be prosecuted. And what would a trial be without some magnificence. Let us show the world what we do to ‘their’ agents and ‘their’ spies!

So it should not come as a surprise if a certain somebody is lynched in such a country because he refused to be a part of a rally against blasphemy, a rally that was more detrimental to our interests than any western conspiracy could ever be.

It all stems from that labelling.

One day you create a class of people, the next you’re threatened by them. And thus pursues the internecine battle. The difference of opinion is the essence of democracy. We, however, have become so distrustful that anybody who questions  one’s wisdom has to be quietened. The prospect of a discourse to find the solution to such conflicts of ideologues has become out of question. Raise a voice against the popular notions and be certain of becoming history.

We desperately need to change this narrative. Let us learn to respect others opinions; let us realise there is a path that lies in between the extremes and let us agree to disagree. Only then will we be able to contain this tide of extremism. That is our only solace, for the Frankensteinian monster that has been unleashed would consume us all otherwise.