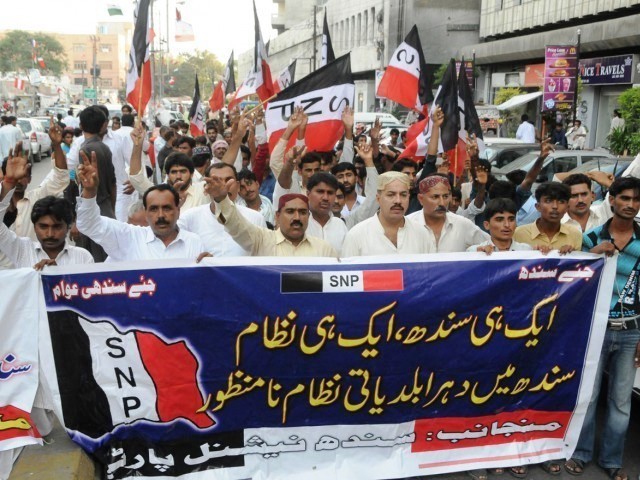 It has been observed that the PPP always takes decisions in a hurry and then tries to justify it with further wrongdoings. PHOTO: IRFAN ALI/EXPRESS

The new Local Government Ordinance, since its promulgation and passage in the Sindh Assembly, has become a source of nuisance. On one hand, nationalist and other parties strongly oppose it, terming it a conspiracy towards the division of Sindh, while on the other hand, PPP ministers and members exert their energies to a great extent to prove it beneficial for Sindh — with whatever knowledge they possess about the new system.

Though people throughout Sindh are agitated against the controversial new system and violent protests claimed a life in Shaheed Benazirabad, a bigger tragedy took place in Khairpur, where six persons were gunned down and 10 others injured in a public gathering organised in favour of the new local government system. Loss of property can be compensated, but loss of human life is never recompensed, no matter how much money is paid to the victim’s family.

It has been observed that the PPP always takes decisions in a hurry and then tries to justify it with further wrongdoings. The case of passing the new local government system is similar, which was promulgated at midnight and passed in the assembly within a half hour, ignoring protests of members from the PML-F, PML-Q, NPP and the ANP in the assembly and millions of people outside the assembly.

Nationalists claim that they are the sons of the soil who love their motherland and can make sacrifices for it, while PPP leaders also express their love for Sindh as do MQM leaders.

Given this, who is to be blamed for working against the interests of Sindh?

One can easily understand why the nationalists are protesting against the controversial ordinance. It is because they are out of the power corridors and feel deprived of the opportunity to debate on the issue. But it is not understood what makes the PPP stage rallies in favour of the ordinance, consequently putting the peace of the province at stake.

Had the PPP done anything for the welfare of the people, it wouldn’t have needed to use government machinery to organise rallies. The PPP leadership should refrain from such activities because any wrong move could trigger a civil war in the province for which the PPP alone will be responsible.