Mirror mirror on the wall, who is the skinniest of them all? 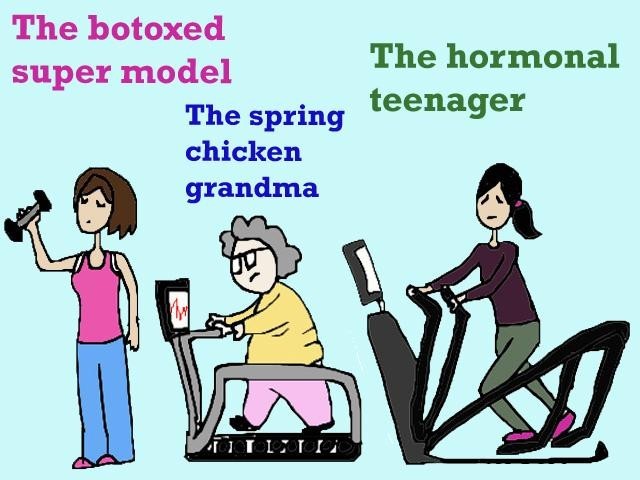 Enter any local gym and you will see a variety of shapes, sizes, ages, skin colours engaged zealously in the war against inches. DESIGN: IMAAN SHEIKH

It is the ultimate battle. The one that every woman in this region, blessed with the infamous sub continental curves, (that has driven many creatively verbose men to poetry and others to tears), has fought with – her shape!

While some have returned home victoriously, embracing ‘sleeveless-ness’, skinny jeans and all forms of Western attire in all its glory before it was too late, others have taken their last breaths on the venomous treadmill, expressing their desire to enter heaven only if they were re-incarnated as a size zero!

Enter any local gym and you will see a variety of shapes, sizes, ages, skin colours engaged zealously in the war against inches. Gone are the days when ripped muscles and toned abs was strictly a male domain. Gender equality has taken a complete new meaning in the world of health and physical fitness. The most common breed to be found in these ‘fitness sanctuaries’ are:

They are usually found in clusters, idolising Bollywood fashionistas and hoping to return to a size that they never were in the first place! They are usually the proud owners of weight that can only be accumulated through several rounds of childbirth and extended periods of inactivity during early years of marriage. Although their case might sound hopeless, one has to stop, notice and commend their determination at the cause and the lively chatter that they add to the otherwise-sterile ambience.

As you move on, you will also notice the perfect socialite with an already chiselled-to-perfection body. Once you are done cursing her and then God for all the injustices in the world, you then console yourself by mentally fabricating and calculating the number of cosmetic surgeries she ‘must’ have undergone in order to look and weigh like that.

Of course, nobody can look like that naturally! Right. Right, right??

Then of course, there is the quintessential career woman; suffering from the classic superiority phobia that has inevitably earned her a six figure salary, a lonely existence and all the extra pounds gained from the consumption of endless comfort food every night while convincing herself by repeating outdated clichés like ‘happiness is subjective’ and ‘you do not need a man to make you happy’ to herself.

Standing out like a sore thumb in this world of twenty, thirty and forty some-things you will also find that occasional, self-conscious bitter teenager who has recently been surpassed for a thinner, hence hotter female proto-type by a young and very-hormonal love interest. And nothing spells revenge sweeter than hitting the gym and returning to school after two months, having lost a few pounds on the scale but gaining massive pointers on the HDI- Hormonal Desirability Index, far more effective and usual than the Human Development Index!

Lastly, there are the senior-most members of the gym. Although the heart brims with respect and admiration for their persistence and dedication to the noble cause, one cannot help but ignore the feeling of exhaustion and hopelessness that slowly engulfs the heart whenever you see them. They are a painful reminder of the endless nature of this battle – a battle that begins for most women at the onset of puberty and continues till the very end, at times, the end of either those extra inches and of the person itself, at others!

However, what is remarkable in all of this is how women who have absolutely nothing in common, belonging to completely different backgrounds, having experienced completely different lives manage to speak the same language, share each other’s pain and agony, and unite for one cause when it comes to one thing: the battle of shapes!