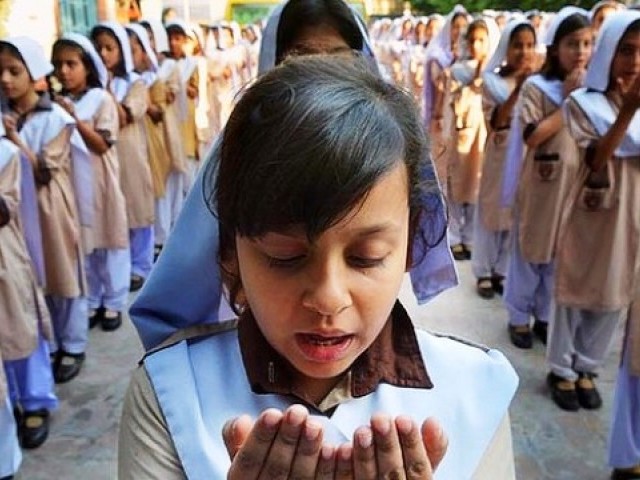 As we invest in our future generation, we find ourselves in the course of a grave challenge. PHOTO: AFP

Malala Yousufzai is an embodiment of the kind of hope and resilience that we have invested in our youth. News of the attempt on her life caught up with us in a sickening wave of realisation that our leniency towards lurking extremist elements has allowed them to poison the essence of who we are as a nation and what we once stood for.

The 14-year-old child took two bullets in broad daylight for taking a stance against the Taliban — a militia that has, over the years, strived to curb female education. While, according to sources, her condition has been stable but critical, the underlying threat to her life remains, as the outlawed Tehreek-e-Taliban Pakistan, responsible for the barbaric act, has asserted that “she will be targeted again” for speaking out against the them and promoting “western culture”.

Even if she survives, considering that she took bullets to such sensitive areas, the head and neck, we will be lucky if she is not paralysed and returns to fully functional capacity.

As we invest in our future generation, we find ourselves in the course of a grave challenge.

Do we want to nurture our children into being brave leaders or do we want to discourage them from speaking out their minds in order to protect them out of fear that such a day may greet them as well?

Beyond the gut-wrenching reality of the horrible incident is the irony that economic frustration and illiteracy are the causes of this kind of brutal violence. We saw it among the youth not too long ago, during the riots against the blasphemous anti-Islam video. Entire avenues were torched and rampaged by mobs of young men disappointed in what their nation has given them as heritage: unemployment, power shortages, class divides and a politically-inflicted hatred for the western world.

Malala has proven through example that change is an individual effort that has the potential to become bigger than one’s own self and that bigotry cannot be countered with violence. We stand by her for protecting the future of education and hope that she continues to inspire us out of our complacency.