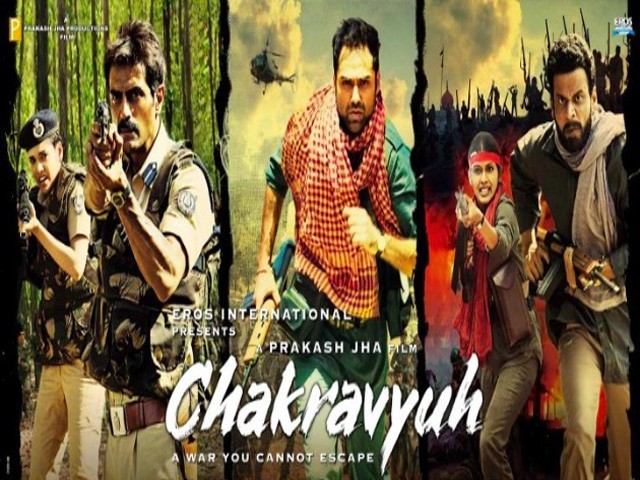 Jha handles the subject extremely maturely and while a lesser director would have relied on playing up one side of the story, Jha steers clear of taking sides. PHOTO: PUBLICITY

Prakash Jha, the acclaimed Bollywood director of films like Rajneeti and Gangaajal had the honour of showcasing his latest offering at the BFI London Film festival underway at the moment. Chakravyuh stars Arjun Rampal and Abhay Deol in the lead roles and is a tale of two friends in the backdrop of the Naxalite uprising in some parts of India.

“I am extremely happy that the London Film Festival wanted to choose a popular Bollywood film for the festival and they decided to choose mine, which is in the popular genre, but is not really a populist Bollywood film,” said Jha.

Chakravyuh is a hard-hitting film. Jha keeps the introduction short and crisp. Adil and Kabir, expertly portrayed by Arjun and Abhay respectively have grown up as best friends. Being a rising star of the Indian police, Adil is transferred to Jharkand, the Naxalite heartland on his own insistence but meets with failure in all his attempts. When Kabir sees this, he decides to help Adil.

What follows is an eye-opener and to be honest, is as true of the Taliban or the Balochi insurgents as it is of the Naxalite uprising in India.

Jha handles the subject extremely maturely and while a lesser director would have relied on playing up one side of the story, Jha steers clear of taking sides. Instead the audience is left thinking and questioning its own ideas of right and wrong. This is where Chakravyuh‘s greatest victory lies – it takes you on a journey and leaves you with the stark realisation that there might just be no black or white answer to the questions that the film raises.

In recent years, Jha has emerged as a one of the strongest directors of modern Indian cinema, with a special panache for putting together an ensemble cast and extracting performances that will surprise the audience. While he never lets one overshadow the other, he offers each character growth and each actor enough space to showcase their best talent.

Both Arjun and Abhay are top notch in their portrayals.

They command the frame but their performances are never overdone, always measured and restrained. Anjali Patil shines in her role as Juhi, one of the Naxalite leaders.

Chakravyuh is a brave film that attempts to take a very serious issue head on. If the reactions it received at its world premiere are anything to go by, we can expect the film to garner widespread critical acclaim and commercial success at the box office when it releases worldwide on October 24.