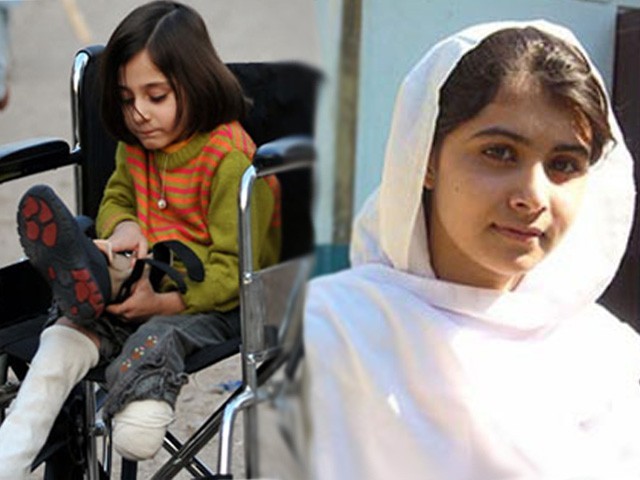 The picture that we’re presented is black-and-white, the debate that we participate in is simply “Either you’re with us or you’re against us”.

“Am I less precious than Malala?” says the caption on the photo.

“Am I less patriotic? Then why don’t you speak out for me?”

The photo shows a rosy-cheeked girl with silky brown hair and a maimed leg, who has been purportedly injured in a drone attack. This is Laiba, the poster girl of the Taliban-sympathisers, propped up in response to the outpouring of grief and sympathy for Malala, who by this time has been consecrated by liberals as a heroine who stood up to the Taliban, the epitome of all hope for girls’ education in Pakistan.

The point that Laiba makes is simple: why mourn one girl shot by the Taliban when you don’t mourn the several injured in drone attacks?

Laiba, in her heart-wrenching deformity, which we feel no child should have to bear, decries the lack of media coverage given to drone attacks, and speaks to a mindset which lays Pakistan’s problems at American doors.

Only, there is no Laiba, the drone attack victim.

The photo, as everyone by this time must know, is a fraud– Laiba was shot at by the Frontier Constabulary, not maimed in a drone attack.

Not that that makes a difference. The idea is to create sympathy for the Taliban by showing this little girl’s face and everyone knows, when moulding opinion in war, the facts matter much less than the associated emotions and ideologies.

And who can illustrate the point better than Malala on whom the future of girls education in Pakistan appears to rest, despite the fact that many of those pinning their hopes on her today barely knew she existed until last week. At one level, it is sickening to see a girl struggling for her life being made into a symbol with over-hyped blogs and over-the-top statements – is it really so hard to make the point against the Taliban with reasoned, rational argument, without recourse to emotion?

Can hope for girls education in Pakistan really rest on one 14-year-old? In this emotionally charged atmosphere it seems blasphemous to ask this question specially since the little girl in question is hospitalised for brain injury, but that is precisely why I do it. Malala has been sanctified – she is too sacred now for us to ask any questions about her. I do not mean to belittle her achievements or ‘sacrifice’, but to highlight how easily emotions are manipulated by the media, particularly when they resonate with already deeply held beliefs. And the problem with such sanctification is that, instead of persuading people to change their opinion on issues, it encourages them to harden the opinion they already hold.

Both these girls are being used as poster childs – one by the pro-Taliban segment, the other by the enlightened lot. Of course, Malala was struggling for a cause she believed in whereas Laiba’s poster is a complete fabrication and she probably has no idea how her picture is being misused. The point that I want to make is that these two are being used to drive an even deeper wedge in an already polarised society.

Sometimes it appears that there are only two types of Pakistanis: the liberals with their humanistic values masking a let-them-eat-cake attitude and expansive but avaricious worldview; and the Islamists with their flawed logic, easily spotted mendacities and their mentality of being always under siege.

But that is reductionist, binary thinking.

The picture that we’re presented is black-and-white, the debate that we participate in is simply “Either you’re with us or you’re against us”. It would appear that if you’re against drones, you’re also against girls education; that if you’re religious then you’re automatically a Taliban sympathizer. Like the Ishq-e-Rasul day last month, the terms of this debate are meant to polarise and create deeper bifurcations, and the religious and humanistic vocabulary associated with them obfuscates the real issues, leading us away from the rational, political questions that we should be asking.

Stories about children who are attacked in times of war – regardless of the side they belong to – are heart-rending. But they do not clinch the argument and should not be allowed to limit the debate.

We need to move away from symbols and toward meaningful dialogue.