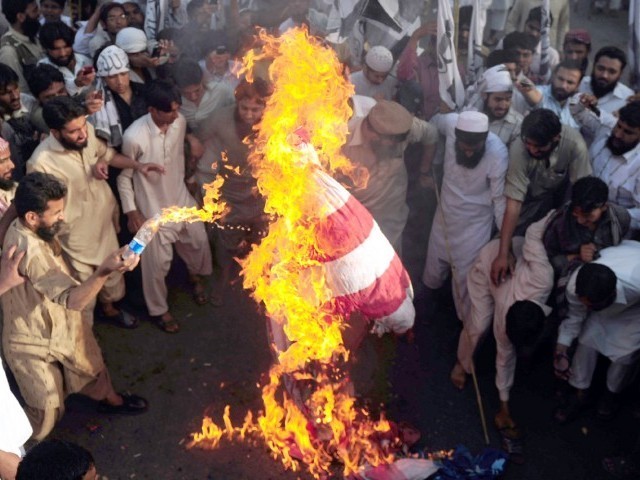 A prominent Pakistani journalist once quipped that conspiracy theories are Pakistan’s only growing industry.

Clearly he’s not familiar with the booming American flag business.

The well-established textile industry is racked with inefficiency, and emerging pharmaceutical and telecommunications sectors remain works in progress. Yet the production of US flags is flourishing.

One prolific producer claimed to churn out as many as 500 flags per hour.

“Our sales are on fire,” another proudly declared.

Yet another boasted of huge profits. The fiery followers of Jamaat-ud-Dawa and Jamaat-e-Islami are particularly eager customers. Though the highly flammable products occasionally have tragic consequences, consumer demand remains insatiable.

“We’re burning through our supplies,” another producer reports, “But demand is white-hot, so we happily keep firing up the production lines.”

Eager to capitalise on this Pakistani success story, the US government has just announced a major new aid initiative to expand American flag production.

“Our critics charge that we have little to show for the millions we invest in Pakistan,” declared a statement released by Washington.

“Our new project—the Partnership to Pulverise Our Image in Pakistan (PPOIP)—is a game-changer. It targets the printers and machinists who comprise Pakistan’s dynamic small and medium enterprise sector, enables us to prominently display the American brand, and produces much-desired high-visibility/high-impact outcomes: large and boisterous crowds, ample media coverage, and lots of smoke and flames. The days of our aid going unnoticed are over.”

PPOIP will provide seed monies for entrepreneurs, small business owners, and others interested in setting up operations across several major Pakistani cities, so long as these operations do not occur within a two-kilometer radius of US diplomatic facilities. 75 per cent of this funding is earmarked for the salaries of US government subcontractors, with an additional 20 per cent allocated to capacity-building efforts that include training seminars with titles such as “Synergistic Solutions: Attaining the Harmonisation of Entrepreneurship, Good Practices, and Flammability”.

Washington acknowledges a key condition attached to this funding: Pakistan must maintain high levels of anti-Americanism.

“In the unlikely event that anti-Americanism rates fall below 80 percent,” the statement notes, “we shall reserve the right not to renew this funding for the next fiscal year. Reductions in anti-American hostility could reduce demand for flag production. Sales of American flags in Pakistan solely for display or celebratory purposes would likely be modest, and therefore the costs of sustaining this aid program could grow prohibitive for the US government.”

Approached at a rally in Lahore, several fired-up flag-bearing participants appeared ambivalent about the American initiative.

“America’s money helps us further this noble cause,” shouted one young man clutching a US flag in one hand and a lighter in the other. “Then again, we don’t want America’s money. But I suppose we’ll take it anyway, unless China or Saudi Arabia makes a better offer.”

Another protester said he was happy to use American dollars to vividly express his desire that America’s presence be expunged from Pakistan.

“Once we remove US influence,” he said, gazing at the smoldering remnants of a burnt flag, “Everything will improve in this country.”

He paused to check an SMS on his smartphone, which announced the latest news: another sectarian attack, the latest corruption scandal, and the release of new figures revealing unprecedented levels of poverty.

“Yes,” he said, “If we could get the US out of here as easily as we can burn these flags, then Pakistan’s problems would instantly disappear in a puff of smoke.”

American officials in Islamabad staunchly defended the new initiative, which was announced during a period of considerable anti-Pakistan sentiment and economic distress back home.

“This is a worthwhile investment,” said a diplomat reached for comment. “Sure, there may be problems. If there are, we’ll just extinguish them. We’re always putting out fires in Pakistan anyway. And if these investments go up in flames, then we’ll just move on to the next $800m project.”

PPOIP represents the latest attempt to revive Washington’s troubled civilian assistance program to Pakistan. Previous examples included a collaborative effort with Islamabad that  deposited an enormous sack of wheat along the Sutlej River for public consumption, a mass pizza delivery scheme, and the use of drones to air-drop humanitarian assistance into Pakistan’s most inaccessible and impoverished regions.

A Pakistani expert in Washington said that PPOIP reflects the shifting dynamics of the US-Pakistan relationship.

“We once spoke of strategic partnership and long-term visions,” she said. “Not anymore. Now we’re more cautious and practical. We’ve toned down our expectations and modified our objectives. We’ve ended the feel-good projects and pulled the plug on Elmo, and are now zeroing in on the essential projects that can truly work. This explains our decision to ignite a sector with arguably the highest growth potential in the country.”