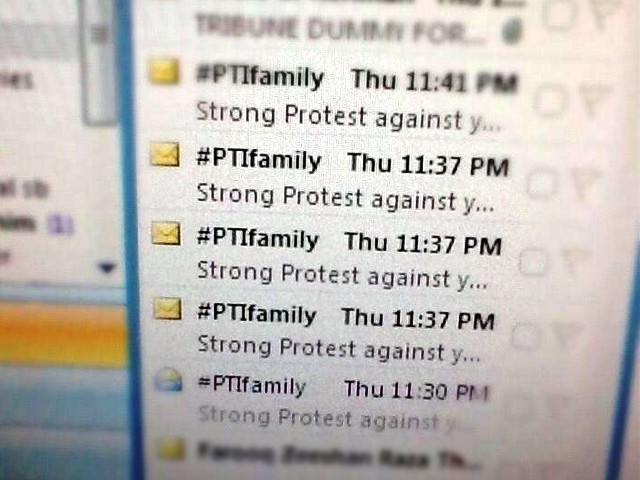 Mouthing off uncontrollably, directing threats to newspapers, and displaying a scathing lack of tolerance, put the PTI in the same league of political outfits the country has lost hope in. PHOTO: SIDRAH MOIZ KHAN

On Thursday, many of us questioned the desirability of ‘democratic rights’ for certain supporters of the Pakistan Tehreek-e-Insaaf (PTI). This happened after the editorial staff at The Express Tribune experienced the most abominable episode of cyber harassment at the hands of frenzied PTI supporters. Email after email clogged up staff inboxes, bearing messages which said that the party will “use its immense popularity to boycott the Tribune website”.

The object of wrath was the story published on October 11, regarding the PTI chief’s sensational statement, in which he claimed that the war in Afghanistan was tantamount to jihad by Islamic militants. Messages poured in saying that in actuality the party chief had said that the Afghan war was ‘perceived’ as Jihad, and that the distortion of his statement was an infringement of ‘journalistic ethics’ by The Express Tribune.

As important notifications dealing with daily work began to get overshadowed by caustic PTI emails, subeditors scurried to access the PTI chief’s statement and discovered, much to their relief, that he had spoken the very words which were quoted in the published news story.

The problem was simple: outrage from supporters made it clear that the statement was contradictory to the party’s stance on the Afghan war. The PTI chief, in all probability, had a slip of tongue which was a perfectly understandable and excusable error. A simple retraction from his side would have done the needful. It is important for angered PTI members to understand that in this world of dynamic news-making, a single news story dealing with a leader’s ‘statements’ can do nothing to make or break his career. Or make him/her lose or win a consequential number of votes for that matter.

Statements are made every other day, newspapers are published daily, and websites are updated on a minute-by-minute basis – all of which are readily and regularly accessed by people who are part of the vote bank. Hence, it doesn’t take much effort to undo any sort of backwash, especially one dealing with a politician’s statements, which few like to take seriously anyway.

The burning question is that if a copy of the PTI chief’s original statement was available in the newsroom, along with a video posted on the Tribune’s website, how could it not have been accessed by PTI members?

Besides, had there actually been an inaccuracy of such a nature, a clarification would have been speedily drafted and published prominently – a practice which The Express Tribune does regularly and takes pride in doing, quite unlike other national papers which steer clear from them.

In a distasteful coincidence, an Urdu op-ed in the Daily Jang by Ata-ul-Haq Qasmi, published on October 11, related an account of similar cyber atrocities by PTI supporters. The author lamented the fact that PTI workers had made excessive use of profanities, coupled with threats, while criticising his views in an earlier op-ed which ran counter to the party’s.

Whether the PTI is a ‘good’ or ‘bad’ party is not being discussed here. For all most of us know, the PTI is a party which is a beacon of hope for many and one that is ardently supported by some very intellectually sound people. It also enjoys a good following from the middle class youth, who have nothing but Pakistan’s best interests at heart. However, thoughtless displays of ire, mouthing off uncontrollably, directing threats to newspapers, and displaying a scathing lack of tolerance, put the PTI in the same league of political outfits the country has lost hope in.