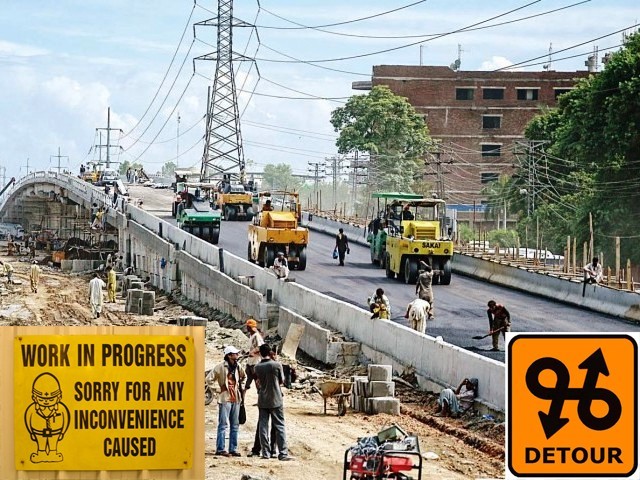 The bearers of this brunt have been the residents and commuters with much time wasted in traffic jams and as much spent facing difficulty and stress on a daily basis.

Residents of Rawalpindi have continuously been facing traffic problems primarily due to deteriorating state of roads in urban areas.

Massive traffic jams occur at peak hours on Benazir Bhutto Road, Mall Road and Saidpur Road. The government finds little sense in constructing flyovers on different intersections of Benazir Bhutto Road. This is in spite of the fact that the smooth flow of traffic at the main artery of the city is severely hampered.

The long-term and feasible solution to traffic in the garrison city lies in adding new roads to the existing infrastructure rather than solely focusing on Benazir Bhutto Road. The recently-begun flyover at the intersection of Sixth Road, Benazir Bhutto Road and Chandni Chowk will, no doubt, help in uninterrupted flow of the traffic. However, after the completion of the flyover on Sixth Road, unmanageable congestion will be seen at the double road intersection near Nawaz Sharif Park.

The Punjab government has also started widening the Mall Road at Chorr Chowk near Westridge and at Pirwadhai Morr, but no efforts are being made to add a new road to the existing structure to ease pressure on the two main roads.

A project with the name of Ring Road was first visualised in 1996 and a road was to be constructed from Rawat to Tarnol to ease the flow of heavy traffic to and from different parts of Khyber-Pakhtunkhwa. The project never materialised mainly owing to rising costs and declining funds.

At the moment, the project is estimated to cost over Rs25 billion.

Another project was the Leh Expressway Project starting from New Katarian near Islamabad and ending near the Rawalpindi bench of the Lahore High Court alongside the Nullah Leh. The project, when announced in 2007, was to cost Rs17 billion but now the cost has soared to Rs23 billion.

However, the main reason behind the failure of these projects was political rivalry. If the project was announced by one government, its opponents, when in power, would refuse to go for the idea. The bearers of this brunt have been the residents and commuters with much time wasted in traffic jams and as much spent facing difficulty and stress on a daily basis.

A reporter for The Express Tribune based in Rawalpindi.