Doomed to a life of drones 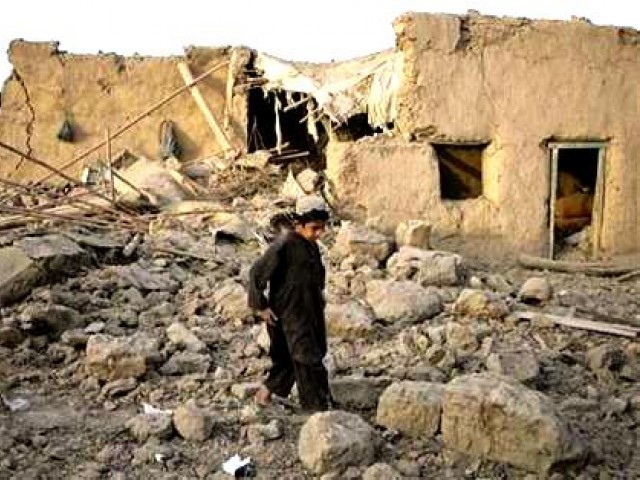 Suddenly, a predator flying in the air threw fire in the direction of his house. PHOTO: REUTERS

Shattering sounds of broken glass and screams of sirens poured into Ali’s ears; and hot, blazing flames leaped before his eyes; he could not say with assurance whether that was an hallucination or some frightening reality.

A little while ago, he had been plucking yellow, juicy apricots from a tree in his courtyard. Suddenly, a predator flying in the air threw fire in the direction of his house.

Those sounds came back to him and were mingled with low, moaning human sounds. Ali shut his eyes tightly and attempted to move his body. A loud groan escaped his mouth. Hearing his pain, a lanky man rushed towards his bed. He bent down over Ali and touched his forehead.

Ali blinked his eyes but was unable to utter a single syllable.

Putting a thermometer in his mouth, that man inspected his bandaged legs and said slowly:

“God has kept you alive. Only your legs were hurt.”

Ali wanted to ask him about his legs but words emerging from his throat were stuck on his palate and only gurgling sounds could be heard.

The lanky man had moved to another bed. The boy noticed other people in the room. A little boy with with blood-stained bandages lay on a bed next to him. There was also an old man in the room – I could only see his torso.

Were these real people or mere phantoms? Ali could not make out the difference. A life-force was pushing him towards light and a supernal force was dragging him towards darkness. The boy sensed a coarse touch on his face. That old man was bending over him. Deep lines criss-crossed his forehead and his cheeks were sunken in. His caresses were rough, but they were reviving him as rain drops replenish the dead, parched earth.

“Where were you?” asked the old man.

“Where am I now?” mumbled Ali.

“In a hospital at Mir Ali.”

“I was in the courtyard when the plane which hovers in the sky twenty four hours a day, spit out a hellish fire.”

“And where is my family? My father, mother, two little brothers and a sister…,” said Ali.

“Rescuers only found you breathing.”

Deep shudders gripped Ali’s torn body. The old man clasped the boy’s shivering body in his bony arms. After passage of sometime that seemed like an eternity, old man released him from his grasp and sat on the stool.

“I had a tall, fair son like you. He had studied at Razmak Cadet School. We were going to a graveyard to bury a relative. His car was hit by a missile. I found his body parts scattered all over the road,” stated the old man. “Everyone says that we are ferocious! We are independent-minded! Never believe these words. We do not control our destiny. The ridges illuminated by moonlight, the echoes of birds chirping in the valleys, and the noises of the boulders falling in the deep ravines are no longer ours,” said the old man.

“Why aren’t we independent?”, Ali asked.

“My village is nearby, Mir Ali. When the Afghan war began, the government needed our help to fight with forces on the other side of the border. Money poured in to recruit agents. Roads and bridges were built to connect impassable areas. Electricity lines were installed to buy loyalty of people. Our houses were filled with smuggled goods: blankets, TVs, and fridges.”

Deep-throated sounds of pain, emitted by a boy, broke their conversation. After a few moments, the old man continued:

“Ah… this modernity was a sham. It transformed our society but in a negative way. Few became rich and a criminal economy was created. No schools were built to educate our kids and no factories were constructed to employ our young men, so they remained engaged in the business of arms making and smuggling ─ both of goods and drugs.”

“Who brought predators into our land?” asked Ali while looking at the boy with his bandaged head.

“War in our land is as treacherous as are passes in our mountains. As the moon goes through many phases, so this war has passed through many transformations. Predators came into our skies when a bigger power began fighting with certain malevolent elements in our land. But these predators can’t distinguish between us and them, between our schools and their hideouts and between our houses and their bunkers,” said the old man.

“How will war end in our country?” asked Ali.

“By healing the wounded like you; by telling kids like you to fight for your rights; by cleaning our land of mischievous elements that have turned us into rogues. My son, believe me when I tell you that we have been fighters for a long long time, but not rogues. We could distinguish between goodness and evil, between light and darkness. Now, my dear son, we need that will and judgement again. We must rise from the ashes.”