PTI’s Peace March: Give credit where it is due 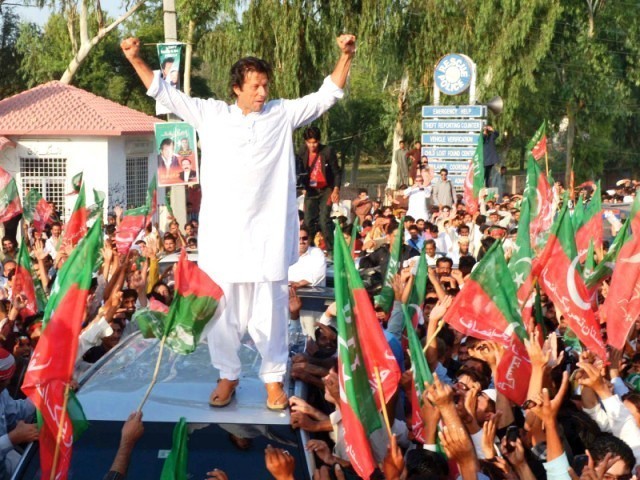 PTI has managed to bring together people of FATA with the common people of Pakistan. This is a monumental achievement which will benefit the country and its citizens in the long run. PHOTO: AFP

Waziristan, a centre point for drone attacks by US-led NATO forces, is a place from where thousands of residents were misplaced internally and had to lodge their families to safer places of Pakistan.

Waziristan, a place that is forgotten even by its own rulers.

Recently, Imran Khan, Chairman Tehreek e Insaaf, led a ‘Peace March’ to South Waziristan along with the citizens of Pakistan, local media, his own party workers, and above all, foreign journalists and anti-war activists from the West.

This march started from Islamabad on Saturday October 6, 2012. The motorcade drove across Talagang, Chakwal, Kundian, Mianwali, Karak, Dera Ismail Khan and finally entered Waziristan, crossing Northern Punjab, Central and South Punjab from where it entered into the borders of Waziristan on Sunday October 7, 2012.

With hurdles created by the administration to slow down or at some point, even to stop this march moving forward, Imran Khan’s determination kept the rally moving forward where it finally stopped to move beyond Tank.

PTI’s Chief Coordinator, DI Khan Malik Abdul Qayyum Khan, criticised the government for blocking the routes towards Waziristan, creating further hurdles for the peace rally. He asserted that the government wanted to discourage people from Wana to join the march. There has been a lot of criticism regarding this Peace March by prominent parties of status.

Many notable politicians, including JUI-F Chief Maulana Fazlur Rehman, have accused Khan of being ‘delusional’ or a ‘political point scorer’ or a ‘Taliban Khan’ or even ‘an agent of the West’. Khan accused the JUI-F chief of having a strong hand in circulating an adverse perception against PTI saying,

“Fazlur Rehman is a charlatan who is spreading the wrong idea amongst people by labelling us as the agents of Christians and Jews; as we are just trying to promote peace within the region”

“Everyone has seen that the PTI’s rally to Waziristan was a failure, similarly people would also disregard the PTI in the upcoming election.”

He said that Imran Khan was making a fool of the people of this country. Even President Asif Ali Zardari jumped onto the bandwagon stating that whenever there was any crisis situation in the country, Imran Khan was outside the country.

Local journalists and anchors condemned Imran Khan asking why he had not taken his march to North Waziristan which had been affected the most by drones. Khan, concerned about the many civilians he was travelling with was weary as a place like that would be dangerous for them to go to. If anyone were to get hurt, the blame would have been placed squarely on Khan’s shoulders and could have been disastrous for the PTI as well. In line of precaution, Khan took maximum measures not to expose foreign media, his own party workers and the local people to any mishap.

One wonders, what kept these critics from visiting the people of Waziristan themselves these past five years?

Why couldn’t they have tried scoring the same political points? Who is to blame today?

Is it Imran Khan who started his dharnas (sit-ins) against NATO and drones many years back or those people who never moved a muscle to show solidarity with the people from whom all they really want is votes?

Why hasn’t any other party done this?

A place where even the local media was not allowed to enter previously is now there, on the ground taking interviews from the common people of that area.

What is remarkable is no one in that area knows the name of the prime minister of Pakistan! Raja sahib they are your people, don’t you think you should be known to them? Own your people Sir, why have you alienated them?

One needs to understand that the people of the Federally Administered Tribal Areas (Fata) are facing problems from three sides.

1) The attacks from the US-led Nato drones

2) They have to face the Pakistan Army whom they take as foreigners in their very conservative society; the army pickets affect the local people more since their women and children are thoroughly searched whenever they move around.

3) Like in Swat, the Taliban demand money from the local people, or their daughters in marriage or their sons to join their fight, a similar situation which was exposed in Swat.

The Taliban forcefully seek hideouts in the local populations which eventually expose civilians to the drones and the army. This has resulted in their children missing schools, their businesses lost and their agriculture being damaged.

PTI has managed to bring together people of Fata with the common people of Pakistan. This is a monumental achievement which will benefit the country and its citizens in the long run.

Creating the lost jazba or zeal is vital at this moment for our nation. Like it or not, PTI has managed to highlight the menace of drones that have managed to kill innocent people, maimed thousands and displaced hundreds of thousands. Whether drone strikes are stopped or not that is another story, but what Imran Khan and PTI have achieved is that they have shown solidarity to a people, an area which had been completely forgotten by its own countrymen.

PTI today is the only party that has provided a shoulder for the people of Fata, a shoulder they had been looking for since the past five years.

A poet, bilingual columnist and an author. She started her literary journey at the age of ten. She works as a freelancer with several newspapers/dailies/news desks.