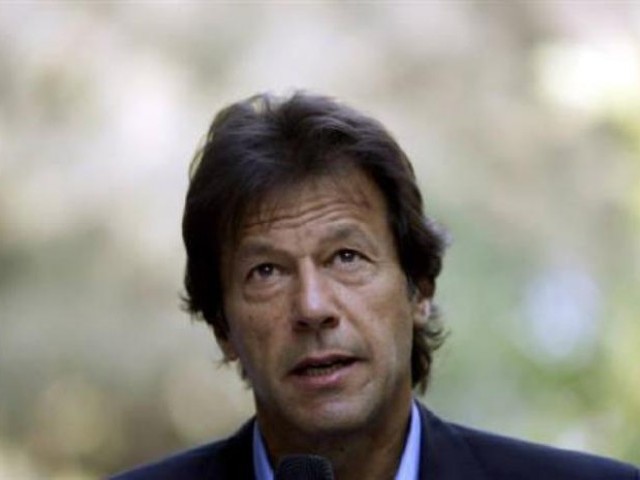 Imran will be giving our enemies exactly what they have been trying to acquire for years; some sort of mainstream political endorsement. PHOTO: REUTERS

Imran Khan is guilty of one of two things. He is either guilty of deliberately and knowingly legitimising the Pakistani Taliban as a political force for what he perceives to be his own populist gain, or he is guilty of colossal naivety and unintelligibility.

Personally, I am far more worried by the latter, and also far more convinced of its plausibility.

Allow me to explain.

Let’s consider the possibility that Imran Khan is indeed playing to what he understands the populist tune to be and that his soft, apologetic stance towards the Pakistani Taliban is a deliberate ploy fueled out of a mixture of two fears; one fear being of his own life and the other being of antagonising his Pashtun support base.

This is not implausible.

It would not make sense for Imran Khan to be making new enemies with elections and his first real chance of being a major part of a coalition fast approaching. This would also allow him the liberty of being able to take a harsher stance towards the Pakistani Taliban once he is actually part of a government and has less, not everything, to lose.

This is what most die-hard PTI supporters will tell you when you exasperatedly ask them what on earth their dear leader is up to. They will tell you with the utmost conviction, that this is all part of an elaborate master plan that will only become apparent when Imran Khan wants it too.

They will tell you, with straight faces, that this is the same master plan that includes Imran Khan’s mysterious ‘team’ of young and brilliant public administrators that can and will only be announced when the ‘time is right’ because , you know, the system would corrupt them otherwise.

Here’s what I think is actually the case. I think that Imran Khan has conflated a number of distinct entities and problems and has ended up thoroughly confusing himself and everyone else as a consequence.

First of all, I believe that Imran Khan doesn’t really actually know very much about the Pakistani Taliban or their, short but colourful, history, profile and goals.

I believe, and fear, that Imran Khan’s conception of the Pakistani Taliban is clouded by his notion and understanding of the Afghan Taliban, and that he hardly takes the trouble to distinguish between the two. I think he has accidentally conflated the issue of drones and the Pakistani Taliban, not realising that opposing drone strikes and endorsing the legitimacy of the group responsible for 30,000 civilian and 4000 Pakistani military deaths is two very different things.

I think Imran Khan truly believes that the Pakistani Taliban have a legitimate cause and that they are people with whom negotiation, dialogue and compromise is a possibility.

Worst of all, I think Imran Khan still has not accepted, and refuses to accept, the fact that regardless of how and why it came to be, this is very much Pakistan’s war now.

Imran has often been, somewhat, jokingly referred to as Taliban Khan for his apologist tendencies, which up till now I have always thought to be a bit unfair. Yet this entire affair of even considering the possibility of relying on the Taliban for security during a political rally is akin to crossing the dangerous line between innocent flirting and unforgivable advance. This is a deplorable and dangerous policy, for if Imran continues to engage and endorse the Pakistani Taliban, it will have the unintended consequence of granting unwanted legitimacy to whatever nutty, far out cause they claim to have.

Imran will be giving our enemies exactly what they have been trying to acquire for years; some sort of mainstream political endorsement.

This transforms them from a purely militant organisation to a political entity and recognised ideology. You can stamp out militants but not ideologies Captaan sab, please remember this. If you strengthen, albeit accidentally, the position of our enemy then the blood spilled as a result will be on your hands as well.

An analysis, of the recent methods of the Pakistani Taliban, indicates an increasing want of political legitimacy and recognition. This is both a sign of strategic maturity and overall weakness. When the Pakistani Taliban was at its peak in 2009 there were attacks on civilians almost every day in major cities. Then Operation Rah-e-Raast was conducted and the Pakistan Army literally killed a thousand Taliban fighters in a matter of days and with them losing much of their top leadership.

Since then heavy amounts of military operations have been underway in South Waziristan and the Pakistani Taliban is decidedly on a back foot, now in a position of relative strength in only North Waziristan. This back foot has dictated a huge reduction in the targeting of civilians and a large increase in the targeting of military individuals and installations. This deliberate sparing of civilians is designed to lure people into a false sense of security, not unlike we did to them in Swat, as if to say that our war is only with your army and not you. This is a classical psychological guerrilla tactic; it causes people to question the role, right and moral position of our armed forces, whom have been valiantly defending the country from the Taliban menace for years now.

In such situations, it is the responsibility of the political leaders of the nation to stand firmly behind their armed forces, building a war narrative, outlawing and delegitimising the enemy, not agreeing to be protected by them. It is the responsibility of our leaders to take ownership of the war, not take the cowards way out by continuing to call it America’s war on terror despite it being quite apparent that the Pakistani Taliban’s war is with us and not with the Americans.

That would be the Afghan Taliban, an older, more mature and politically mature group that has focused goals and is ready to make political concessions. The Pakistani Taliban is nothing more than a group of well trained, naturally warlike criminals and brigands that have delusions of grandeur; of imposing their own draconic interpretation of Islam on a nation of 160 million people.

With a penchant for beheadings and blowing up schools, funded by foreign powers, and comprising of a large percentage of foreign fighters, the Pakistani Taliban is the most backward, savage, cruel and downright despicable group of fighters in the world today. They are dangerous because they are young, determined and well disciplined. The average age of a Pakistani Taliban commander is between 30-35 years, making their rank and file extremely young and immature, prone to the deliverance of absolute savagery and cruelty in the name of Islam. The Pakistani Taliban is our enemy, and he is an enemy we should fear for two reasons, the first being that he is a formidable enemy and the second being that it is only out of fear that Pakistani’s have ever stood united. We must oppose them with all the moral righteousness that they oppose us with. We must fight fire with fire and not cease until ultimate victory is not achieved.

In short, we must clear North Waziristan once and for all, come what may, no matter the sacrifice. It will not be easy, and there will be heavy losses, yet if there was ever an army capable of such a task it is the Pakistan Army.

The, very good, reason that the Pakistan Army does not launch an operation in North Waziristan is precisely because of people like Imran Khan. Public opinion shapers just don’t get the fact that the army is almost powerless without them, or maybe they do, and that is the problem. Unless the civilian government and major public opinion shapers do not stand firmly behind the army in a unanimous and unwavering vow of commitment to the defeat of the Pakistani Taliban, it is not viable.

The moment the operation is launched there will be a backlash in major cities.

Soft targets such as malls, markets, cinemas and public gatherings will be relentlessly attacked by suicide bombers. Support for the war, hardly existent to begin with, will quickly dwindle, with the Najam Sethi’s and Asma Jehangir’s of our society jumping on the opportunity to ridicule, criticise and antagonise our military using the irresponsible media to their full advantage. There will be anarchy like never before in Pakistan, the economy will further plummet, violence will skyrocket and effective public administration, what we need more than anything, will be the least of anyone’s worries.

The Americans, who have been waiting for an excuse, will finally conclude that Pakistan cannot in fact guarantee the safety of its nuclear arsenal and will use the unrest to justify launching special operations to relieve us of our nuclear capabilities. The Army will stand routed amidst the storm of chaos that will begin to rain down and it will have all been for nothing.

Thus the choice lies with us.

Accept this bunch of crazies as a legitimate entity within our country, as Imran Khan seems to be doing, or rid our home of this evil once and for all. The power to fight our enemy lies with us, and begins with our recognition of a common enemy and the need to defeat him.

As always the right choice is the hard choice, but it’s one we must all make, pronto. For in indecision lies only more of the same.