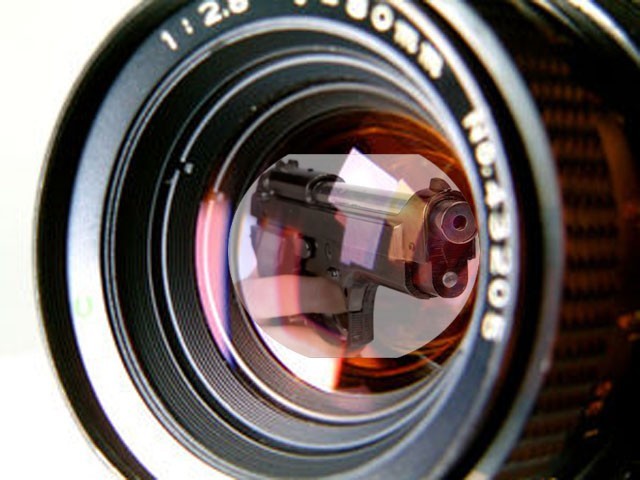 What if my camera was pointed at the man with the gun? He was annoyed as it was and had to let his anger out at someone.DESIGN: ERUM SHAIKH

Nothing is more dangerous than a mob that gets carried away by religious fervour and frustration. It can be equally threatening to report about such a mob as a journalist.

On September 21, the day the whole country shut down to condemn an anti-Islam video, there were mad men out on the streets bent upon destroying public and private property. They seemed to be having fun — raising slogans and cursing the US.

For a reporter, it is easy to be swept away by the sheer energy displayed by boys wielding sticks and bricks. Karachi offers a lot of action in this regard these days and all reporters want to be in the middle of it. When tear gas shells are fired and the air resonates with aerial gunfire, a reporter runs along with the crowd. Just like the young demonstrators, he rubs salt on his face and eyelids to lessen the impact of the teargas.

That is not an ideal situation.

Journalists are told to stay behind the police. But more often than not, they end up being in the middle of the protesting mob.

That fateful day, thousands of men were trying to reach the US consulate. The situation turned ugly near the Native Jetty Bridge in the afternoon when determined policemen fought back. Every now and then, someone from the crowd would fire a shot in the air.

I found that the fury of the protesters can easily turn against the journalists, too, especially if they are taking photographs. As I took a photograph of a man busy breaking a CCTV camera, three men on a motorbike intercepted me and starting cursing. They complained that I had not gone near the barricade from where the police had fired tear gas, focusing instead on the man breaking the camera.

Of course, I couldn’t go near the barricade.

At times like these, you do whatever you can to save yourself from being thrashed and looted. So I used two other men whom I had befriended and had promised coverage to get me out of there.

Later that night, when the streets were empty, all sorts of images came to my mind.

What if my camera was pointed at the man with the gun?

He was annoyed as it was and had to let his anger out at someone.