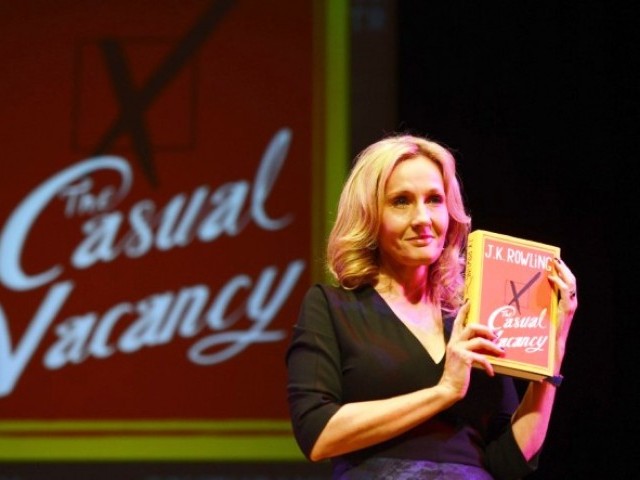 In the end, it is a tragedy; a tragedy that leaves you thinking about the flaws in human nature and the direction in which our society is headed. PHOTO: REUTERS

JK Rowling has done it again. Her new novel The Casual Vacancy is a magnificently written piece of literature and one, which will be hotly debated in the coming months. Its language is salacious, its prose is incisive and its delivery is forceful. By writing The Casual Vacancy, JK Rowling has made it clear that her range is not limited to writing fantasy novels only.

The Casual Vacancy is the story of a little, apparently peaceful, English village of Pagford, whose façade of calm and serenity actually conceals an ongoing war between its inhabitants. The novel begins with the death of Barry Fairbrother who is the local councillor from Pagford. Fairbrother is a champion of the under-represented and the disadvantaged inhabitants of The Fields, the nearby council estate, whose very existence is a thorn in the eyes of the well-to-do Pagfordians. Barry Fairbrother has a tendency to see good in every one and he sees good combined with talent in a young bold and aggressive girl from the Winterdown School named Krystal Weedon and her classmate, a bullied dyslexic girl of Indian parentage, Sukhwinder Jawanda.

He motivates them to stun other schools by winning the rowing championship. However, any hopes of these girls making it big into society vanish with the death of Barry Fairbrother. Upon his death, the old guard of Pagford lead by the Mollison family want to cut the Fields adrift from the council because it’s a drug and crime infested place and a threat to the well to do and superficially peaceful life style of Pagford. They also want to close down the drug addiction prevention institution named Bellchapel Clinic, which they think, is eating up precious government funds by producing no noticeable results in its patients -most of whom are the residents of The Fields. They can only succeed in achieving their objective by getting their candidate elected for the seat left empty by Barry Fairbrother and thus a Casual Vacancy is opened.

Sadly though, with Barry’s death, the purposefulness in the lives of Krystal Weedon and Sukhwinder Jawanda is gone.

Soon, the ill-disguised racism, alleged child molestation, personal vendettas, corruption, whistle blowing and petty personal grudges push this election into the backdrop and bring forth the simmering hatred in the inhabitants of Pagford for each other. Teenagers are at war with their parents, neighbours at war with each other, white English folk at war with the brown-skinned immigrants and affluent people at war with the poor.

Thus, in this novel, JK Rowling launches into a no holds barred, bold, incisive and brutal attack on the privileged classes who think that they are cut above the rest. The comedy in this novel is black as coal, the language is industrial and the wit is sharp as a Samurai’s sword. Anguish is etched in plain black letters across the novel and the depiction of human misery is authentic. It has a Dickensian feel to it in the way it shows the harsh reality of life in the recession hit Britain. JK Rowling highlights the gaping holes in the fabric of society, which definitely need to be stitched up.

In the end, it is a tragedy; a tragedy that leaves you thinking about the flaws in human nature and the direction in which our society is headed. It truly makes you shiver. Just like in Harry Potter books, death plays a key role in the novel but unlike the Harry Potter books, this one doesn’t only just deal with the death of characters but also the death of dreams of the disadvantaged and the aspiring.

While many critics say that this book bears stark similarities to the Harry Potter books, I would tend to partially agree with their statement because just like in the Harry Potter books she weaves a story of class and race struggle, which though was disguised with spells, enchantments and potions, but in this novel, sans magic, brings to fore her leftist leanings and something which we might see more of in her future works.

Moreover, like all JK Rowling novels, this novel beautifully teaches one the importance of seeing good in everything. It puts forth a message of human compassion and believing in oneself.  If you come out of this novel, having learnt those lessons then JK Rowling will have achieved her objective.

I rate this novel  with 4.5 stars, cutting 0.5 for some boring bits in the beginning. Otherwise, highly recommended.