The day I met a mother of thalassemia inflicted children 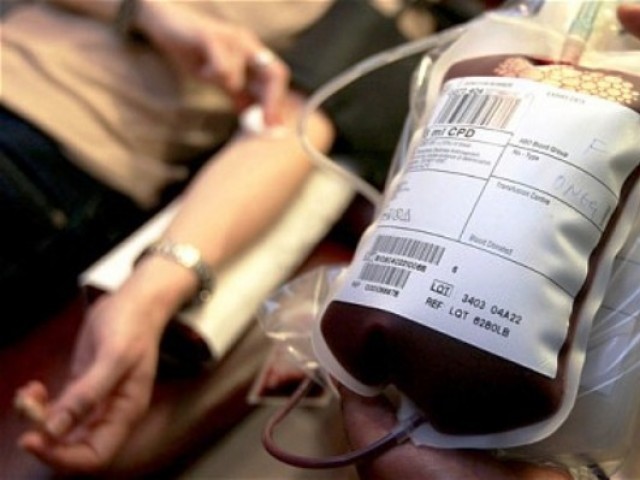 if you one of those who desperately wants to bring something positive to this world, donate some blood. You could save a life! PHOTO: REUTERS

It was a usual summer day in Peshawar, back in 2004, when I left my hostel to attend a lecture which was scheduled for the afternoon. The university was at walking distance, so keeping my notebook above my head to protect myself from the sun, I made my way there.

I was about to enter the university, when I noticed a woman trying desperately to convince the security guard to allow her onto the university premises, whilst repeatedly wiping sweat off her brow with the corner of her clean, stark white chaadar.

She seemed like she belonged to a decent family, wrapped in her broad chaadar, typical to the parda traditions in the region.

Two lovely children dressed and groomed neatly for the day, apparently the same age as each other, were accompanying her. She was confident and started speaking immediately when I asked her,

(Is everything alright, sister?)

“I have come from Mardan, brother! Both of my kids are suffering from thalassemia. I bring them here twice a month for a blood transfusion. The blood transfusion centre always asks for donors, as they just can’t give away blood without having blood in return” said the tormented mother.

“I normally go to Peshawar University’s campus looking for donors. The students are very generous and I never return empty-handed. Now the campus is closed for vacations. Since I couldn’t find anyone there, I came to this university. I have already asked a couple of students here but they seem to be afraid of donating blood. Will you be able to help me or find me someone who can donate blood for my children? I will pay for their conveyance to the blood transfusion centre and back to the university.”

Perhaps, fearing that I may take her as a sophisticated beggar who concocts clever stories to bag money she went on with the monologue, including the exact amount she would pay to cover the cab expenses.

I could clearly see that the blood transfusion worried her and the anxiety in her eyes revealed how desperately she required a donor. Never in my life have I felt that my worries are so meagre as compared to the ones others have to suffer. Imagine to have to beg people to donate blood every two weeks! Only a mother would ever do that for her children.

I realised then, that donating blood was the least I could do to help this woman who had her fair share of worries in life. Thus, I waved to a cab passing by and asked the woman to get in. We headed straight towards the transfusion centre which was not too far from the university and started to have a conversation.

“Their father was a good man, a professor at the Postgraduate College Mardan. He used to take good care of them” she said.

“So why he didn’t come with you today?” I asked.

“He died last year in a car accident”, she said with practised control.

I felt a wave of sympathy towards her, but realised that she never ask for any – all she needed was blood for her children.

The transfusion went on successfully. I could the children’s faces glowing and it felt immensely satisfying to know that I had the ability to help just like that. Her children would now be safe for at least two more weeks, just because of the blood I had donated. The woman bought me some juice, which, she thought, would give me an energy boost. On the verge of refusing the offer in order to prevent her from spending money, I quickly changed my mind and politely accepted her kind gesture. It would be unkind for me not to have accepted the offer from such a brave lady; a strong lady in no need for sympathy.

On the way back, I felt completely healthy. The quantity of blood that had left my body was not enough to make me shiver and fall. You don’t die when you donate blood; rather your body produces the same quantity of blood within a few days, that too, fresh blood. Blood donation isn’t something one should ever be afraid of.

Approximately 6,000 children are born with thalassemia each year. On this day, all I ask of you is to feel the pain and suffering of the parents of these children. Change is a long and slow process and if you one of those who desperately wants to bring something positive to this world, donate some blood. You could save a life!

A Business Processes and Business Analysis Consultant who studied MS Data and Knowledge Engineering at the University of Magdeburg, Germany. He is originally from Orakzai Agency, FATA, Pakistan