Political aims of the public: Know your civic responsibilities first 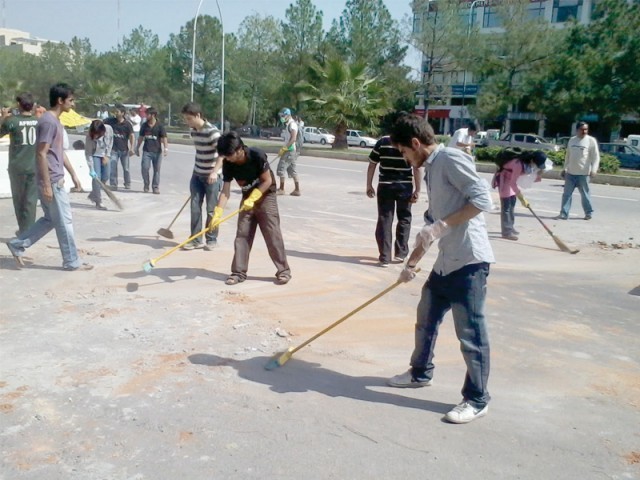 In our cultural context, ‘Project Clean Up for Peace’ displayed the true political spirit of the civil society. PHOTO: MUHAMMAD JAVED/EXPRESS

For most of us, politics is a dirty game of false promises on the part of the leadership. It is used to routinely obscure laws that protect the corrupt and shows the extreme ignorance of politicians.

Henceforth, and sadly enough, ‘us’ as a nation and ‘we’ the public, limit our ‘political’ responsibility to casting a vote and critically examining events for the next five (or ten) years, depending on who ascends the executive throne.

On the other hand, some of us are scornful at the very idea of the dirty game that is politics, without realising that everything, in fact, is political.

Civil society is an archaic term. It’s part of the jargon that only very staunch political scientists use. In a nutshell, it categorises that leg of the society which is outside the influence of the government.

In our cultural context, ‘Project Cleanup for Peace’ displayed the true political spirit of the civil society. It demonstrated its corrective mechanism by students taking to the streets in three major urban centres, to clean up the debris of a government-sanctioned day of riots.

Moreover, in a time where we lack unions that register organised protests, this project demonstrated the political agency of the youth; where micro-blogging was the instrument of communication and broomsticks were the weapon of choice.

Hence, something ‘political’ does not just restrict itself to a party, a leader, a vote bank and a polling station. It is not constrained to policies that the legislature drafts or the executive implements. As soon as we identify ourselves as citizens of a nation state we become politicised entities.

Therefore, it is high time that we develop a sense of civic responsibility and work as the corrective mechanism that forms the very essence of our ‘civilian being’; and with that it is time that we leave behind our narrow (misconception) of politics and discover its advantageous nature which is embedded in ‘we’ the public.

A sub-editor at The Express Tribune, Zehra tweets as @ZehraHusain twitter.com/ZehraHusain

This is not a political piece, it is the politics of everything