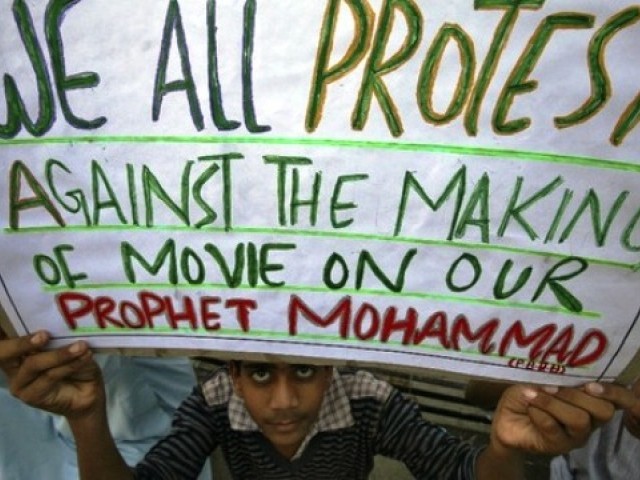 Calling a strike over some sick person’s depiction of Islam is one thing, but why do we have to go to the extent that would only make us look bad? PHOTO: REUTERS

Last week’s attack at the diplomatic enclave in Islamabad over the US-made anti-Islam video brought back the memories of disappointment. It took me back to my Karachi University (KU) days in 2005, to the cartoon controversy and the frenzy it generated among Muslims.

Students would come to classes only to be sent back home, while other students joined the cause and protest. Of course, KU protests were not as violent as the ones in Islamabad, but the intensity was the same.

While it was evident that the protesters were hurt, I failed to understand why they further hurt themselves. We lost an entire week of classes.

Calling a strike, shutting businesses over some sick person’s depiction of Islam or the Holy Prophet (pbuh) is one thing, but why do we have to go to the extent that would only make us look bad?

In case of the video, too, when most of the conversations and television shows have nothing better but to ponder, I still find myself in an uncomfortable position of not feeling anything about the issue. I haven’t seen the video, nor have I tried to Google the content of the video that provoked the Muslims around the world.

My conscience really does not allow me to, because my faith is strong enough and I can sense that something as trivial as a video can’t make one feel small or violated or victimised. Therefore, it should not even have the kind of effect it had on the Muslim community.

But even if one chooses to raise his or her voice or condemn a foolish video, mainly because it is disrespectfulness to mock or belittle a faith, one must think where it is coming from. We forget that we are protesting against people who don’t even respect their own religion, hence the disrespect towards other religions.

The protests are redundant and they are just another way to provoke Muslims around the world.

Thus, my question is; why fall into that trap?

Even as a Muslim by heart, my natural response to the video or to the cartoons was that I was indifferent to any of them, because faith is about peace and tolerance and simplifying things in life, not about protests.