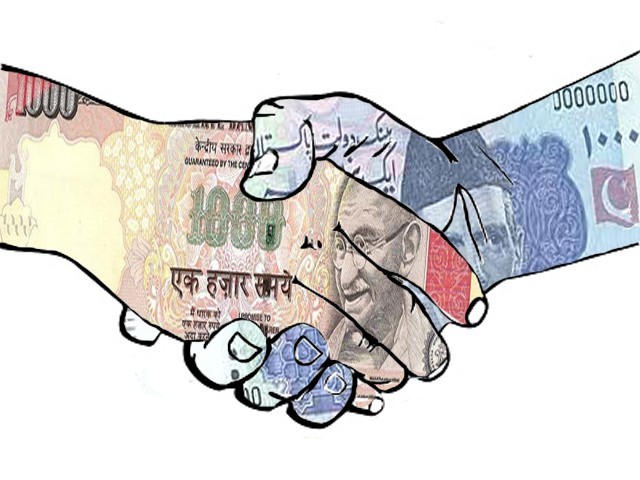 Some critics hope that trade with India may dispel the impression that Pakistan is a land of fear ruled by the Taliban. DESIGN: ERUM SHAIKH

Pakistan and India have shared decades of a love-hate relationship under different regimes. The present government is leaning more towards love than hate and took the bold decision of granting most favoured nation (MFN) status to India, in order to open up trade between the two countries.

Some critics hope that trade with India may dispel the impression that Pakistan is a land of fear ruled by the Taliban. The question is whether an enhanced trade relationship between the two countries will bring these two rivals closer.

In recent talks held in Islamabad, India offered to set up a 2,000MW power plant in Pakistan, in addition to exporting 500MW of electricity to overcome the energy crisis. India also offered to provide 100 locomotives to Pakistan and agreed to provide a level playing field to Pakistani exporters by bringing down its sensitive list, maintained under the South Asian Free Trade Agreement by 30%.

Pakistan assured it would significantly expand its list of the goods to be traded through the Wagah border by the end of October. Both countries also decided to open the Wagah route for seven days a week instead of the current six-day operation.

While some fear that India will gobble up the small economy of Pakistan under the liberal regime of trade, they forget that Pakistani exporters will have a larger market in India to trade goods. This is good for liberals of both countries who want a closer relationship by burying rivalries of the past.

However, extremists in Pakistan and India have their role in framing relations between the two countries.

In February 1999, Atal Behari Vajpayee, then prime minister of India, journeyed by bus to Lahore at the invitation of former prime minister Nawaz Sharif and signed the Lahore Declaration.

In May 1999, three months after the Lahore Declaration, the Kargil conflict occurred, sweeping all efforts to bring the two rivals closer.

Both Pakistan and India have extremist groups that directly oppose the peace process between the two countries. So, the question still exists whether this relationship of love will last or if some tragic incident will sweep it all away.

However, in a time when a majority of countries are developing trade relations with rivals like China, it is not a bad idea to have trade with India.

A reporter on the Business Desk at The Express Tribune who is based in Islamabad.

From Russia, with love