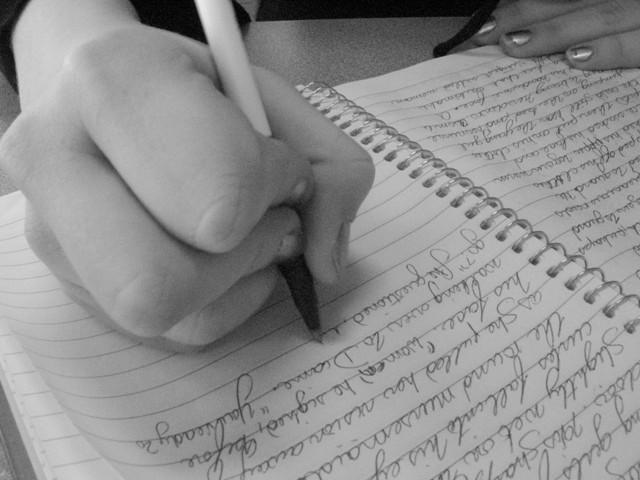 Whenever I did a cut and paste job of basically just stringing together other people’s opinion in a sufficiently cosmetic and superficial manner, I would be rewarded with an A.

I’d like to expand on a pearl of wisdom that I received from where most pearls of wisdom originate ─ my grandmother.

She is a published Urdu novelist and part-time journalist, but more than that she is an intellectual searching for depth in the meaning of death as she sees herself approaching the imminent reality of it. A more popularly acclaimed introduction would be as Bushra Ansari’s aunt.

Lucky for you, I’ve chosen to talk about one of the least morbid topics she happened to discuss with me: Academic writing. Despite having published novels, my grandmother does not consider herself a good writer. She explains that,

“A good writer is one who can form well-structured sentences, use impressive vocabulary, and follow their pre-planned outline for the piece. A great writer, is one who doesn’t need to.”

When journalists are trained to write for the media, they are taught to strip down to the basics. They must abandon long, winding sentences and use ‘big words’ only when they are absolutely essential. Simply substituting a simple word for a more complex synonym does not constitute good writing.

Compulsive use of difficult vocabulary is compared to the young actor who overacts just to show off his entire range of expressions. While published novelists and seasoned journalists seem to be at grips with this concept, the world of academia continues to teach the opposite.

We are teaching university students that the language they use must consist of ‘impressive’ vocabulary and sentences must have academic syntax. The result is a fake, pretentious manner of prose that the author constructs to appease teachers and hit the word-limit while sounding ‘academic’. It is almost as if we demand that all papers consist of unnecessarily long sentences and boring expression.

Re-entering the academic world after working for an English language newspaper can be rather revealing. Every time I would write original, thoughtful material, I would get reprimanded for my taking too much liberty with the language. Whenever I did a cut and paste job of basically just stringing together other people’s opinion in a sufficiently cosmetic and superficial manner, I would be rewarded with an ‘A’.

Now that I think of it, this trend that I experienced at the University of New South Wales (Sydney) was exactly what I had to go through for four years during LUMS. The only difference is, at that time I accepted it as the way of being ‘educated’.

Now, there is an argument for the pretentious academic style. Many teachers insist that learning the academic style is necessary for understanding the complete range of the language before one can truly master it. I understand that reading and using difficult words and phrases is the only way to master them, but why are we forcing it? Is proficiency of language represented by the accuracy with which thoughts can be expressed, or by the number of lesser-known dictionary words that can be fit into sentence? If the academic demand for boring expression is a means-to-an-end kind of learning strategy, then all students should be told this as they are about to graduate.

The current style of academic teaching is a bit like the sophomore who uses expressions like ‘right-wing philosophy’ and then stands around smugly hoping that someone in the room doesn’t remember which hand-side was supposed to represent which specific school of thought. Surely there are less pretentious, more effective ways of developing language.

I would also recommend listening to Sir Ken Robinson’s views on the need for changing education paradigms.