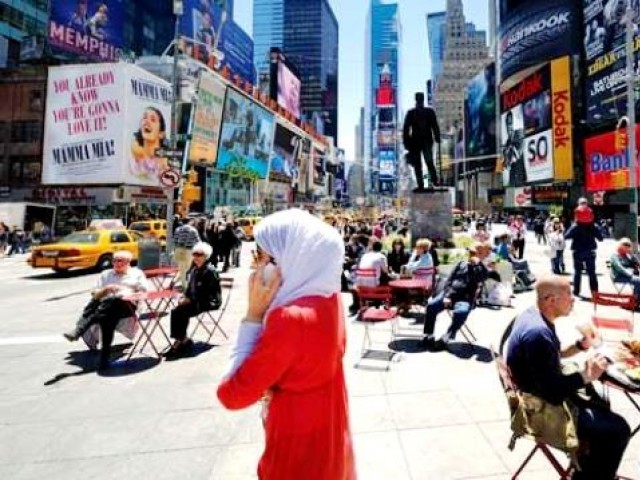 Despite widespread fear of discrimination, Muslims seem satisfied in the US. PHOTO: AFP

Before going to the US, I thought that US citizens hate Muslims and Pakistanis and, therefore, considered all of us terrorists. Consequently, I prepared my mind for all the security nightmares that I might have to endure on US soil.

However, at the immigration counter of the Washington DC airport, I was amazed when the officer there asked me where I was from and for what purpose I had come to the US. I told him that I was a journalist from Pakistan and was attending a fellowship.

“Oh really, you are from Pakistan, Good luck!” he said, while requesting me to move on.

This was my first conversation with a US citizen, and it really helped boost my morale.

During my stay in Washington DC, I had the opportunity to visit the offices of the Washington Post, one of the leading newspapers in the US. My real experience started in New York City, where I had to live all alone and had to work with the New York Daily News, which is one of the largest newspapers of New York City. At the back of my mind was the gnawing feeling that I might be treated as a journalist from a third world country but here, too, my perceptions were dead wrong. I received a warm welcome by the staff and throughout my tenure not for a single moment did I face any sort of discrimination. Even my smallest efforts were appreciated and most of the people there were keen to know about Pakistan and its traditions.

I realised that life in the US is very different to life here as people are more concerned about their own issues. In Pakistan, our lives are often bogged down by largely self-created problems. I really wonder who perpetuates the myth that Americans hate Muslims or Pakistanis. My experience proved otherwise. But then again, my time there was not exactly long and I cannot as such over-generalise my experience. The perception of Islam-hating Americans is as wrong as the perception of all Muslims being terrorists. These have been created through politics and the media.

Such preconceived notions need to change and I think the first step towards that is to actually experience each other’s culture first-hand. It is important to experience things first and then make an opinion rather than believing what others say.