Factory fire: When misery repeats itself, but not quite 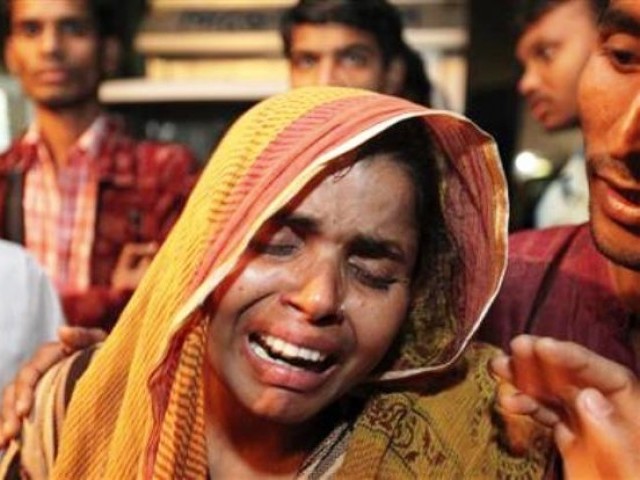 Last I checked, there were absolutely no protests against all the fathers, mothers, children, husbands and wives who lost their lives - out of no fault of their own - in the brutal factory fires.PHOTO: REUTERS

As the closing hours of the day approached, a fire broke out at the Triangle Waist Factory in New York City that resulted in 146 people losing their lives in 18 minutes. The company was a typical textile manufacturing unit based in Manhattan, characterised by long working hours, low wages, and unhealthy, unhygienic working conditions.

The fire erupted on the eighth floor. As a standard company policy, managers had locked the doors to every possible exit – a practice to prevent excessive and unauthorised break from work. Workers who could not escape the building jumped from the eighth, ninth, and tenth floors to the streets below. Some got severely injured; the others were less fortunate and lost their lives.

Majority of those amongst dead had an immigrant background and were available to work on meager wages.

The company was owned by two brothers, Max Blanck and Isaac Harris, who survived the fire themselves but were later charged with first and second-degree manslaughter in mid-April. In this case, the defence was able to tweak the credibility of survivors which resulted in the acquittal of the two men. However, the brothers lost a civil suit later and provided compensation of $75 to each deceased victim.

Later in 1913, Blanck was once again arrested for locking the door in his factory during working hours and was fined $20.

Over a decade later, as the closing hours of the day approached, a fire broke out at Ali Enterprises Factory in Karachi, killing almost 300 people. The company was a typical textile manufacturing unit characterised by long working hours, low wages, and unhygienic working conditions. Workers were unable to leave the office premises because the doors were locked – a practice to prevent them from leaving their shifts early.

The fumes became increasingly toxic in the presence of textile chemicals present in the factory. There was no emergency exit and the only way for the workers to escape was to smash iron bars on the windows to jump the four storey building. The company thrived on immigrant worker population, both from within and outside borders, willing to work in compromising conditions and low wages.

The company is owned by two brothers, Mohammad Arshad and Shahid Bhaila. Murder charges have been registered against the factory’s owners. The government has announced that a retired judge will lead an investigation into this tragedy. Sindh’s Minister for Industry and Commerce, Rauf Siddique, has also announced his resignation as a result of the incidence.

In the weeks that followed in New York, the city identified the dead, recognised their belongings and prayed for the victims. At the same time, protesting voices grew and more and more people demanded justice and action to safeguard vulnerable and helpless workers. From mainstream liberals to conservatives and labor unions, all came together to demand better working conditions. The result was a state commission report and a consequent reforms act which made New York “one of the most progressive states in terms of labour reform”. New laws instated improved building access, fireproofing, availability of fire extinguishers, installation of alarm systems and automatic sprinklers, eating and toilet facilities for workers and limited working hours for women and children.

With each passing day, the dream of a better workplace environment became a reality.

In the week that followed in Karachi, the city identified the dead, recognised their belongings and prayed for the victims. The city also came under the grip of violent protests, however not because of the fire incident, but because a film maker made and uploaded a blasphemous video of Prophet Muhammad (pbuh) on YouTube. More and more people demanded justice and action to safeguard vulnerable Muslims targeted by the irresponsible notion of free speech.

Every faction of society came together to condemn the blasphemous material, consequently, leading to a state holiday to mark an official ‘day of expression of love for Prophet’. Countries including Pakistan, Afghanistan and Bangladesh have blocked access to YouTube following its failure to take the movie off from its server.

Last I checked, there were absolutely no protests against all the fathers, mothers, children, husbands and wives who lost their lives – out of no fault of their own – in the brutal factory fires. The incident seems to have faded away like any other random breaking news receiving a full day’s coverage and so, with each passing day, the dream of a better workplace environment remains far-fetched as do the rights of the poor.

A Fulbright scholar at the University of Delaware, Center of Energy and Environmental Policy, Khurram's interests include research in energy finance, energy policy and political economy of the environment.

No, nuclear power isn't the answer to all our problems!