Factory fires: What you can do to prevent a similar tragedy 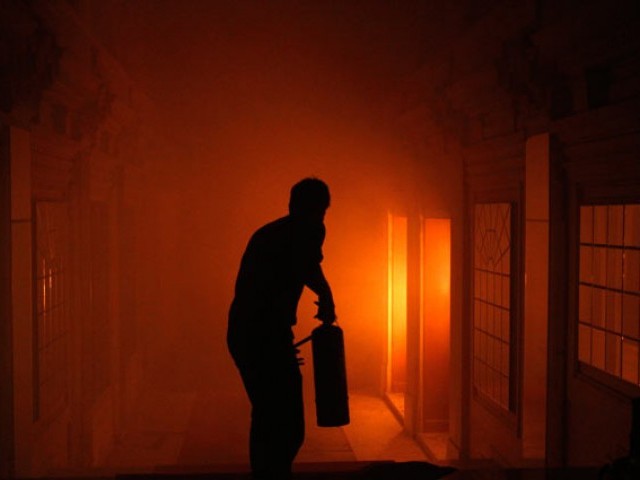 The fire extinguisher has classically been the weapon of choice for knocking evil out cold. Interestingly enough, it can also be used to put out fires. PHOTO: REUTERS

Last week at work, during my lunch hour I was casually browsing the internet while eating my sandwich when I first read about the horrific fire incident in the unfortunate factory located in SITE Karachi.

A few lines in, the gruesome graphic details and the staggering casualty count made me lose my appetite.

Like most people, I couldn’t help but wonder about the horror experienced by the victims during the last few moments of their lives and their helplessness in the wake of imminent death.

After getting over the nauseating feeling, I read a few blogs and comment boards on which the general consensus was that the culprits for the incident were the government and the owners of the factory (hereafter referred to as the “man”).

While this overwhelmingly popular opinion is a fair assessment, I feel that at the same time we the public are ignorant of our own responsibilities and gravely underestimate or completely overlook the potential fire hazards in the places we hold this jurisdiction, that is our homes.

As it turns out, the ground reality in Pakistan is that criticising the “man” and blaming him for all the evils of the universe yields no benefits. So without going into the age-old debate of how we can improve the system, we can focus on what we can achieve as individuals besides the false sense of closure that comes after posting a deep heartfelt condolence message on Facebook.

Most people are unaware of that fact that after a fire starts, it takes about three minutes from being ‘controllable’ to getting ‘uncontrollable’, whereas, the best case response time for emergency services in developed countries is at least five minutes.

Trying to calculate an ETA for Pakistani services (assuming they exist) would just be depressing. Therefore, one can safely assume that if God forbid a fire breaks out in our homes, there isn’t much we can expect from the authorities, other than a false promise of a compensation cheque in a media scrum on the ashes of our burnt down sanctuary.

So, what can be done by the individual to mitigate the risks?

After watching years of TV shows and, in our minds, the only use of a big, bright red fire extinguisher is as an instrument used to deliver blunt trauma to the unsuspecting sidekick of the main villain. Be it on the back of the head after a stealthy approach or by the old fashioned haymaker right to the chin, the fire extinguisher has classically been the weapon of choice for knocking evil out cold. Interestingly enough, the same fire extinguisher can be used to put out fires.

An ABC type fire extinguisher which can be effectively used on the most common controllable fires including the ones caused by electricity can be procured from any superstore. It costs around a Rs1,000, which is a sound investment considering it can one day save our beloved home from burning down or even save lives of our loved ones. It is very easy to use and even children can be trained to use it with little effort.

A = Aim the nozzle at the base of the fire.

In addition, some simple fire safety techniques can be learned just from watching YouTube videos.

These don’t require any level of mastery. A technique like the fire evacuation drill “baby crawl”, is the most effective technique to escape a room filling with smokes without passing out. It can be easily learned and taught. Another important technique is “stop, drop and roll” which can be a lifesaver if your clothes catch fire.

Granted accidents happen, preventive measure can be taken to lower their chances to occur. One doesn’t have to be a certified fire marshal to do a simple hazard analysis. Identifying potential hazards in high risk areas, such as the kitchen or the place where you keep your generator, can significantly reduce risks.

Our lack of awareness and preparedness is a bigger threat to our well-being than a fire itself.

For example, the worst thing one can do to try put out fire caused by electricity is by throwing water at it, which is the most common response of a panicked individual. Hasty, uninformed actions like these escalate the situation to becoming uncontrollable almost instantly.

Finally, the next time you find yourself in a pickle, trying to figure out what to present to a friend or any acquaintance on their wedding our house warming, consider buying a fire extinguisher. They may not know it, but God forbid, if ever required, it will be much more useful than a set of ice-cream bowls.

A Pakistani Engineer working in the oil and gas industry, Sami tweets as @samirauf twitter.com/samirauf