Is Afghanistan the Drug’istan for Nato? 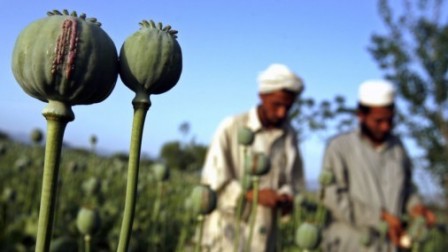 Afghanistan's yearly opium output accounts for more than 90 per cent of the global supply.

The heavy cultivation of opium in Afghanistan is known to all of us. The pertinent question then is: why has Nato been unable to control this opium cultivation in the nine years of its occupation?

According to a recent article on TIME titled “Is NATO to Blame for Russia’s Afghan Heroin Problem?” Russia has lambasted the US and NATO for not doing more to stop little baggies of heroin from getting into the hands of Russia’s youth.

Russia further alleged that “NATO has fueled drug production by refusing to destroy Afghan poppy fields, which it stopped doing last year in the hope of winning the support of opium farmers.”

“In its way, Russia is making an important point. Between 2005 and 2009, Afghanistan’s yearly opium output jumped from 4,000 to 7,000 tons, and it now accounts for more than 90% of global supply, according to the United Nations. Russian state statistics say that opiates such as heroin and morphine kill around 30,000 Russians every year, three times more than the total number of Soviets killed during their 10-year war in Afghanistan in the 1980s.”

But the question stays the same: who will control this illicit drug cultivation and its trafficking and how will it be coped? Will the US led Nato forces and CIA will slash down the opium cultivation? Seriously?

Hordes of news reports regarding the Afghan opium cultivation have been highlighted on the media lately. Nearly all of them blame US led Nato for not doing enough to undermine the opium cultivation. Of late, a report in the New York Times surfaced. It said:

“Ahmed Wali Karzai, the brother of the Afghan president and a suspected player in the country’s booming illegal opium trade, gets regular payments from the Central Intelligence Agency.”

Ahmed Karzai, however, denied this news, saying that “he cooperated with American civilian and military officials, but did not engage in the drug trade and did not receive payments from the CIA.”

Simultaneously, American officials also acknowledge that the relationship between Mr Karzai and the CIA is wide ranging.

Whatever the case maybe, one’s doubt on the role of Nato in dealing the opium cultivation is valid.

Nato believes that the March offensive in Marjah redoubled the crackdown on drug traffickers with the aim of cutting the Taliban off from their main source of funding. Meanwhile, according to the UN Office on Drugs and Crime (UNODC): “a mystery disease infecting opium poppies in Afghanistan could cut this year’s illicit crop in some areas by up to 70 percent. The disease has led authorities to expect a ‘significant’ reduction in opium production this year.”

UNODC further said that the output of opium could fall by up to 25 percent.

According to the above explanations, the Marjah operation as well as the disease infecting opium poppies, the natural inducement, must bring a significant reduction in opium cultivation this year. Stats on it will be cleared up in the near future.

The solution to reduce the illegal opium cultivation is quite simple in my view. The impoverished people of Afghanistan cultivate opium not because they enjoy doing it or they consider it some sort of a redemptive act. They cultivate it to get money to buy food to feed their families. Opium is cheaper than the food many Afghan families consume. According to a blog at New York Times: “The poverty in the region (Badakhshan) is so consuming that parents blow opium smoke into their children’s noses to soothe the pangs of hunger.” The solution to end all of this is to overhaul the country’s infrastructure. Instead of spending billions of dollars on the war in Afghanistan, the United States must spend richly on humanitarian work. Humanitarian work, it seems, has nowadays become a sole job of NGO’s and private humanitarian organizations rather than the respective governments.

In Pakistan, a horde of people die each year due to the drug abuse. During the time of former President Musharraf regime, the then Health Minister stated that Afghanistan’s opium trade is sabotaging the efforts of Pakistan in controlling the spread of HIV in the country, particularly amongst the injection drug users. To be sure, drug trafficking and drug abuse directly affects

Pakistan’s internal security as well as its social stability. It ought to be dealt with iron hands.

Being a Pakistani, I’d also like to ask the government of Pakistan as to what role it is playing to limit the Afghan drug cultivation and its trafficking? According to some analysts, around a quarter of Afghanistan’s opium production is shipped through Pakistan from the Khyber-Pakhtunkhwa and Balochistan region. Pakistan government has all the right to question the ability and legitimacy of Nato in regards to the Afghan opium cultivation and trafficking.

Despite the fact that the government of Pakistan has taken some measures to cope with the drug trafficking issue, the trafficking is still prospering in Pakistan and feeding problems of drug addiction and the prevalence of HIV.

Does this not substantiate the fact that the government should do “a lot more” and not just “more” in this regards?