Can democracy still be unfair if everyone votes? 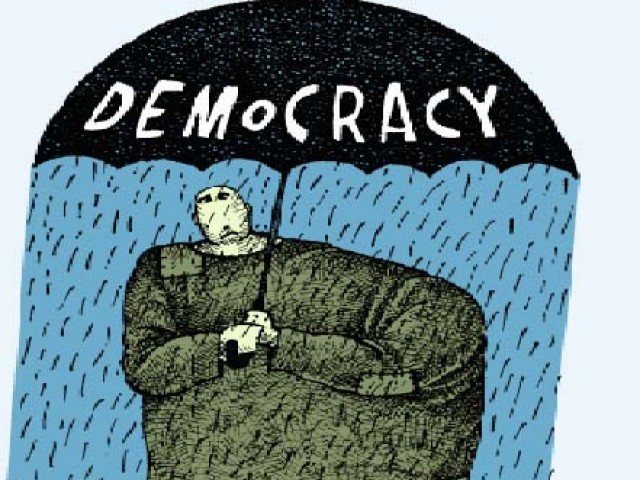 Banning the display of religious symbols in France; the ban on construction of minarets in Switzerland; they are all gifts of democracy given to us by educated people. PHOTO: FILE

Mirza is a very good friend of mine but sometimes he just talks utter nonsense. Yesterday evening I was extremely blunt when he told me that he didn’t understand democracy.

“Are you in your senses, Mirza?” I was shocked.

“Absolutely,” he was calm.

“Think again, Mirza,” I couldn’t believe what he had said,

“Democracy, which is the best political system in the world; the system that offers solutions to all our problems; the system due to which common people like you reach the corridors of power; the system–”

“Yes,” he interrupted me,

“I don’t understand it.”

My voice rising, I said,

“So what do you want, dictatorship? Don’t you remember what Yahya, Ayub and Zia did to our country? What about Musharraf, do you want him to come to power again?”

“Oh…now I get it. You are in favour of Sharia law. You maulvi.”

“Stop being judgmental, Mangalwala. I hate it when you assume that no sensible person can favour Sharia law. And let me remind you that I didn’t even say a word about Sharia. You mentioned it,”

After he made me realise my mistake I said,

“Then what do you mean you don’t understand democracy?”

“That should have been your first question, my dear,” he smiled.

I wanted to hear this.

“How do you define democracy?”

“Don’t you remember? It is the best revenge,” I said, smiling.

“Well, this statement has been used in the previous elections. It won’t work now,” he returned my smile.

I gave him another statement ─ a celebrated one,

“Give me the actual definition, Mangalwala,” he rejected this one, too.

“I am surprised that you don’t even know the definition of democracy,” I said,

“In simple words, it is a political system in which everyone is asked to give their opinion and all decisions are made on the basis of that opinion.”

“But all people never give their opinion,” he argued,

“Whether it’s the US or Pakistan, only forty to fifty per cent of the population participates in the elections, which means that democracy represents only half of the population, and sometimes even less than half.”

In a convincing tone I rebutted his argument, still trying to make him understand, I said,

“Well, the issue is in the people who do not vote. It is not a problem with democracy,”

“Okay. Tell me, what if there are three candidates in an election; two of them get 33% votes each and the third one gets 34% votes; your democracy means that the one who got 34% votes will be declared winner despite the fact that 66 % people rejected him?” he came from another side.

“Do you have any other option?” I said.

“We will talk about alternate options later. First you tell me, do you agree with this rule of majority?” he asked.

“Obviously,” I was clear.

Shocked by his reaction I exclaimed,

“But this time you are,” he was adamant.

“What does smoking have to do with majority rule of democracy?” I was surprised.

“Your two younger brothers are smokers,”

Sensing the creation of a trap, treading carefully I asked him in a puzzled,

“As far as I know, you do not allow anyone to smoke in your house and your brothers have to go outside the house when they want to smoke. If you follow democracy, then the rule you have implemented is wrong,” he came to the point.

“We are not discussing whether it is a bad habit or not. We are discussing the majority rule of democracy,” Mirza said.

“Listen, this is not a correct example,”

I was loud now,

“My age, my education and my maturity level are higher than my younger brothers. I know best what should be allowed in the house and what shouldn’t be.”

“But does democracy give any weightage to age, education and maturity level? Democracy means one person, one vote. They are two; you are one. They are in majority,”

I could see that he was enjoying this argument now.

“Well, in a democratic country, laws are not just made on the basis of majority rule. Regulations are debated; people are explained about the pros and cons and then decisions are made,” I tried to clarify my point.

“So is the final decision made after the debate and going through the pros and cons?” asked Mirza.

“People are asked to vote after this whole process and then the final decision is made after counting the votes. Whoever gets more votes is declared the winner,” I explained.

“What if after the whole process, people still vote for something unreasonable?” he said.

“It can’t be. How is it possible that sensible people with full knowledge of right and wrong vote for something unreasonable? Never,” I rejected.

“It can happen. Your brothers are both educated guys who have full knowledge of the evils of smoking. You have also discussed this with them many times but still they choose to smoke,” bringing the topic back to smoking,

“Let’s look at the world. Banning the display of religious symbols in France; the ban on construction of minarets in Switzerland; they are all gifts of democracy given to us by educated people. All wars waged by the US have been in the name of democracy. Obama, who bailed out financial institutions with public tax money, is also a democratic leader. Do you want me to give you some other examples of ridiculous things done by educated and democratic people or were these enough?”

I started to think about what he had just said.

“If you insist, let me change the example. Two months ago, you were designated as the head of your department. Who gave you this position?” he questioned.

“The owner of our company. He gave me this position on the basis of my performance,” I was proud of my job.

“Why didn’t he choose the democratic process? He should have asked the people of the department if they wanted you as their supervisor.”

I could tell now, that Mirza was keen on confusing me.

“Why should he ask the employees? It’s his company. It’s his money. He decides,” I defended my boss.

“So if you have money, you can be a dictator?” Mirza smiled.

“Again you are giving a wrong example, Mirza,” I tried to convince him again,

“Everyone has the right to choose any system for themselves. Nobody can impose something on you. It is freedom of choice.”

“But when it comes to your America, we all know how it imposes democracy on everyone,” he was being sarcastic, “Isn’t it strange? You don’t implement democracy in your house or your offices but you only insist on this one system when it comes to countries. Tell me what if your boss realises today that you are not capable of the job given to you and that he had made a mistake?”

“He would simply kick me out of the company, what else?” I was a bit angry now.

“But democracy doesn’t allow this either. People have to wait for five years even if they instantly realise that they had made a mistake and chosen the wrong people to rule. That’s the reason, Mr Mangalwala. That’s why I don’t understand democracy,” he repeated his statement.

“You know, Mirza. Things are not as simple as you think they are,” I was fed up now.

“They are not as complicated as you try to make them either,” he mocked me.

“Actually there is no point in explaining it to you because you don’t want to understand,”

I gave my final statement and left his house, just to return the next evening to for another heated discuss about something completely different with Mirza.

Item songs and flirting with danger

Iran's female minister was sacked, but not because of her gender

Women are not treated as ladies even in developed countries