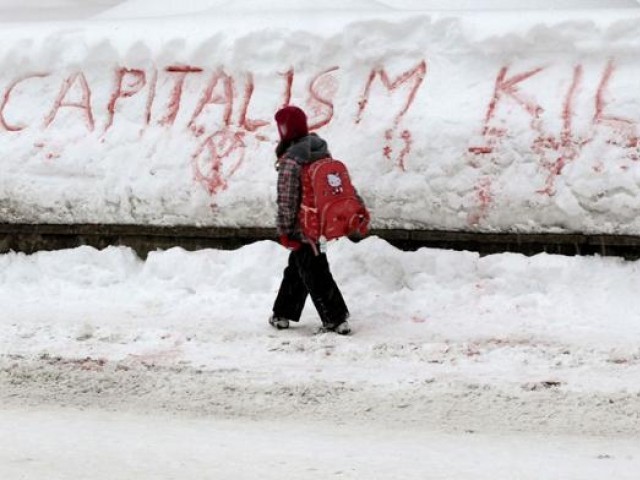 It is evident that the real beneficiaries of capitalism — a system often derided as being predatory, greedy and crony, by old-school revolutionaries — are the citizens of the emerging economies. PHOTO: REUTERS

The word ‘capitalism’ — or sarmaya darana nizam’ — has always had an unpleasant ring to it in Urdu language newspapers. That’s probably why one rarely finds a politician in Pakistan praising capitalism.

Even our public intellectuals tend to carefully add qualifiers such as economic justice and social equity while calling for a free-market economy. However, shouldn’t the centrally planned economic system, rather than capitalism, stand discredited after the collapse of the Soviet Union in 1991? After all, capitalism has lifted millions of people out of poverty since its concluding triumph over socialism two decades ago. A cursory look at growth statistics reveals the unprecedented expansion that capitalism has caused in the global economy.

Between 1990 and 2010, the global GDP increased from $22.1 trillion to $62 trillion while emerging markets accounted for over half of this worldwide growth. Calling it the largest economic expansion in human history, political analyst Fareed Zakaria argues that it was actually spurred by a huge movement of western capital to Asia and all over the globe.

One has to be utterly biased to deny that the unhindered movement of capital and transfer of technology across borders — two of the many features of capitalism — have facilitated the entry of roughly two billion people into the global economy as active participants.

Most of these people belong to the emerging markets which, until a few decades ago, had dysfunctional, centrally planned economies, such as China and India. Against this backdrop, 100 per cent of global growth in 2009 came from the same emerging markets, according to the International Monetary Fund (IMF).

It is evident that the real beneficiaries of capitalism — a system often derided as being predatory, greedy and crony, by old-school revolutionaries — are the citizens of the emerging economies. According to the September edition of Finance and Development, an IMF publication, per-capita income in emerging and developing economies has grown almost three times as fast as in advanced economies during the past two decades. After the global economic slowdown in 2009, the emerging markets and developing economies recovered with a growth rate of six per cent in 2010 compared with just 2.3 per cent for advanced economies.

It’s up to us whether we want to share blessings or miseries.