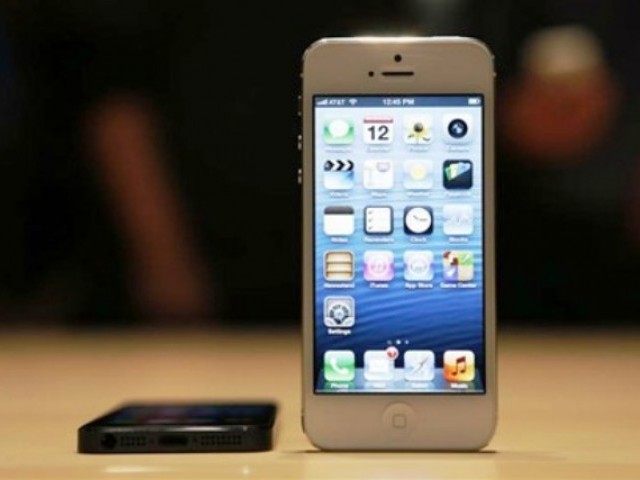 The iphone 5 is housed in an aluminium body with a high quality glass screen, two-tone back, and ceramic/pigmented glass at the top and bottom giving it that rich, refined, and hi-tech look that you desire from a phone designed in California. PHOTO: REUTERS

After days of speculation and hype, finally came the moment when Apple unveiled the iPhone 5 along with a new range of iPods and iOS 6 on September 12. Being an Apple enthusiast, I had expectations of a revolutionary product that would yet again re-define the phone industry. Obviously, however, no such revolutionary product was launched and what we saw was an improved iPhone. I was disappointed, and so were many others that expressed their emotions on Facebook and Twitter.

As the Foo-fighters concluded their performance and iPhone 5 event came to an end, I switched off my screen and headed for dinner at a friend’s house. The dinner was sumptuous and the talk was light. It helped clear my mind and focus on more rational parts of what Apple had just unveiled to the world. I realised that it did make sense from the customers’ point of view. So here is a list of four key differentiating features of iPhone 5 that should really matter.

You may contest this until you actually hold it. I say this from my experience of using almost every product designed by Apple. The 18% slimmer and 20% lighter iPhone 5 (vs. iPhone 4S) is housed in an aluminium body with a high quality glass screen, two-tone back, and ceramic/pigmented glass at the top and bottom. This gives iPhone 5 that rich, refined, and hi-tech look that you desire from a phone designed in California. It can never be confused with a phone designed in Helsinki, Seoul, or Taiwan. That’s differentiation!

Inside the iPhone 5 box you will find newly designed EarPods. Don’t take them lightly as they may transform your music experience. The new EarPods are designed to rest and stay comfortably in the ear, relay music directly into the ear, and maximize the airflow to give the best sound. In short, Apple has harnessed technology and science to create a much improved music experience. I don’t see the need to buy beats headphones anymore.

Unlike any other smartphone manufacturer, Apple designs its own hardware and software for iPhones. It means that iPhones are optimized to deliver best performance. Building on that concept, iPhone 5 employs a faster A6 processor that in combination with the new iOS 6 doubles the speed of phone performance and graphics. It also enables iPhone 5 to capture photos 40% faster as compared to iPhone 4S running an earlier version of iOS.

Apart from the key differentiating factors mentioned above, other enhancements that bring iPhone 5 at par with its competitors include; higher resolution Retina Display, better iSight camera for photos and video, improved maps and a longer screen.

What the iPhone 5 doesn’t have

Some of the features that Apple has missed incorporating in iPhone 5 include; free music streaming, NFC technology for wireless payments, and wireless charging. It also doesn’t have a battery life that is better than its competitors.

With iPhone 5, Apple has tried to address technical specification gaps that existed between iPhone 4S and other leading smartphones. However in my assessment, Apple has not made an attempt to position iPhone 5 on engineering higher ground but it has consciously positioned it on user experience supremacy. In fact that has been Apple’s positioning since the launch of original iPhone and it has once again reinforced it with iPhone 5. We will know whether or not this positioning still works when iPhone 5 starts shipping on September 21, 2012.

A fond traveller and right-hand batsman, Aamir is an experienced marketing professional currently living in Riyadh, KSA. An entrepreneur at heart and a father of two awesome boys, he tweets as @aamiraltaf twitter.com/aamiraltaf

The 19 billion dollar question: Can Facebook compete with Google?

Rest in peace Blackberry, you were a good friend!

Is the Smartwatch smart enough?

So, which tablet should you buy?