Please, spare us from your PDA! 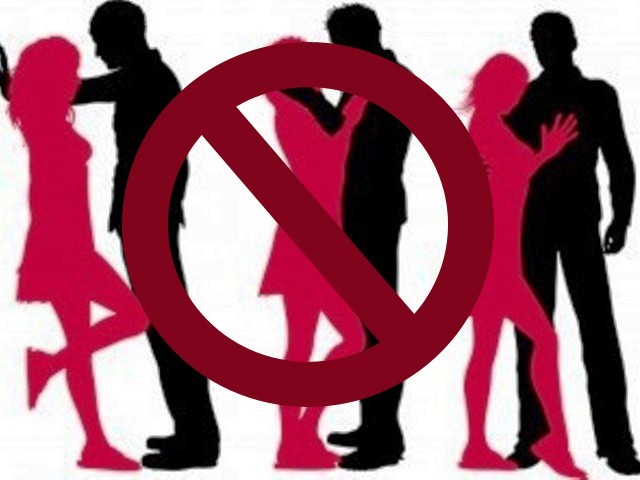 Just because the lady present with you is your wife, does not give you the licence to scandalise the people around you or change the settings of a particular public place. DESIGN: ERUM SHAIKH

It was Saturday night and I had just returned to Pakistan from an oil and gas project in Africa. I decided to visit a restaurant in Karachi with my family so as to spend some quality time with them. While waiting for our food to be delivered, we enjoyed the ambience and general atmosphere at the restaurant; it isn’t often that I get to spend time with my family given the nature of my work.

Just then, a couple walked in and sat right next to our table. I don’t know whether they were friends, husband and wife or cousins; however, the proximity in which they were sitting, at a place where there were many other families surrounding them, made me uncomfortable. Being present with my brothers, their wives and my mother, the distasteful pose in which the couple was sitting was not only vexatious to me, it was offensive to my entire family.

Since our food was still not ready and we would have to wait a while longer, the uncomfortable silence at our table and nervous gestures towards the couple finally got the best of me. It was so awkward to sit next to my mother – who I have the hugest respect for – and witness a couple disrespecting the people around them by displaying their affection so publicly.  I thus, asked the restaurant manager to politely ask that couple to behave in a manner more appropriate to a family restaurant.

After the waiter approached them and spoke to them, the couple duly left the restaurant.

This tendency of exhibiting one’s affection for the entire world to see, in this distasteful fashion, regardless of the relationship between two people, was and still is unfathomable to some people, including myself. What relationship the couple constituted is really none of my business and does not matter to me. Having said as much, I believe that this does not give them the right to make other families and couples, including mine, uncomfortable being in the same vicinity – this is what matters to me.

If you have this sudden outburst of love and affection for your spouse, please take it to the privacy of your own home and don’t disrupt the sanctity of a public place. Have some respect for the people around you. Maybe your upbringing differs from these people and you don’t consider public displays of affection (PDA) in bad taste, but everyone doesn’t think like you. The vast majority of people find this offensive and uncomfortable. Not only do your obscene actions destroy the familial atmosphere of a public place, it is also disrespectful to our cultural norms and values. An ordinary couple, married or not, are never stopped from being together in a public place, but those who are likely to cause a level of nuisance are rightly asked to mend their ways.

Recently, I came across a blog on The Express Tribune website, where the author had alleged that a particular restaurant was intolerable towards a certain level of affection expressed by him towards his wife. Now stories differ as to what exactly happened, but he described the experience in a bitter, helpless tone, much like those of our minorities when they are being unjustly persecuted. The difference, however, is that the complaint of the minorities are valid whereas those by the author were not, in my opinion.

Just because the lady present with you is your wife, does not give you the licence to scandalise the people around you or change the rules of a particular public place.

“Do in Rome as the Romans do” – a saying the author may not be familiar with. Every society has its own norms, values, culture and traditions, you may agree or disagree with them but that doesn’t change their existence, and being a part of that society, you have to live with that.

I had said this in my previous blog, and still stand by the opinion, that secular extremists lack what they teach; tolerance. Why would the writer want an entire section of society to be tolerant about something alien to them, whereas, on the flipside he is not ready to tolerate the accepted norms prescribed by that society?

Is Mr Noman Ansari not aware of the fact that there are accepted limits for cross gender interaction in this society that have been prevalent well before he was even born? These are norms that he needs to understand and respect.

If he is inclined towards sitting with his arm around his wife, why go to a family restaurant? There are many places, such as Evolution, Espresso, Sea View (where couples openly interact and no one stops them) where nobody would object to this behaviour; why not go there? Whilst quoting the incident, the author indulged in the secular extremist trademark; the long speech on intolerance and Islamisation of a faction of society that is ‘most intolerant’.

I am not of the view that our society is perfect – it’s far from it. However, I do understand that there are certain rules present in every society that have to be respected, whether they are written or not. Our societal norms have nothing to do with Islam -these are all eastern cultural values and exposing your religion to taunts of this nature is not only distasteful it is down-right disrespectful.

So again, I would like to reiterate the famous statement, ‘Do in Rome as the Romans do’, and maybe do in Pakistan as the Pakistani’s allow. I applaud and encourage the McDonalds staff for having the courage to protect the sanctity of its atmosphere and standing up to secular extremism that is clouding our society.