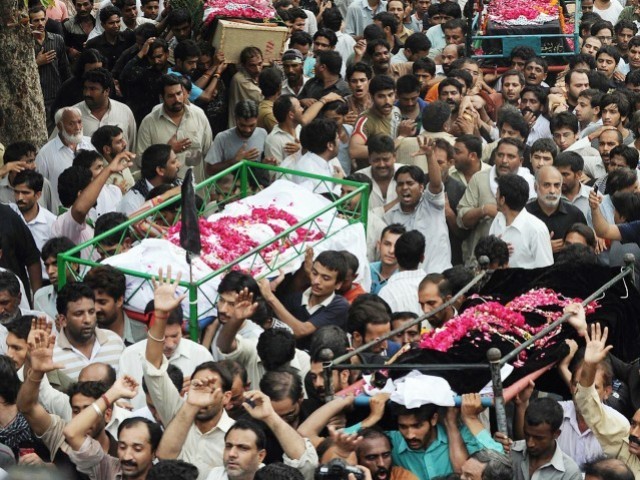 Thirty one people were killed in an attack on a Shia procession on September 1,2010 PHOTO:AFP

Ever heard of Murphy’s Law of Terrorism? It says: “If a suicide attack can take place, it will.”

If the province is Punjab and the interior minister is Rana Sanaullah, the probability of a terror attack maximizes. But it would be unfair to other law enforcers (intelligence agencies in particular) if the entire credit of incompetence, criminal negligence and corruption goes to the PML-N minister. After all he’s not the only one who allowed sectarian violence to prosper and flourish under the protected umbrella of law enforcement. Pakistani courts, military agencies, police and rangers made sure not to catch any terrorist who was linked to sectarianism and if someone ever was caught, they were back on the streets on the basis of lack of evidence, political influence or for reasons that we don’t like to discuss in public.

A prime example is the escape of four Jundullah militants from police custody in June, who were being tried for the deadly Ashura attack earlier in Karachi. The government later blamed the police for the security lapse (how convenient).

After the Ashura incident a series of sectarian attacks took place including an attack on a bus full of women and children who were on their way to attend Moharram procession. Sectarianism in Karachi didn’t stop there, there hasn’t been a month when sectarian killing didn’t take place leaving many innocent civilians shot dead. Brothers Shahzad Raza and Asif Raza belong to one of the many families who lost their loved ones in sectarian violence.

I am aware that this country is going through the toughest times in its 60 year history. Every day there is a new story which leaves us shocked, distressed and dispirited. We detach ourselves from every incident unless it is personal. We indulge in discussions that revolve around how these terror attacks are CIA funded or a reaction of Muslims who are disgruntled by the US presence in Iraq, Aghanistan and Pakistan. Religious clerics who can actually talk some sense into the trigging hands and stop them from killing fellow Pakistanis, conveniently shy away – taking no responsibility at all. But then religious clerics who went out of the way to condemn terrorism, like Dr. Sarfaraz Naeemi, paid the price for their patriotism.

So the question arises where we go from here? We can blame Black Water and call attacks a reaction to drone attacks because we don’t want to take any responsibility for the religious intolerance that has existed for years. Or we can adopt the easy way out and ban the religious processions because ideologically speaking we don’t have anything to do with them and every blast brings strong graphics on the screens which kind of spoils our mood. Or can we just condemn these attacks and ask victims to stay calm because that’s what  authotities do best after every attack.

As terrorist attacks continue it’s hard to keep track of who died and for what reason but with every innocent death, Pakistan dies a little. With every lost life, the flame of what remains to be called hope diminishes. And this will continue to happen, unless we decide enough is enough!