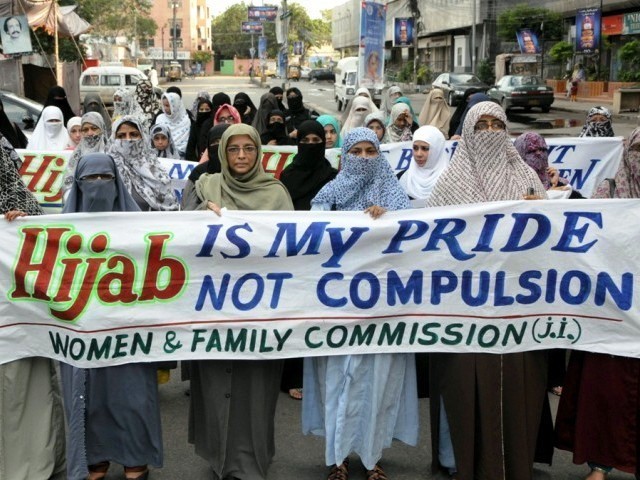 While demanding that the Hijab be made compulsory in the constitution, JI activists in Multan felt no qualms carrying a banner that read, “Hijab is my choice not my compulsion’. PHOTO: FILE/EXPRESS

Scrounge for your scarf; dig out that dupatta – its World Hijab Day!

Unlike ‘Earth Day’ or ‘World Cancer Day’, though, ‘World Hijab Day’, has not, as you might initially think, been decreed by the UN, the organisation which earmarks certain days for international observances, designed to further its goals of world peace and social progress.

No, World Hijab Day has in fact been declared by Pakistan’s biggest religious political party Jamaat-i-Islami to “counter the infidels’ conspiracies against the Islamic tenets”. The way to do that is by urging women (presumably) to wear a hijab and cover themselves up real good at all times.

That’s right, that ‘counters’ the conspiracies of infidels, and doesn’t validate them.

How does one begin to express the pleasure one derives from this?

The Ameer (head) of the Jamaat-i-Islami pooh-poohing the double standards of ‘the west’ and hijacking the discourse of modernism and human rights to further a concept that would be anathema to most liberals. This is a most delicious situation.

Is this sly, deliberate subversion on the part of the Jamaat-i-Islami?

Is the religious right appropriating the concept of ‘choice’, ‘rights’ and ‘human dignity’ to mock modernism itself?

I would be tempted to believe that, but I’ve met these guys.

This is not a critique of modernism – the sloganeering is earnest (if conviction-less) and these guys are just as modern as your next secular-liberal-feminist-freethinker.

“Hijab is my choice”, adding, a little while later,

“Hijab is my protector.”

“Perfect opportunity to educate my non-Muslim mates on Hijab,” says another tweeter.

But it is not just the feelings of earnest adherents that World Hijab Day has stirred. Sure enough, the liberal socialist brigade has jumped in the fray, starting a hashtag – ReasonsToPutMenInBurqas.

While JI has hijacked the concepts of modernism, it has not had to turn to it to supply contradictions and inconsistencies. So while demanding that the Hijab be made compulsory in the constitution, JI activists in Multan felt no qualms carrying  a banner that read,

“Hijab is my choice not my compulsion.”

Despite all this, World Hijab Day feels strangely authentic, and that might be the most disturbing thing. Free thinking is not what it used to be …