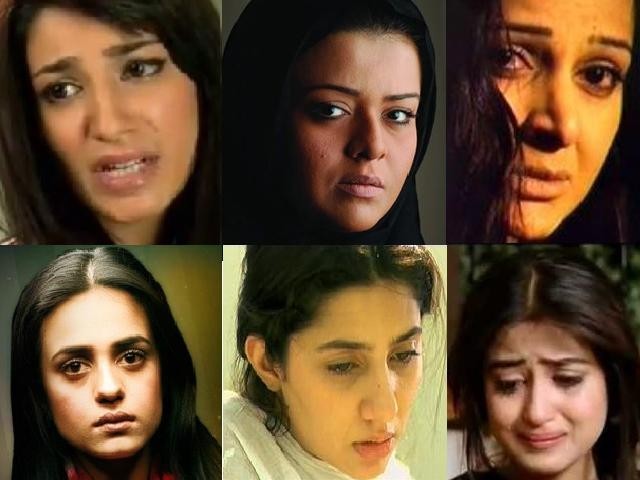 Women are stereotyped as weak and the inability to stand up for themselves is portrayed as a virtue. DESIGN: IMAAN SHEIKH

Pakistani drama culture is back with many brilliant writers and directors entering the industry and producers investing generously.

However, recently it seems that our writers have run out of ideas. It is like our society has no other issues other than ‘khandani’ politics and scheming in-laws. To quote the way my brother puts it:

“The women are always the most innocent creatures while men are vile, cruel and evil and are always lured away by the evil sister or evil friend and eventually they realise their loss and end up sorry. The end.”

Sadly I have no choice but to agree with him.

The reason it is so disturbing is that instead of portraying and motivating women to be strong and independent, they are displayed as petty creatures, who need constant protection and those who dare to make their own decisions are nothing less than evil. The girl must know that the sole purpose of her existence is to get married.

Well, what if she can’t find a suitable match?

Why isn’t she encouraged to be confident enough to make a future for herself?

Women are stereotyped as weak and the inability to stand up for themselves is portrayed as a virtue. There are many examples to prove the above point but the one ripest in my mind is a scene from the serial Madiha Maliha.

There is a stark contrast between the circumstances of the two sisters. While the obedient sister wastes her life away reading digests, the other, who is planning a life ahead, is portrayed as evil. When ‘Maliha’ suggests to her sister to go out and put her skills to use instead of sitting at home doing nothing, ‘Madiha’ just stares at her in disbelief and is only able to utter the words,

Another example is the drama Vasl, which is currently being aired from the same channel as Madiha Maliha.

The lead character, ‘Hina’, is a doting wife and a mother of two but is so helplessly dependent that when her husband divorces her and takes away her children, all she does is ponder over the tragedy instead of trying to get back to them. In an attempt to get to her children back, she marries a US citizen, but when he tells her to stay put instead of trying to find her kids, she is bound to do as he bids.

Reason: she is a good and obedient wife who, despite having access to all resources, cannot take a stand for her children.

‘Marina’, on the other hand, is a headstrong and ambitious woman who bluntly tells her husband that she won’t start a family till she establishes her career. The victim in this situation is the insecure husband who sulks when his wife is promoted at work instead of appreciating her.

Man Jali is yet another story of a woman’s sacrifice. The main character named ‘Zareena’ consumes herself compromising for a corrupt and cruel ‘maulvi’ husband. Despite knowing all that he is up to, she never questions his behaviour so she can ‘protect’ him and her home. How such behaviour helps a family, I can’t even guess.

Why are women in our society made to think that their so-called sacrifices (read: cowardice) are helping anyone? Why is there such a need felt to maintain an abusive marriage? People normally say, it’s a necessity driven by the need to provide children with a ‘normal’ home. But how can you ensure the mental health of children who watch their fathers abusing their mothers constantly?

It is really ironic that women in contemporary serials are portrayed in such light while the female characters in serials released in the 70s and 80s were strong and independent, and weakness was condemned.

A Mass Communication undergrad and a blogger, Farwa tweets as @fbNaqvi. twitter.com/fbNaqvi

Nothing better to do? Wage war over Ayesha Omar's T-shirt!