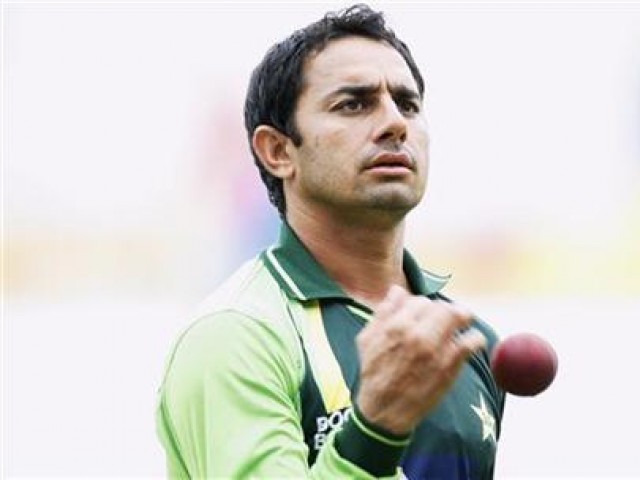 A hundred and twenty wickets in tests, ODIs, and T20s! And he still does not get nominated for the the Cricketer of the Year award? PHOTO: REUTERS

“I don’t mind that I have not been shortlisted for any of the awards. I will try even harder next year and try to win the award next year Insha’Allah.”

So are we Pakistani fans cribbing for no reason or are we justified for feeling that Saeed Ajmal was unfairly treated?

Firstly, lets take a look at the shortlist of nominees for three of the awards:

ICC ODI Cricketer of the Year:

ICC Test Cricketer of the Year:

ICC Cricketer of the Year:

They’re all great cricketers, no doubt!

What do you think the criteria is behind selecting these cricketers as the shortlisted nominees for these awards?

The awards are for the period between August 5, 2011, and August 4, 2012. Let’s take a look at who achieved what during this period in ODIs and Tests.

Typically I show the leading 10 run scorers whenever I write about leading batsmen in a series or a year, and so on. Here, I had to increase the list further to highlight Dhoni’s performance considering he’s one of the nominees for the ODI Award.

Yes, Dhoni has been nominated for the ODI Cricketer of the Year award even though he was not among the 10 leading run scorers during the year.

So what criteria do you think were used for shortlisting Kohli, Sangakkara, and Dhoni among the batsmen for the ODI award?

From what it seems to me, they went for the two leading run scorers (Kohli and Sangakkara) and the one with the highest average (Dhoni).

Don’t you think that maybe Dilshan should have made the cut instead of Dhoni? Dhoni’s average is significantly bloated because of his not-outs, which account for 50% of the 22 innings that he played during the stated period.

The choice of Lasith Malinga among the shortlist of nominees for the ODI Cricketer of the Year award seems more straight forward ─ he is miles ahead of any other bowler in terms of number of wickets taken during the stated period.

Now you can see a pattern emerging among the choices made for the shortlisted nominees. For the three batsmen chosen ─ Sangakkara, Clarke, and Amla ─ the choices are of the two leading run scorers and the one with the highest average during the stated period, exactly the way it was done for the ODIs, as shown above.

But does it make sense? What makes Hashim Amla more deserving than Mohammad Hafeez? Or for that matter, Shivnarine Chanderpaul? (Please don’t read this as a comparison between the class of these batsmen. After all, the nominations have been made based on these performances and not on how good a batsman is technically or how good he looks while executing those cover drives.)

Now this is where it gets really confusing. While the same sort of criteria seems to have been used for selecting three batsmen as the nominees for the ODI and Test awards, this is not the case for bowlers.

The bowler nominated for the Test award, Vernon Philander, has undoubtedly had a phenomenal year. No one even comes close to his average and strike rate, however, he is not the leading wicket taker.

Moreover, if the leading average or strike rate were the criteria for selecting the nominee from bowlers, then it should have been Sunil Narine or Steven Finn who should have been nominated for the ODI Cricketer of the Year award, and not Malinga.

Whereas, if wickets was the criterion, then it definitely Saeed Ajmal should have been nominated for the Test Cricketer of the Year award. Don’t forget that those performances also include match-winning performances in each of the three Tests that Pakistan beat the world number one Test team in.

How can this be ignored? Seriously!

We are not done yet. There is the final category, the Cricketer of the Year award, wherein Ajmal has also been unfairly excluded.

The same three batsmen that were nominated for the Test award, have been nominated for the Cricketer of the Year award, but this time the same criteria, that is two leading run scorers and one with the highest average, was not used.

These are performances of batsmen across all formats (Tests, ODIs, and T20s) during the stated period, and it really makes me wonder why Kohli and Dilshan were ignored from being nominated. Look at how far down the pecking order Amla is, and this time he does not even have the best batting average.

Now this is where the real shock comes.

Just take a look at what Saeed Ajmal has achieved across all formats of cricket during the stated period.

Actually, take a look at it again. No bowler even comes close to that performance.

A hundred and twenty wickets in Tests, ODIs, and T20s! That’s 40 wickets more than the next bowler on the list; and he still does not get nominated for the the Cricketer of the Year award?

Now do you really think that Pakistan fans are cribbing for no reason at all? How can anyone explain the exclusion of Saeed Ajmal from the shortlist of nominees?

I really do not think that there is any logical explanation to this. None whatsoever.