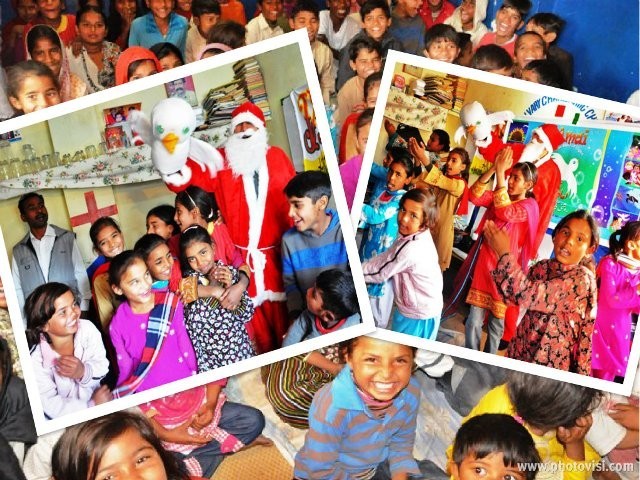 In this, my wish is to celebrate next Christmas with Rimsha. I just hope it becomes a reality. PHOTOS: FAUZIA MINALLAH

It has been nearly two weeks now that 11-year-old Rimsha, who is reported to  have Down’s Syndrome, is languishing in Adiala Jail. All this time a wounded child has been in a jail for hardened criminals while the experts determined whether she is 11 or 12, mentally ill or not.

These photos were taken in December 2011 during an art workshop in which nearly a hundred excited children received gifts from Amai and Santa. The children sang hymns, danced and enthusiastically thanked the visitors.

At the end Ahmad Faraz (Santa) told the children that he was a Muslim but loves all children. Rimsha’s younger sister and brother were among the children who received gifts from Ahmad Faraz – a ‘Muslim’ dressed up as Santa rejoicing with Christian children.

Like many ‘special’ children in Pakistan, especially those from the under privileged class, and unlike her sister and brother Rimsha is confined to the four walls of her house. She never goes to school and mostly stays at home doing chores for her mother.

On Wednesday, August 17, she was sent by her mother to burn the trash. However, a neighbour accused the poor child of burning Quranic verses. The women of the neighborhood gathered and began beating her mercilessly. An angry mob joined in. As they were about to set her and her mother on fire, the police arrived. Someone in that rabid crowd, with some humanity left in him, had called the authorities. The police took away the battered child and kept her in a look up, with mostly adult males. Rimsha was then shifted to Adiala Jail, while the judiciary and most of the media are obsessed with the ‘Swiss letter’,  Rimsha waits for justice. If this case is not fit for a ‘suo moto’ than it is difficult to know what is?

All these children in the photo come from the over 300 families displaced by the horrific incident that took place in Mehrabadi. They are victims of the madness of intolerance that overtakes Pakistan in the name of our beloved Prophet. Some of these children have returned with their parents , the others have stayed back with their relatives, they fear they will be burnt alive like the victims in Gojra.

These displaced families returned after assurances of safety by their Muslim land lords. But they have returned to a very hostile environment where even before this incident the local cleric had  started a campaign of getting rid of them. This is the time to diffuse tensions and refrain from creating more hatred. The government, media and the activists have to tread carefully not to create more disharmony. The government has to make sure not only Rimsha gets justice, but the security and safety of all the families who were displaced is ensured.

While it is vital to reform the blasphemy laws and remove all the changes made by the military dictator Ziaul Haq, the great friend of the USA and Saudi Arabia, I am not hopeful that the reforms alone will bring about real change. It is not just the law that has been changed by this ruthless fanatic attitude – the very fabric of our society has been transformed. Pakistan has been socially engineered to create a ‘Fortress of Islam’, that too representing only one sect of Islam. Funded lavishly in dollars and riyals, the process of Islamisation poisoned the school curriculum stripping it of any semblance of ’tolerance or pluralism’.

Rimsha will not be the last child victim of the ‘blasphemy law’. No one is safe, not even Muslims because the innocent accused is helpless while the false accuser is rarely brought to justice .

Sacred Quranic verses are irresponsibly scattered throughout the printed material available in Pakistan.. Quranic verses are strewn all over newspapers especially those in the regional languages. They are on the first page of many ABC books for children. They appear in urdu, social studies, geography, history and even science books. Thus they have the potential of becoming death traps for little children and the illiterate.

Next time, we should not be shocked when an even younger child is accused of blasphemy. Her or his ‘disrespect’ of holy scripture will bring even worse treatment than Rimsha’s. In this case, the law will not make a difference. The monster our society has become has to be exorcised and  its integrity restored so that ‘secular’ is no longer a ‘dirty’ word.

While I commend the clerics who have condemned this madness – and indeed it is unprecedented –  it is very hard to be hopeful that another child will not face what Rimsha did.

In this, my wish is to celebrate next Christmas with Rimsha.  I just hope  it becomes a reality

The founder of Funkor Childart Center through which she has worked extensively on community based art projects with children promoting interfaith harmony.