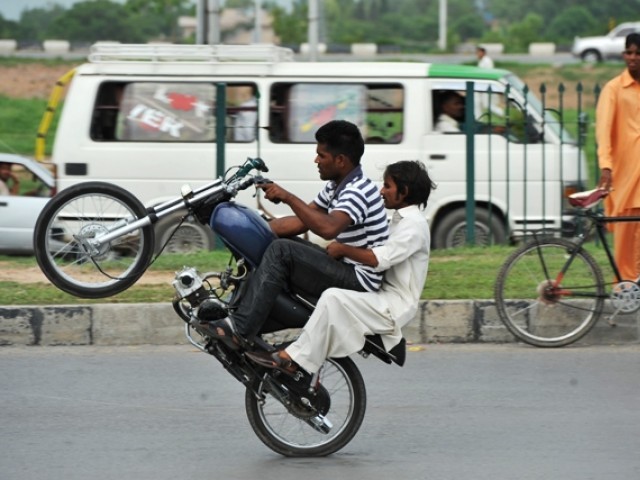 The Excise and Taxation Department of Sindh has finally started issuing official registration plates for motorcycles purchased as of July PHOTO: AFP

In a third world country like Pakistan, where successive governments have failed to provide a reliable transport system, motorcycles tend to be the lifeline for masses.

Take the example of Karachi, which accommodates more than half a million motorcyclists every day. While the number of motorcycles has increased in recent years at a phenomenal pace, the government and traffic regulators have made no efforts to bring discipline in this realm.

The Excise and Taxation Department of Sindh has finally started issuing official registration plates for motorcycles purchased as of July – an initiative one must appreciate as it could provide traffic police with the rationale to crack down on newly registered motorcycles if their riders fail to display official number plates. However, the greater impact of this positive move may not be seen unless the government also issues official registration plates for motorcycles registered prior to July 2012.

Within a few minutes’ observation, one finds dozens of motorcycles displaying all kinds of registration plates: ‘CDGK Staff’, ‘Sindh Government Employee’, ‘Sindh Police’, ‘KW&SB Staff’, and so on.

It merits mentioning here that motorcycles with improper or no number plates are used in street crimes and in target killings. It is, therefore, high time the government brings some discipline to this chaotic state of affairs. All motorcyclists should have uniform blue and white official registration plates with the government stamp.

I recall my visit to Kathmandu during my days as a traffic reporter. The country was going through severe crises: 12 hours of load-shedding, massive shortage of petrol and deep political trouble. However, all motorcycles still bore uniform, red-coloured number plates.

If one takes into account the number of motorcycles registered here before July 2012, it easily exceeds 500,000. Unless the government issues official number plates for old motorcycles, it will remain a job half done.