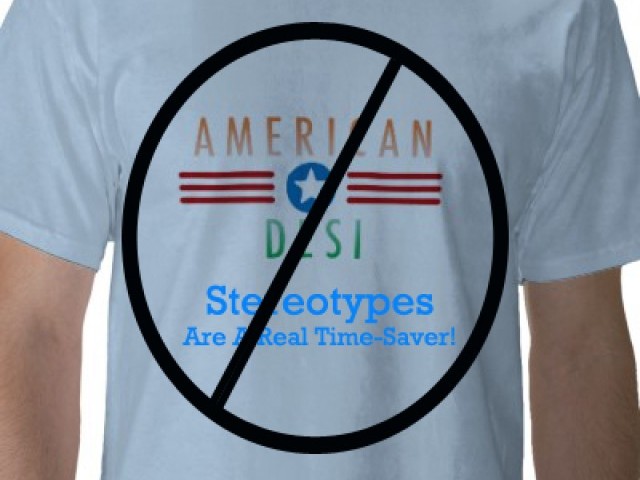 No, I do not live in a mud hut. Don’t ride a camel to school either, that would be the Middle East, and they don’t do that either. Yes, yes, I’ve seen an Xbox before. DESIGN: ERUM SHAIKH

When I was 12-years-old, I visited my aunt in the US. During this trip, I tagged along with my cousin, who is barely older than me, to participate in a very American pastime: we hit the mall. There, we bumped into his desi American friend and I was introduced as the cousin from Pakistan.

His friend turned to me and said,

“Aap ko angrezi ata bhi hai? (Do you even know how to speak English?)”

He enunciated every word loudly, as if I were deaf.

I was 12, and this made me bristle with anger.

I replied very stupidly. The boy simply laughed. If I had been smarter, I would have corrected his Urdu saying,

If I were really smart, I would have ignored his comment. Not knowing English isn’t a crime, but I knew what the boy was referring to – his own stereotype of Pakistanis as ‘fobs’, or fresh off the boat.

I’m 18-years-old now, and I’m visiting the same aunt again. And I’m still trying to battle stereotypes present in the minds of both desi and non-desi people in the US. Maybe I’m not self-conscious about looking ‘stupid’, but I find it peculiar that I’m already predefined, no matter what I say or do.

So yes, I do come from a country in the Global South. No, I do not live in a mud hut. Don’t ride a camel to school either, that would be the Middle East, and they don’t do that either. Yes, yes, I’ve seen an Xbox before. Yes, some women wear burqas. No, there’s no ban on jeans.  Yes, women drive – it’s not Saudi Arabia.  No, I’ve never met a terrorist, but, um, I’ll let you know if I do?

One desi kid told me sweetly.

“So, like, my mom is from this place in Sindh, and she kinda’ told me there were no bathrooms there,”

“No, Sindh definitely has bathrooms,”

And then there’s English. No one cares whether I speak in Urdu or not, it’s my ‘abc’ that’s got everyone impressed.

“If you went to a Pakistani high school, how is your English so good?” asked an extremely polite salesman at RadioShack while selling me plug adaptors.

I had no answer.

“So, your middle name is Mohammed and your last name is Ali? Tough luck getting that American visa,” someone told me flatly.

“Don’t take any paindoo shalwar kameezes with you,” another suggested.

People abroad seem amazed by you, but people back home seem resentful or self-conscious or both.

I don’t know if I am living up to the stereotype of what a Pakistani is. However, I do know that there will be several Pakistanis willing to explain, in extremely negative detail, exactly what foreigners think we are. I know that I am less exasperated and more amused now, though I wonder where the good humour is coming from, and where the ‘jazbaati–pana’ that my 12-year-old self and other countrymen possess went.

Maybe it evaporated in the past week because I have been acting as a mouthpiece for my country and answer every single question my cousin, who has never been to Pakistan in his life, asks me.

“Wow, mom doesn’t talk about Pack-is-tan like that!” he exclaims.

He still makes fun of my accent and the smatterings of Urdu that creep into my speech. I can’t help it – maybe I really am playing to the stereotype of a ‘Pack-is-tani’. And I guess that’s ok.