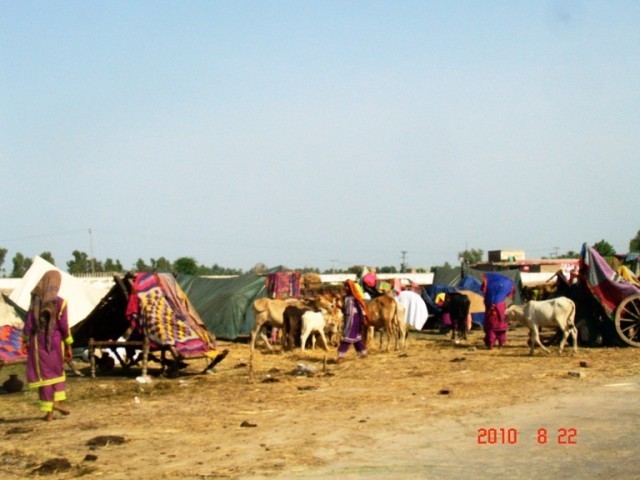 Flood victims pooling their resources together to survive, especially livestock

During our descent towards Sukkur Airport, all heads in the cabin peered over shoulders and towards the windows to catch a glimpse of the floods’ devastation. Gasps abounded as the Indus suddenly appeared below in placid, expansive pools engulfing everything that had once been land. All that was now visible was a shapeless, silver deluge shimmering in the evening sun, dotted occasionally by green treetops. Brown, rectangular roofs of what had once been homes or schools now lay empty, abandoned and completely lifeless. There wasn’t a figure around, not a soul visible from our vantage point in the air. Those that once lived there before these serene waters uninvitingly arrived were now either resting permanently under its voluminous waves or had fled to higher ground.  It was a stunning and uncomfortable reminder of the magnitude of this disaster.

Waiting for a miracle

The drive from Sukkur Airport confirmed everything portrayed in the media. From the moment we exited the airport’s compound, the only thing visible were people by the roadside. Hordes were crammed on both sides wherever space was available, encroaching near canals or on the road itself, settling themselves in for an indefinite stay.  I saw a few kids washing themselves with buckets of fetid water as mothers fanned flies away from their infants faces. Many sat staring aimlessly under the stifling heat. Others bemoaned their unfortunate situation and supplicated for alms as we drove by. As we progressed, the road got exceptionally crowded as an aid truck arrived dispensing cooked packets of rice. Men, boys and those in between swarmed and surrounded the truck like flies, their eager arms outstretched toward the sky as multitudes raced to get a piece of the action. Those fortunate enough to receive something ran back triumphantly, their smiles stretched from lip to lip.

Scenes like this dotted the drive to Shikarpur. Often, our journey was arrested by herds of black, solemn buffalo trudging along slothfully. When the drenched, verdant farmland gave way to parched, earthen land, there we found fields of tents organized in geometric order. Some were gray or white, others were black and some were UN white and blue. Besides us, vans, minibuses and coaches roared by, packed to the brim, some with bundles and charpais on their roofs as huddled families with uncertainty in their eyes searched for places to find relief. Donkey carts and motorcycle rickshaws packed with possessions like fridges, fans and pots lethargically crawled along with no finite destination in mind. Beside the road, posters of local politicians heralded the heights of colorful shamianas where hundreds and hundreds swarmed together like ants seeking shelter of any kind. The look on their faces told a thousand stories. Some seemed lost in confusion and disbelief while others had painted expressions of abject desperation. Was it even possible to feed just those on the road, let alone the 17 million now in desperate need of our help?

Meanwhile, the women who sat by the roadside minding their many children kept watch over whatever bundles they had managed to salvage before their ephemeral flight. Many of them had dexterously maneuvered their charpais in various upright positions to escape the anger of the sun. They cooked on brushwood fires nestled between bricks. Clad in traditional blues and purples, yellows and reds, this was the only clothing they will wear for God knows how long. Children scampered barefoot or half-naked, playing amidst themselves or sitting with dazed and confused expressions, searching for a release that carried them away from this reality. Some men strode around, sitting and chatting by the side of the road while others scrambled anxiously for food. Others sat idly, waiting for something to fall into their laps.

A sense of helplessness

If someone were to ask me what I thought Partition was like, this was it. Millions of people stranded in the midst of chaos knowing not where they were headed. Some had been industrious and managed to erect rickety tent-like homes from sticks and rope, draped with colorful, ethnic cloth and hay. Upturned bullock carts stood as reminders of a people unaware of time, unaware of modernity, carefully attending to their calibrated, agricultural routines just as their ancestors had done for centuries. Now with their land gone, their homes and livestock vanished, would they ever return to the lives they once knew? Or would they embrace the tumultuous modernity awaiting them rudely in Pakistan’s more modern cities? Were they wondering about their government’s snail-like, semi-vigorous response to their plight? Were the aware of the international community’s apathy towards their misery? Or perhaps they were just like those pilgrims from partition, merely concerned about being accepted and accommodated in a new place where their basic needs were fulfilled.

The complexities of life

The scenes I witnessed on the drive to Shikarpur were equally Kafkaesque and tragic. Some families’ surviving livestock mingled amongst them as one of their own progeny. Vibrant children played happily atop trash piles and dung heaps. Grown men viciously fought children for chucked ration and food. Elsewhere, bags of rotting, half-eaten rice lay strewn about carelessly. Soldiers atop army trucks hurled sprays of bottled water in the blistering heat to quiet the throngs surrounding their vehicle by the score. On the same truck, I saw a thick, brutal wooden pole being swung down mercilessly at their heads to keep them in order. It collided with a head that subsequently disappeared amidst the crowd. I wondered if this was any time for our national forces to wound and cripple our already beleaguered people.

I saw an emaciated man struggling to lift a white jute bag of ration upon his shoulders while young boys raced past him in a flurry. Between them, stray dogs lurked, watching, waiting.  Not one of us could imagine scenes so macabre and grotesque, so laughably surreal yet emotionally tear jerking on our country’s descent towards darkness. As I would discover, this was just the beginning.

Love is more than roses: The legends behind Valentine's day