Did the KGB kill Zia? 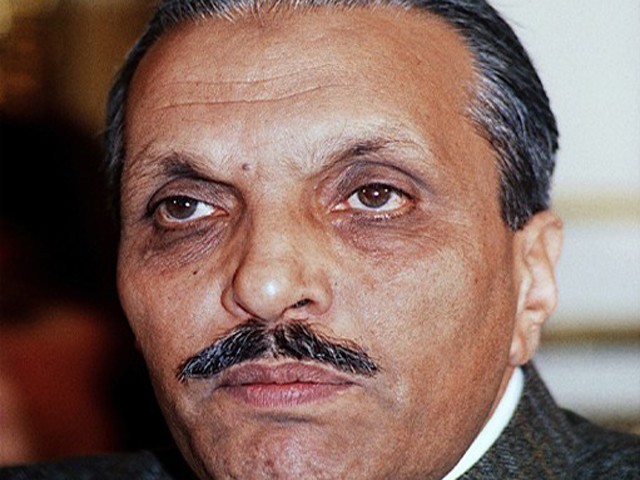 Zia, due to the geopolitical circumstances, was afforded a long list of possible enmities. To put things in perspective, he had been targeted on at least six previous occasions. PHOTO: FILE

This year marks the 24th death anniversary of General Ziaul Haq. His airplane called PAK-1 (Model C-130 Hercules) crashed on August 17, 1988 about five minutes after taking off from Bahawalpur (Zia had flown there to witness a US M1 Abram’s tank demonstration).

Zia, due to the geopolitical circumstances, was afforded a long list of possible enmities. To put things in perspective, he had been targeted on at least six previous occasions including an especially close save form a missile fired at his plane. The broad spectrum of his enemies ranged from the Bhutto family domestically to the Red Army fighting in Afghanistan.

In his book “Ghost”, Fred Burton (now Vice President for Counter Intelligence and Corporate Security at Stratfor) provides a compelling insight into the investigations jointly carried out by the Pakistanis and the Americans, to which he was a part of  as the senior investigator on behalf of Diplomatic Security Service (DSS). Two Americans diplomats (American ambassador to Pakistan Arnold Lewis Raphel and Brigadier General Herbert M Wassom, the head of the US military aid mission to Pakistan) had also lost their lives in the crash.

A common misconception is that the two Americans were persuaded by Zia to accompany him. This can’t be any less true as Mel Harrison (US embassy’s Regional Security Officer), admitted to Burton that the American ambassador had swapped places with him on the final minute as he wanted an opportunity to discuss with General Zia an attack on an American nun.

The investigation team started ruling out the different causes one by one. The weather was hot and clear and any chance of lightning striking the airplane was ruled out. The aircraft was fuelled at Chaklala Airbase and any possible contamination was checked for with the remaining fuel at the base and that was ruled out too. Two crates of mangoes and couple of model aircraft were brought on board all of which were visually screened only. A bomb aboard, however, was also eliminated as an option due to the lack of any signature damage found in cases of a bomb explosion and also because of the small wreckage radius. Moreover, the autopsy of Brigadier Wassom showed that he had not inhaled any smoke which proved the absence of any large fire or an on board explosive.

Methuselah, witness to the final minutes before the crash, told the team that the plane had started moving up and down mimicking the movement of a roller coaster until the crash. This meant the crash was not deliberate. He also stated nothing from outside had hit the plane. Based on this testimony and lack of any other credible evidence at the crash site, a missile hit was also crossed out as an option.

Strangely, a cockpit voice recorder wasn’t installed on the plane but the communication tower testified that the correspondence with them was routine and the pilots had not issued a Mayday. However, the Cessna security plane flying ahead of PAK-1 did hear a momentary transmission from PAK-1 just before it crashed. Someone inside the aircraft had shouted ‘Mash’hood! Mash’hood!’. The commanding pilot’s name was ‘Wing Commander Mash’hood Hussain’ and was handpicked by General Zia himself. The Wing Commander and the co-pilot were in top mental and physical condition to fly the  so pilot error was not possible either. The tower reported, however, that it was not the co-pilot but someone from inside of the VIP suit had screamed the commanding pilot’s name.

So it boiled down to one of the two things; either there was some sort of a mechanical disaster or someone had taken out both the pilots before they could even manage a distress call. The auxiliary systems made into the Hercules can allow for very rough circumstances and an absolute loss of control due to the failure of one of the systems was rather implausible. Plus, the airplane had only flown less than 50 hours since a major overhaul. In contrast, incapacitation of both pilots would explain the absence of the distress call which would have certainly been made had it only been some sort of technical failure giving the pilots ample time to react and make that call.

Several chunks of the debris were sent to the Federal Bureau of Investigation for further examination in the US. The striking conclusion the results led to was that the plane had not crashed of a mechanical mishap. Most importantly, their tests revealed traces of several sinister elements namely antimony, chlorine and phosphorous in the cockpit. I quote Fred Burton here:

“Antimony. Phosphorous. Chlorine. All are ingredients in various types of nerve gas… Somebody planted nerve gas in the cockpit. This can only mean one thing: President Zia and his staff were assassinated.

… During their own investigation, the Pakistanis conclude that a small detonator had been aboard the plane. Attached either to a timer or a barometric pressure device, the detonator touched off a very-small-yield explosion, perhaps just big enough to blow the top of a Coke can placed on the flight deck. The interior of the C-130 is so loud I doubt anyone would have heard such a small pop.

But that’s what killed the pilots.

…The pilots never knew what hit them. The crash team determined that the pilots were not wearing their oxygen masks at the time of the crash… That rules out a poisoned oxygen system and lends much more weight to the Coke can theory…

… Now all that’s left is to figure out who did it.”

He argues that at the time only three intelligence agencies had the capability to carry out such a sophisticated assassination; CIA, Mossad and the KGB. RAW was not deemed to have the competence to carry this out.

Since Zia was America’s biggest Cold War ally after Britain, the lack of motive gets CIA off the list of suspects. Due to the nuclear program, there was considerable tension between Zia and the Israelis, who had also taken out Iraq’s nuclear program in 1981 with a stunning air raid that signalled to the rest of the Muslim world that Israel was prepared to go to any length to ensure that an Islamic country did not get the bomb. However, since Pakistan had already acquired full nuclear capability much before August 1988 (mainly due to the blind eye US had towards the Pakistanis), killing Zia belatedly made little sense; so Mossad was struck of the list too. That left the KGB on the suspect list.

The KGB had a history of using special chemicals for killing (Georgi Markov assassination), it also had the  operational capability, coupled with the possible  help of Indian intelligence, aided with a very casual security at Bahawalpur or elsewhere (the plant at Chaklala gave access to C-130s for maintenance routinely this puts forth the idea of a bear trap) gave them the golden opportunity to carry an assassination out.

Much about the intelligence agency responsible for carrying out this assassination would have been left at only speculation had it not been for Colonel Sergei Tretyakov. He was the highest ranked officer to defect the SVR (ex-KGB) to the United States. In one of the most interesting leaks by Wikileaks of Stratfor emails shows that Colonel Tretyakov confirmed to none other than Fred Burton himself, that KGB had indeed assassinated  Ziaul Haq. Not only that, this assassination is taught as a case study at their intelligence academy.

The author is an IT guy with a lot of interest in international politics and workings of intelligence agencies.