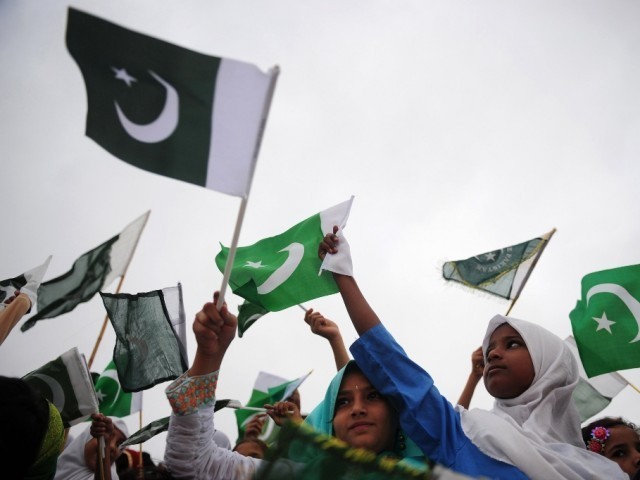 Whatever we are, we’re mighty proud of it—just like we should be! PHOTO: AFP

Finally, after months of struggle and heaps of derision and negativity, I complete the challenge I laid out for myself last year: to compile a list of 65 things that make Pakistan so special.

I don’t know if I’m taking much away from this seemingly futile exercise, but one thing is certain: in a small, feel-good way, I think it has served its purpose by rekindling that flickering flame of patriotism and respect for the one certain thing in my life that is my country, my home, my Pakistan.

My dear Pakistan, may you live long and prosper.

Pakistan had always been blessed with some great Urdu writers, but the country has recently started churning out a rather impressive squad of young English authors that have accrued much local and international interest. They have won rave reviews the world over, and in one much celebrated case, evening scoring a larger-than-life Hollywood movie deal. Bring on the local literature festivals!

The seventh largest military force in the world in terms of active troops, Pakistan Armed Forces—which includes Pakistan Army, Pakistan Navy and Pakistan Air Force—have kept us safe and out of harm’s way through four full-fledged wars. It has also countered countless other polarised conflicts since our independence in 1947, and it’s time we get off our high horse and pay due respect to the thousands of jawans who’ve laid down their lives for us and this country.

Someone once said that one of the measures of the goodness of a nation is its level of civil engagement. By that logic, I’m proud of the fact that we’re perhaps the most benevolent country in this part of the world! According to South Asian Investor Review, we lead the South Asian pack when it comes to charitable giving. We contribute around Rs150 billion—nearly 1% of the nation’s GDP—every year to some of 162 PCP certified NGOs that operate inside this poor, neglected country we call home.

Granted Zubaida Apa has somewhat ruined their charm for most people, but it’s really amazing how Pakistani grannies have a totka up their sleeve for literally everything. From runny noses and hair fall to revamping a week-old saalan to make it look fresh for tonight’s soiree; or manipulating the maasi into becoming a submissive robot; they know it all! Really, if you want help with it, granny’s got a totka for it!

From the iconic embroidered Kashmiri dresses, khussas (shoes), hand-painted earthenware of Multan to the famous bangles and rullis (block-printed shawls) of Hyderabad, Pakistani handicrafts are unique and breathtaking. They are very popular, both locally and among visiting foreigners. Incidentally, our textile and leather industries are second to none, too, despite the fact that they generate far more pride for Pakistanis than they do income!

We might dislike our next door neighbours and Amreekans with all our might for reasons that aren’t entirely unjustifiable. But let’s face it: we sure know how to put up an exemplary show of warmth, hospitality and cordiality if someone from either place—or any other country for that matter, especially if they’re fair-skinned and blonde!—should ever decide to visit.

He was the first and only Pakistani to win the esteemed Nobel Prize in physics for his contribution to the unification of electromagnetic and weak forces in 1979. It’s a pity Dr Abdus Salam didn’t live to see Pakistan become a nuclear state in 1998, but his legacy lives on. He is widely, and rightfully, remembered as an amazing human being and the undisputable father of Pakistan’s school of Mathematical and Theoretical Physics.

Pakistan may not have inherited a lot of the historic monuments and buildings that made pre-partition India so special, but we’ve been extremely fortunate in the ones we did. This 15th century marvel is one of them. Many other magnificent samples of Islamic-Persian-Hindustani infusions that were inherent to Mughal architecture that are sprinkled across the country. These are a testament to just that! Not only is Badshahi Mosque the second largest mosque in Pakistan and South Asia, it also holds the title of the fifth largest and one of the most visually attractive mosque in the world!

59. The Kalash valley and its beautiful people:

Claiming to be progenies of Alexander the Great, these indigenous people of Chitral are certainly as unique and marvellous as they look. With their rich cultural rituals, festivals, religious practices and those stunning long black iconic robes embroidered heavily with colourful beads and cowrie shells, the people of Kalash are one of a kind. And even though we, as a nation, might not have done much to preserve and revere this extraordinary community like it deserves, it’s still nice to know they’re there, and that they’re a part of Pakistan.

60. Our pride in our identity:

One of my readers pointed this out and I couldn’t agree more: We say we’re Middle Eastern but the Arabs say we’re Persian; Persians say we’re Afghan but the Afghans say we’re Indian… when all we really want—wish, rather—is to be some sort of gora!
The debate is never ending and usually ends in a heap of doubt and confusion… but one thing is clear: Whatever we are, we’re mighty proud of it—just like we should be!

61. The famous Anarkali in Lahore:

I’m sure Pakistan’s love for Anarkali bazaar’s food, clothes and traditional handicrafts has little to do with the fact that it happens to be the oldest surviving market of South Asia and one of the biggest business centers of the country. However, these facts do make this hub of our rich Lahori culture a very special Pakistani landmark indeed!

This monumental minaret in Iqbal Park Lahore is a 200ft reminder of the official declaration to establish a separate homeland for the dejected Muslims of the Indian subcontinent. Today, when it’s not serving as a suicide hotspot for Lahoris, its purlieu seconds as a meeting ground for political revolutionaries and, well, sneaky couples out on daytime dates.

The beautiful, special, accommodating language that is Urdu.

It’s funny how we Pakistanis spend the 364 days up till August 14 every year. We are in a perpetual state of spite for the way things run in this country, and then miraculously develop a softer than soft spot for our beloved watan on the eve of the independence day. We virtually forget and forgive all the things we so despise and all ready to start afresh by singing and dancing and watching cheery TV shows like we’re either newborns with hope and patriotism in great abundance, or oldies with a severe case of dementia.

Yes, he was the man whose confidence gave a nation of crestfallen minions the best gift they could have wished for: hope. His multidimensional personality and astute political prowess earned us a home and identity. His good looks and unrivaled taste for fine things made him an absolute standout among his counterparts as well as in the league of legendary founding fathers (think George Washington and Mohandas Gandhi, both of whom pale in comparison!). This man left us three simple words and a gamut of lessons to live by… the man who left us all too soon: Quaid-e-Azam Mohammed Ali Jinnah, thank you, for everything!

An Economics graduate with a post-grad in International Relations who’s currently pursuing Chartered Accountancy while working as a freelance writer for a number of local publications.