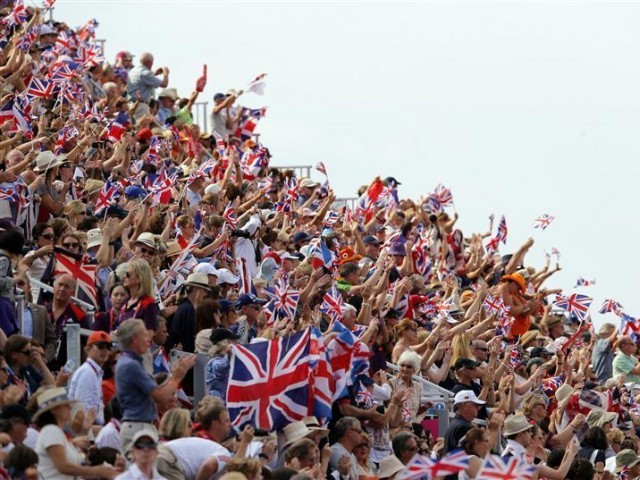 Live sites around the city attracted thousands every day, providing the opportunity to catch all the action on screens across the capital. PHOTO: REUTERS

Before the 2012 Olympics began, London’s mayor, Boris Johnson was proclaiming to the world that the games would show that it is ‘a great time to be British’. Two weeks later, I can safely say that if anything, I think it was a great time to just be in London!

It was as if the games had permeated every nook and cranny of the city. I will be honest, before the games started, most of us were unsure of how successful they would be. There were public transportation nightmares, security personnel glitches, bustling crowds, and for a while everyone had their fingers crossed. All this time, the organisers kept assuring us that everything would go according to plan. I wish we would have all believed them then!

The tourists started pouring in a few weeks ago and street by street, shop by shop, the games firmly entrenched themselves in the fabric of the city. For the first time I found the weather being replaced as the most popular topic of conversation. Finally, it was the day of the opening ceremony, and what a show Danny Boyle put up!

From the most enviable cameo ever done, with the Queen joining in with a certain Mr Bond, Mr Bean showing the world a glimpse of classic British humour and a grand celebration of everything British – the opening ceremony turned out to be a charming affair.

As the games went on, live sites around the city attracted thousands every day, providing the opportunity to catch all the action on screens across the capital. On the second weekend of the games, entirely despondent after not getting a ticket to the main Olympic stadium, I headed to Hyde Park. Anyone who has laboriously struggled over the last few weeks to get tickets would share the pain and agony.

The ‘oohs’ and ‘aahs’ from the morning’s encounter between home favourite, Andy Murray, and tennis’ finest, Roger Federer gave way to a smattering of doubles tennis, cycling and finally athletics. As the all-important hour approached to crown the fastest man in the world, the screening areas could easily have been mistaken for a square in Jamaica. Supporters enveloped in national flags and chants of “Usain! Usain! Usain!” drowned any other noise. It only became louder as the race started and ten seconds later, thousands had erupted in a joyous celebration to mark the making of a legend. Usain Bolt had become the second person in Olympic history to have defended his 100m title.

The other days at the games were equally exciting and extraordinary. Britain and the world saw how Mohammed ‘Mo’ Farah, a migrant who came to Britain as a child from Somalia, not able to speak any English, struck gold not once but twice in athletics to become a living example of what opportunity can do for talent. His was not the only memorable story though. Kiprotich, the Ugandan marathon runner who moved to Kenya as a 17-year-old to train, crossed the finishing line victorious after a gruelling marathon in one of the last Olympic events. Grenada put themselves on the sporting map by getting their first medal ever (and the nation getting a day off to celebrate!). These are the tales that have added the human touch to these games.

The excitement was not limited only to the games’ venue though! One morning last week, as I stepped off the train on my way to work, I found my face plastered with a silly smile. I had been able to meet and speak to sportsmen from the Ecuador team, dancers going for rehearsals for the closing ceremony, a group of housewives who were volunteering at the Olympic Village and even a couple of Aussie supporters dressed up as kangaroos!

The deal was sealed on Sunday night, when London 2012’s closing ceremony took audiences around the world on a spectacular journey through British culture and music ─ a befitting way to bring the curtain down on the world’s biggest sporting extravaganza.

I, for one, was happily swept away in the Olympics frenzy. Admittedly, I would not have a clue about who wins the triathlon world championships or who the number one ranked shooter is. But this Olympic time, I found myself and most others being sucked into the brilliant performances being put up.

Athletes from around the world, inspired billions in their homelands and across the globe into striving for the best, playing fair, and working towards the honour of their country. They were truly living the Olympic ideals while putting up one of the best shows of sheer human brilliance.

London lived up to the expectation to throw the biggest party on the planet, welcoming everyone to share the greatness of the 30th Olympiad of modern times. And I am sure the world had a good, good time.